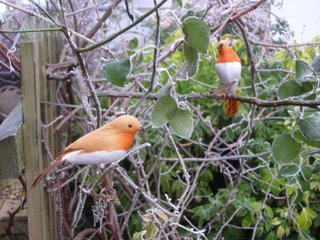 Charles Dawson wrote about this year’s annual fuss about this time of year, its meaning and its potential to cause offence. Many bloggers have had a little moan about the season so I thought I would join in.

Before I do though, as you can see, I saw my robin in the garden again today, this time with his mate. Aren’t they sweet? They are extraordinarily tame. Anyway…

There is only one thing which bothers me about Christmas, and that is anyone who tries to tell me what it is, how I should celebrate it and what it should mean to me. Christmas belongs to everybody. So there.

So okay yes, the most commonly used word would indicate we are celebrating the birth of Jesus Christ who some folks understand to have been the Saviour of the Universe (or was that Flash Gordon?). But much of what Christmas looks like, including what time of the year it falls, owes itself to our much older pagan traditions. And then there is the Victorian influence; all our idealised images of Christmas festivities borrow heavily from A Christmas Carol, and centre around an open fire and Prince Albert’s Christmas Tree.

And then of course, there is the massive commercial influence (influence more in the sense of applied pressure) of our more affluent times. Lady Bracknell has commented on the bizarre concept that a family might feel compelled a new sofa or carpet for Christmas. As for the suggestions for Christmas presents from various shops that have arrived in my e-mail inbox during the last three months - I have been shocked! And only some of them appeared to be the correct size and shape to fit into a Christmas stocking…

All of which is not to say that the Christians are kidding themselves at all. Personally, most of the things I love about Christmas can be found in Church, adopted from more ancient cultures or not; the peace, the candlelight, the holly and the ivy, the choral music and then those concepts of Victorian philanthropy, updated to the idea that one way or another, Christmas is a time for reaching out to others, for kindness and warmth of spirit. Tidings of comfort and joy.

I don’t know many conscientious Christians who would say that things are of no value without faith in their Instigator. At least I am honest about this. And this is my culture, as I have written about before.

But Christmas as it appears today is a wonderful – if rather long in coming - compromise between the old religion, Christianity and other influences to our culture. So it is entirely in the spirit of the thing to take from it whatever you will. And that’s the most crucial point; whatever you will. Which includes taking a step back, having a peaceful time on one's tod if one so chooses. There shouldn't be any obligations, and there certainly shouldn't be any obligations to spend vast quantities of money, fix a grin in the company of people whose blood is their only commonality and to make merry. The only obligation is that of respect.
Posted by The Goldfish at 6:26 PM

To me, Christmas means turning the corner of the year, a much older tradition and a valid one.

Hey, we've survived this far, let us eat, drink and be merry and be good to one another for once, in case it's the last time, in case we don't make it through till Spring.

That's a feeling as old as humanity.

And if the Conveyor really does stop dead, that instinct will be valid again.

Hear hear Goldfish ... light in the darkness, peace, goodwill, and a sparkly Christmas tree, do it for me.
(Two robin white breasts in orange mufflers - ho hum.)

For years and years there were about 12 people around for Christmas Eve, which in Germany is the evening when everyone has a festive dinner and their presents and go to church at night. For us kids that was wonderful, but for my mother it must have been an utter nightmare. Now that most of the old aunties, grandparents, etc. have died, there are only six of us left: parents, brother and me plus wife/husband. Now we kids are doing the cooking whenever we feel hungry, we have stopped giving each other presents and we spend the night in front of the fireplace and the Christmas tree, playing games. Very peaceful, very relaxing!

BloggingMone said...
This comment has been removed by a blog administrator.
10:30 AM

(Not about Christmas, just so you know.)

The first time I saw one of your robins in a photo in a prior post, I thought it was an artificial bird made of styrofoam, wire and someone else's feathers. Just a little too perfect, you know? I thought you were having a little joke with us. And then I watched a British documentary on TV about searching for Shakespeare's Lancashire roots, and look! There was that same bird! Flying! With others!

So cool! So cute!

Your robins look very different from the birds we call robins. You probably knew that. If you want to look at pictures of our robins being rehabilitated from orphaned hatchlings to fledglings, visit the website of a friend of mine, a licensed wildlife rehabilitator here in Massachusetts, and hit the "Bird Photo Gallery" button in the menu at left. The American Robin is in the third column over, fifth one down.

Where yours look like little white finches wearing hooded scarlet ponchos, the mature American Robin is a large bird who looks as though he is wearing a brown suit with a red waistcoat. Every time I read about robins in English literature, I picture one of ours, though, not one of yours. Until I saw them here and then on TV, I don't think I realized how different ours were. I wonder if I will remember the next time I read, or if this has gone on too long and I will always see American Robins in my head when I read of robins, no matter who's writing.

Oh, how funny! I just realized that the ones in your picture are fake ("extraordinarily tame" indeed)! A HA HA HA HA

There are birds like this who live in England, though. I KNOW. I'VE SEEN THEM ON TV. (insert more hysterical laughter here)

I need more coffee. I hope your real robins come back strong, at the appropriate time, whatever they look like.

Incidentally, if it turns out these are real after all, I will not shoot myself, but I might go around twitching in an unsettling and unseemly manner for a day or two.

So Sara, are your robins associated with Christmas? The red-breasted robin is such a potent symbol of Christmas here, as often on Christmas cards as the holly or the Christmas tree.

I hope you have a lovely Christmas, anyway.

That's very interesting, Goldfish. Here, the robin is a harbinger of spring. They're big worm eaters, you see, and they can't do that when there's snow on the ground.

Do the robins actually show up in December there, or is it just a visual thing, something about the redness of their breasts blending in with all the red themes of the holiday season?

Obviously, I hope you have a lovely holiday, as well. :)