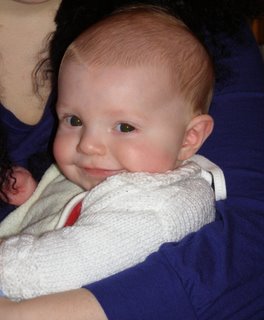 Naturally, the highlight of Christmas was seeing young Alexander.

Alex has changed a great deal since we last saw him, just six or seven weeks ago. He is much stronger, and is rapidly progressing to a stage where he can sit up by himself. Perhaps most usefully of all, he has developed the ability to take hold of objects (most of which he desires to put in his mouth to see what they feel like; his fingers aren’t nearly so sensitive as ours just yet). 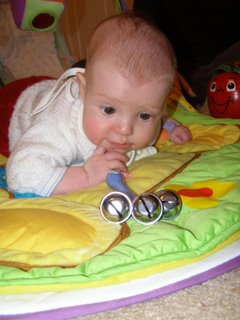 This meant that I only needed one hand to open my birthday cards, as if I got hold of the card and pulled, Alex would take hold of the envelope and begin to eat it while I slid the card free. He was very helpful, and I shall be sure to consider employing him for future tasks which I may need to perform one-handed, where it doesn't matter what gets wet. 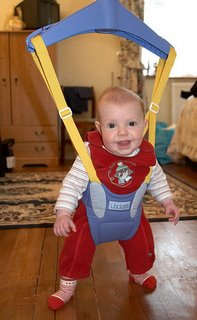 Alexander has also progressed with those all-important social skills. He is much better at focussing on objects of interest and most especially on faces. Whenever his gaze meets a face – whatever the face or the expression on it – he responds with a broad smile, a giggle and sometimes a scream of delight. This A stranger is a friend I am yet to get to know attitude is a very fine one and should endear him to all but the iciest of souls, people who he probably wouldn’t like to know anyway. 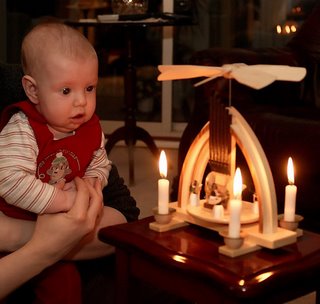 Apart from the occasional wimper when afflicted by wind, hunger or a wet nappy (and of course, a good cry when very much taken with fatigue), Alex takes joy in pretty much everything he does. His favourite hobbies are dancing, particularly The Hokey Cokey, riding a galloping leg to the tune of The William Tell Overture, bathing, looking at sparkly objects and the oral investigation of texture. 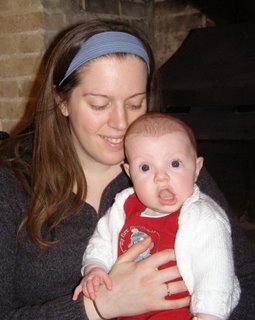 However, all this makes him very tiring to be around and slightly scary. He has so much energy and interest in everything that as soon as he can propel himself by some means, he will be all over the place. If this is the child at four months old, he will be completely out of control by this time next year.

Notice his eyes are getting darker. They started off deep blue, but I think they may be turning brown.
Posted by The Goldfish at 12:07 PM

Bless !
Glad you had a good one and are nearly over the sniffles.

Alexander is really lovely! He has such a nice smile, especially on the first picture. By the way, I have never seen a kid on a coat hanger before. Looks very practical...

What a sweet face!

In the US, we call the hanger the "jolly jumper". Great for high energy babies that want to move, but can't walk, crawl or sit! But you must have a strong threshold, preferable with no door to put it on with one of those claspy-men-toolkit-things.

My husband says its called a 'vice'