Here are some facts about the fictional character of James Bond as represented in the books and films:


Different creative people, different writers, actors and directors treat their subject differently. But here are some ways in which James Bond has always been the same:

A selection of outraged comments about the suggestion of Idris Elba as the new James Bond from the Daily Mail website, was making the rounds on Twitter (I found them so unlikely, I had to verify them. At Christmas time!). Among other nonsense, there are various demands that white actors be allowed to play fictional characters who had previously been cast as black.

So, in other words, just Shaft; a character who can boast only a handful of films, only one of which everyone saw. A character who has only ever been played by one actor (remember, Samuel L. Jackson played Shaft's nephew). A character who lives in the Harlem of the 1970s, whose friends, contacts and context are largely black. A character whose experiences are informed by the racism of his country at the time. Shaft is a big black private dick, who's a sex machine to all the chicks.

Shaft is black as Hornblower is white. Hornblower is a British naval commander in the 1800s. There were British black folk about during the Napoleonic Wars, but racism would make it impossible for a black man to have such social privilege and education, let alone become a naval officer. Hornblower is a great white naval nob, who never thinks of petticoat when he's on the job.

Other characters have far greater flexibility. There are examples of characters, previously played by white actors, played by people of colour without a hitch; the new Annie is black, the recent Ironside is black (though played by a non-disabled actor). Both Guinevere and Elyan in the TV series Merlin (although there are people of colour in the Arthur legend) are black and Lucy Lui plays Watson in the US version of Sherlock. The only production of Julius Caesar I've seen had an all black cast and was fantastic. Yeah, Julius Caesar probably had paler skin, but he also spoke Latin and he probably died saying, "Aaaarrrrggghhh!"rather than "Et tu brute? Then fall Caesar!"

Far far more often, literary characters are made white, or much paler, on our screens (just in the last year, see Noah*, Exodus: Gods & Kings and Half of a Yellow Sun). In the same way, disabled characters are either made non-disabled or played by non-disabled actors. The excuses are that there are too few actors of colour with box office draw and no famous disabled actors at all (maybe you have to get cast to get well-known).

However, the fact that the same industry routinely straightens out lesbian, gay and bisexual literary characters suggests another motive. There's a widespread belief that white straight non-disabled men can only tolerate movies and television shows where people like themselves predominate. This despite the fact that movies with strong female characters do very well indeed.

(Not that long ago, all significant characters were played by white folk. The most recognisable Othello on film remains a blacked-up Lawrence Olivier. Of course, in the earliest productions, even Desdemona was played by a white man. Times change. People change them.)

I'm not suggesting that we attempt to counter this erasure with a black Bond. I'm suggesting that if we can fiddle about with characters in order to appease the variously bigoted elements of the film and television industries, then there can be no argument about preserving the whiteness of a fictional character if there's an excellent non-white candidate.

Idris Elba would make an excellent Bond. Not all talented and charismatic actors can do it as there's a certain kind of charisma required. Even the omnipresent Cumberbatch has his limits. Elba is not the only candidate right now - Tom Hardy could do it, maybe Damien Lewis - but I can't think of anyone who would do it better. 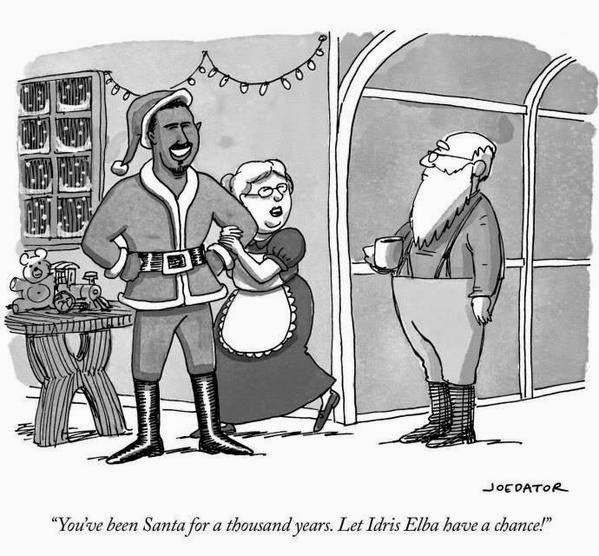 [A domestic scene where an older white lady clings to the arm of a tall black man in a santa outfit while an older white man with a long white beard looks on. The caption reads, "You've been Santa for a thousand years. Let Idris Elba have a chance!"]

It acknowledges that Idris Elba is a man of colour with an immense draw. But, well, who says Santa has been the same white man for a thousand years? Sometimes the Santa in a store grotto is black, as he is in Run DMC's Christmas in the Hollis video; he's just never black on Christmas cards or in movies. But he does change. He puts on and loses weight. He frequently restyles his hair and beard. He can be aged anywhere between about 35 and 80. He changes, possibly even regenerates. Is there any essential quality to Santa's character, context or behaviour that suggests whiteness?

And yes, on regeneration, the Doctor of Doctor Who could be a person of colour (though not Idris Elba - he too has his limits). The Doctor could also be a woman or non-binary, have a physical impairment or whatever else. Not should, just for the sake of it, but if an actor is right for the part.

We're talking fiction. Things still have to fit together; characters must be consistent, plots must hold. But the possibilities are as expansive as the silence that follows the question, "Why not?"

* The Bible makes no reference to Noah's race or his geographic location (unlike the story of Exodus, which is quite specifically not a time or place with a lot of Northern Europeans running the show). However, if you're going to recount a world-famous origin myth and you the resources of a major production, you have really four options:


These things do not apply if you're making a student film, a school play or a theatrical production with a small company. But in a big budget movie depicting a myth that belongs to a huge proportion of the world's population, the decision to employ an all-white cast supports a very particular world-view.
Posted by The Goldfish at 12:34 PM 1 comment:

Today, I am thirty-four years old.  Life is a lot better than it was this time last year. Obviously, the dead stay gone, but it has been a year characterised by healing. Healing is not the same as fixing, but there's been some fixing happening too. The greatest fix is that finally, Stephen and I have our own home which is one of the very best things that has ever happened for us. We have borrowed a Christmas tree and we're spending our first Christmas on our own.

When I thought about writing my birthday post, I thought, but that's it really. We moved. This entire year has been taken up by thinking, talking, planning that move, moving, then trying to get organised in our new place. I mentioned this to Stephen and he promptly corrected me.

My year in unordered bullet points:

Thank you all for being around.  Hope you have a lovely peaceful Christmas if you celebrate it and a very happy New Year.
Posted by The Goldfish at 1:51 PM 3 comments: