When I arrived in Wales, I was allergic to the two cats I was moving in with. I knew it was a temporary reaction, just not being used to the things, but I didn't imagine I'd need have much to do with them at all. As I wrote a couple of years ago, I don't like cats. Most of my friends, past and present, are cat people – the friends I am living with are cat people – but I have never been one to confuse cats with people. Cats are animals. Animals are not people.

But I hadn't reckoned with the power of Pudding. Pudding's owner - no, that's not right. Nobody owns Pudding exactly, but my friend L does at least own the house we all occupy and buys his food. Anyway, L had warned me that Pudding's single goal is world domination, to be acquired one person at a time. I was dismissive. Now I have my doubts.

Pudding is a rather special cat. Given my relationships with cat people, I had encountered more than my fair share of cats, but none have been as friendly, none as downright flirtatious as Pudding. Pudding pounces on you, purring before you've even touched him, rubbing himself against you like your clothes and skin are the most delicious texture he has ever encountered. Resistance is futile; place him on the floor and he will return to your lap, refuse to fuss or stroke him and he will force his head under your resting hands.

Pudding sits around most of the day and eats more than he should. He is a big fat cat - I'm currently away with my young man and his two poodles and I'm sure Pudding would flatten both poodles in a fair fight. I'm quite sure he weighs more than the two little dogs put together.

Pudding doesn't scratch; having been born in the US, he had his claws removed (!) as a kitten. So it is not such a bad thing to be kneaded when he wishes to make my lap more comfortable. And being somewhat tubby, he doesn't move too far and doesn't bring me many presents. Thusfar, I have received a single swallow and I have my doubts that it wasn't found dead rather than caught. I have seen a red kite evaded by a flock of swallows, so quite how Pudding could have slain it, I'm not sure.

After I had lived here all of three or four days, Pudding started crying at my door at night. Sometimes at my window. For such a great hulking bulk of a cat, Pudding's meow is rather high-pitched, almost effete. Certainly unignorable. And so he started being allowed in my room at night, and then he'd climb on the bed. Then growing ever bolder, he'd climb under the bed covers. And thus, I found I had been taken in. 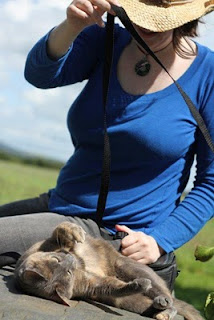 My other feline housemate, Booboo, is a very different character. At first acquaintance, she seemed rather stand-offish. Now I realise she merely pretends to be independent and unsociable in the cast of most domestic cats I have met. She rarely climbs onto one's lap and she does consider both fingers and writing impliments to be legitimate prey. Especially when a person is trying to do something with said fingers or writing impliments.

But she does not wish to be left alone. She keeps her distance but follows me around and if ignored for long enough, she begs for my attention. She also cries at my door at night, although her greatest desire for intimacy is to sleep on the end of the bed beside my feet.

Despite a long acquaintance-by-proxy with cats, I have only begun to really get cats this year. I now recognise their considerable appeal. And their downright spookiness. The cats know things that they ought not to know. The cats turn up whenever I am distressed. The only time they won't sit on the bed is when I am in particularly great pain and they'd be in danger of hurting me - I don't need to shoo them away, they just won't get that close. And they get a little weirder than that. One day Pudding startled at my hallucination. It didn't startle me; these things happen. It was just a vague small thing that I knew wasn't there, moving between two points and then vanishing. But Pudding turned suddenly and watched the point where it disappeared for a moment afterwards.

So cats are spooky in ways I can't fully explain with my rationalist materialist outlook. All I do know is that my clothes are now covered in cat hair.

---------
Thanks to everyone who commented on my post in June and who has e-mailed. I am very behind with all correspondences but your support is most appreciated.
Posted by The Goldfish at 7:55 PM 8 comments: