I was supposed to announce the winner of my Name That Pirate Competition yesterday. I know, sorry! Our friend H came round yesterday evening and all my systems started to shut down in the afternoon, which threatened a complete disaster as his entire purpose for coming was to consult for me on how to set up his mic and use sound editing software. Managed okay though in the end. No awkward questions about what has been going on in my life during the last seven months. 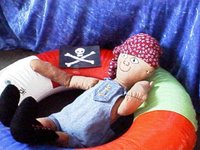 So anyway, I am pleased to announce that the name of the Pirate is… Kettle! as suggested by Charles Dawson.

Kettle received three out of four votes; Rosie objected because she reckoned keh sounds are very difficult for a child to make as famously I could not pronounce words beginning with C or K for some time, until I was miraculously cured during a particular episode of Mr Ben. She also thought that it could be confusing to give a toy the name of another commonplace object, but honestly, the child is already about six inches long now, it is about time it learnt to cope with such a minor paradox. 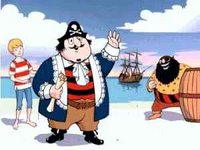 Rosie preferred Gimpy Mumpy’s Pat or Vic’s Sam, but had a lot of fun with Blogging Mone’s suggestion of Arrrrgh, which she decided would probably frighten a child (it would do the way R said it).

And we all had a great laugh having been reminded of the legendary Captain Pugwash. Plundering Porpoises! Thanks to everyone who left comments.

Good Choice! I am happy you didn't take my suggestion serious!!

You do realise that when it is questioned at a later date what the Pirate's name is he/she will say 'Pirate'.

It's not that children lack imagination, it's more to do with them being so literal.

hat is funny is the withering look they give you when you've asked the toys name as if you are a simpleton for knowing what the object was.

I can now tell you, that my mother only agreed to Kettle, when she found that I was mightily attracted to a suggestion by one of my uncles, viz. Diarrhoea. She didn't speak to him for ages.

Anonymous said...
This comment has been removed by a blog administrator.
8:44 AM