A star is born!

Tinker has arrived!!! His name is Alexander James Taylor. He weighed eight pounds and a penny, was born underwater at home at 10:33am this morning. At last.

They were quite keen to induce Rosie today, but labour started yesterday and got going with a vengeance in the early hours of this morning. She took warm baths, drank raspberry leaf and used the TENS machine. Then she sat in the birthing-pool and inhaled vast quantities of gas and air. As a result, it sounds like it really wasn’t too bad as these things go and the midwife stated that she ought to write a book about this birth on account of how very smoothly, and according to Rosie’s meticulous plans, it all went. 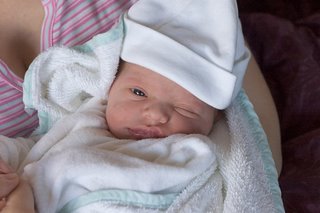 Alexander’s first word as he came up through the water was blobolob -olob - only a second old and already a fan of his favourite auntie’s blog. As you can see he has very deep blue eyes – although some babies do have blue eyes which change colour within a few days, so we’ll have to see. And although it is rather early to tell, it does look as if this child is, in fact, ginger.

Initially his entire face was a little blue as his umbilical cord was wrapped around his neck, but this was dealt with so quickly that Rosie and Adrian only fully registered this after they read the notes later on. Rosie’s has had very little trouble feeding him. Adrian was heroic throughout, managing to wash the car whilst caring for R –pouring the cooling water from the birth pool out of their front window onto the Mini. Adrian is simply beaming and has done an absolutely excellent job of looking after my sister and nephew. 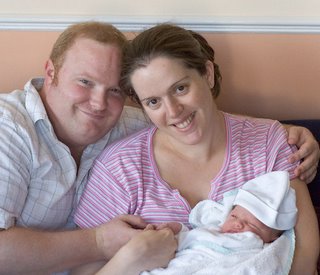 This is Granny Kelly’s first great grandchild, so she was ecstatic. She is generally in great shape and is off on a hot air balloon ride tomorrow.

Mum had a big cry and then started leaping about, dancing and singing a song which was a combination of various of James Brown’s hits. Dad was kind of quiet about it but I think he is also very happy.

Alexander shares his birthday with Katharine McCormick, Joseph Hegel and Lady Antonia Fraser. He is born on the 110th anniversary of the shortest war in history; the Anglo-Zanzibar War that raged from 9:02am to 9:40am on this day in 1896. So there you go.
Posted by The Goldfish at 10:24 PM

Congratulations Rosie and Goldfish! Oh, and the new dad too.

Congrats Auntie (and the family as well.

Aww - he's soo cute! Poor R+A must have had a *slightly* disturbed night, I guess.

Many congratulations to the whole family.
Welcome to the world,beautiful little A.J. !

Congarts, Somone let the beetle out at last.

You have to be very old to remember Alexander Beetle!

Wonderful, congratulations Auntie Goldfish and everyone, and thank you for sharing your joy and pictures ... welcome little blue eyed one.

Thanks everyone! We hope to go and meet Alexander next weekend. :-)

What a little cherub. He seems to be winking at us, wondering what all the fuss is about. Congratulations to all, Aunty Goldfish and thank you for popping by.
B.

Congratulations! Glad everything went so well.

Great news!!! Little Alexander is soooo cute. Congratulations to everyone. How does it feel to be auntie Goldfish?

Awww! Congrats! I wanted to have water births but couldn't stand being wet for so long! All the best.