The Two Concepts of Liberty

I figure I can get away with a series of serious and abstract posts this week as it is almost bound to be interrupted by the birth of my niece or nephew, cute baby photos and accompanying slush. Today is the due date, but no news yet. Is he a she? Is she a he? My brother-in-law says he is still hoping for a puppy...

For a while now I have been wanting to write about what the word 'liberal' means to me. This is partly because I find this word massively misused just now; in American English it seems to mean something quite different and thus British English speakers seem to have got rather muddled. But I also wanted to discuss the way that my liberalism interacts with my egalitarian beliefs and strategies. Spotted Elephant has been in despair at the lack of dialogue between her own Radical Feminism and more liberal or ‘sex-positive’ feminism so I want to get onto that too.

Today I am going to start with this matter of what it means to be a liberal. To me, liberalism is concerned with the maximisation of negative liberty. The concept of positive and negative liberty was touched on by James Medhurst recently, but I’ll start afresh in my own words, because this is a completely different subject.

A hero I have mentioned before, the great Isaiah Berlin, wrote an essay called Two Concepts of Liberty (available in the book Four Essays on Liberty). He proposed that freedom (as experienced by citizens under a governing body) could be described as either positive and negative; I am my own master or I am slave to no man, as Izzy put it.

Positive freedom is freedom to do stuff. These are the freedoms which a government provides and protects for its citizens. So for example, the state insists upon its young citizens receiving a free education; an education provides all sorts of knowledge and opportunities which we would not otherwise enjoy. To have positive freedom is to be one's own master.

This differentiation is not terribly easy to understand. However, the next point I am going to make is that often negative and positive freedoms are competing interests and one must be sacrificed for the other. Hopefully by explaining this, it will begin to make more sense.

Imagine that as of today, it was no longer illegal to carry about weapons and firearms of any kind. You would be horrified! Why? – in terms of negative freedom, you would be more free; currently, in the UK, you are not allowed to carry a knife over certain proportions without inviting interference from the authorities.

Effective Law and Order provide us with a great deal of positive freedom; the freedom to go about our daily lives in relative safety, not to be afraid all the time, and not having to make special provisions to keep ourselves and our loved-ones safe.

As with so much in society and politics, this balance must be negotiated and reviewed ad infinitum. However, as I say, as a liberal I want each of us to have as much negative freedom as we can possibly be afforded. And it is entirely natural that authorities will generally attempt to take as much as we allow them. That is not just a throwaway all power corrupts remark; if you’re in charge of something, you naturally want as much information and co-operation as you can possibly acquire. There is always a danger this goes too far – a danger we have to live with, but a danger we be ever vigilant for.

Isaiah Berlin was very concerned about the threat of totalitarianism and discussed the ways in which authoritarian or totalitarian regimes use positive freedom to sell themselves. Hitler talked a great deal about the freedom of the German people – the positive freedoms of economic prosperity, national pride etc at the cost of… well, at the cost we all know too much about. During the Cold War, there were all sorts of draconian moves to control the speech and behaviour of ordinary people on both sides, and on both sides this was done in the name of freedom. I’m sure I don’t need to draw attention to the way that the word “freedom” has been banded about in recent conflicts...

And here, now… As I have said above, the freedom to go about our daily business and not feel in danger is a very precious one. And currently this is under threat from pseudo-Islamic terrorists, who may strike at any time and have no compunction about taking their own lives and the lives of tens, hundreds or even thousands of people. But then our government start locking away people without charge... this could be said to be a very dangerous time for both positive and negative freedom, and the challenge will be to find a way of maximising both.

Hands up who made it down this far? Promise, this time the next bit is almost guaranteed to be more exciting than this was. Look, here is a picture of a kitten as a reward for your efforts. 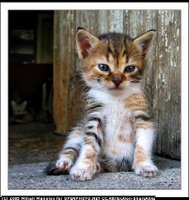 photo © Mihail Manolov for openphoto.net CC:Attribution-ShareAlike
Posted by The Goldfish at 10:47 AM

I still with ya! I usually think of it all in terms of freedom vs security. My desire to have freedom to carry weapons is in conflict with a community desire to feel secure.

Thanks Sage. That is one way of looking at it, yes. Positive freedom isn't always to do with security but that's usually the context in which it is discussed.

You had me until the kitten bit.

Actually, despite my throwaway line, I do come to comment with a purpose.

I enjoyed your albeit short essay on positive liberty, and why you are a liberal.

Last year, I composed a rather heftier blogpost called "Why People Are Conservative", which I thought you and your readers might enjoy.

It is more an exploration as to why people are how they are, politically, than any personal anecdote.

(Note: I am British, too, but I live in America now)

I really enjoyed reading your post too - thanks for linking to it. However, I do think we're talking about slightly different definitions of "liberalism". In the States, as I understand it, to be liberal is to have these certain ideas of freedom but also be left-wing. To me, there is no relationship between how I feel about issues of freedom and how I feel about other aspects of politics. Under my definition, it would be entirely possible to be a right-wing liberal or a left-wing authoritarian.

Hmm... I'm going to do some more posts about this, I shall perhaps try to cover this issue in more detail.

However, I do think we're talking about slightly different definitions of "liberalism". In the States, as I understand it, to be liberal is to have these certain ideas of freedom but also be left-wing.

It's mostly a political definition here in the US though, despite your point being on-target completely.

However, my blog readership are almost all Americans, so I have to speak in terms they use, rather than our more precise usage of "Liberal".

I am conservative (small and large C), but I am also a classic liberal, but many Americans call themselves this term, too, since the Clinton years.

To me, there is no relationship between how I feel about issues of freedom and how I feel about other aspects of politics. Under my definition, it would be entirely possible to be a right-wing liberal or a left-wing authoritarian.

The upshot of my post is that Conservatism in its political incarnation is the default political state of man.

But I've nattered on enough about that.

I look forward to your further thoughts soon. :)

I've been mulling over this recently too so it's good to read someone else on the same issue, particularly when it's far more organised than my own mental meandering. I will return and follow some of the links at some point when my brain is functioning a little more clearly.

I mean, great post. This is a good basic overview to keep in mind while slogging through the various posts on liberal vs. radical feminism and sex work.

I cant believe that you walk out of you homes with a weapon. The fear that you have of being robbed cannot be healthy. I am so happy to be in a positive liberal country, you are not judged, it is a closer community. Negative liberalism seems to be each man for himself, you cannot function as a whole if you only consider yourself.