Tinker has obviously inherited the family’s sense of punctuality, anyway. The world remains in suspense, but I'm taking a break from the heavy stuff anyhoo to do some shopping.

First off, our friends who run the soap shop in Whitby are now on-line. Honeyz sell handmade soaps, bath-bombs, massage bars, 'soap cakes' (like this one on the left) and so on. It's all suitable for vegetarians, none tested on animals and so on. It all sounds absolutaely delicious with Patchouli and Lime bathbombs and Cinnamon and Orange soap.

Yes, this is an unashamed plug, but as well as orders, they would be very interested in feedback about how it is all looking.

I had been meaning to make a puppet to help me communicate with my niece or nephew when he or she finally emerges into the world. However, since the birth is imminent, I decided I must buy one instead.

I love glove puppets. And my very limited childcare experience suggests that children are captivated by them – just sew two buttons on an old sock and make it speak with a lisp (because, you know, snakes lisp). We’re sorting a webcam out so that I can speak to Tinker through Skype and I figure that, not having the kind of face which is naturally entertaining to small children, I may need a puppet sidekick to keep those conversations going.

The best puppet shop I found on-line, and the one I finally bought from was Puppets By Post. You can get almost any animal you could think of in puppet form. They even have seagull puppets and the bizarre biblical camel (which is wearing sunglasses, as all the camels did in the Bible). They have a troll puppet which comes with a hedgehog finger puppet, so one could recreate the sinister dialogue that might take place between these two. They also have a range of what they describe as signing puppets although I don't know whether that means what it sounds like. 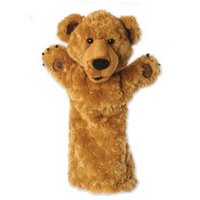 After much deliberation I bought a rather plain but cute bear puppet. It cost £8.50, is supposed to cover your entire lower arm and has a working mouth, which I thought was important. It is sweet, isn't it? But not too silly. It doesn't have a name yet, if anyone has any ideas. 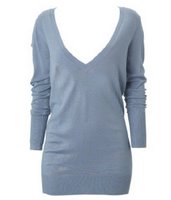 And whilst on the subject of shopping and stuff, when I was really bored and looking at jumpers at Dorothy Perkins, I noticed that some of the jumpers were described as boyfriend jumpers. What the heck is a boyfriend jumper?

Is it supposed to attract a boyfriend? Replace a boyfriend? Resemble a boyfriend? Although they are all quite long jumpers, they do vary rather in shape and colour. I quite like this shape jumper but they have such dull colours. Apparently this autumn's colours will be red, grey and black and white. Well there's a surprise...
Posted by The Goldfish at 2:25 PM

Probably it means they look like they've been pinched from the boyfriend. Every so often this seems to be a fashionable look; I remember a time when I practically had to put a padlock on my shirts.

If I had a boyfriend who had a jumper like that i'd....um...have a boyfriend.

I think i'd rather wear the puppet.

Lady Bracknell is slightly unnerved by the fact that both she and the Goldfish have blogged about puppets on the same day...

Charles, I hope you mean you had to padlock your wardrobe where you shirts were located, rather than the shirts themselves. I have been known to buy mens clothes for myself, as I would never be allowed to borrow AJ's even if I wanted. Similarly, he's only allowed to borrow my clothes in really exceptional circumstances.

Cheerful One, maybe we could start a new fashion? We'd have to take off the puppet for certain tasks, of course, but folks have those tiny little hand-bags which you have to hold in your hand all the time and manage okay.

It could also be quite useful. Like if some young man suggests that you are Rubenesque, your puppet could tell such a person to sling their hook in the strongest terms while you're sat apologising for your puppet's rudeness and thanking them for the compliment.

And like, when yoos on da street and someone is disrepecking yer, you could say, "Talk to da puppet," instead of "Talk to da hand."

Your Ladyship, as my grandfather would say, you and I must be physic. Only I have an entirely rational explanation as to what I was doing looking for puppets. One does wonder why her Ladyship might have been about, perusing the wares of a toy shop...

I have recently seen that exact puppet and those ones that cover your whole arm are really great. My daughter liked the puppet you got to entertain your niece/nephew :) I think it's so cool that you are making plans to meet him/her!!

I think they are called 'boyfriend jumpers' because you keep them to for yourself, which is good for your boyfriend as he does not have to go out into the world wearing the returned jumper with boob bumps on the front, declaring to the said world how bumptious his girlfriend's boobs are.

The puppets are called "signing puppets" because they have fully sized hands. You can put yours into them as if wearing gloves and then let the puppet talk sign language. I have one, too. She is called Emma. I will dedicate a post to her, so you can see her signing on my blog in about a few days time. Deaf children are just crazy about them!

Z Hello and thank you.

Sally I very much like the concept of bumptiousness or perhaps bumptiosity, being rather bumptious myself.

Bloggingmone, I did suspect that but couldn't work out how a puppet could sign, but that makes perfect sense now. And yes, I can imagine the children love them; it's really a great idea.

I LOVE that teddybear puppet.

And I think Charles is right about the "borrowed from boyfriend" look. I love borrowing my boyfriend's clothes. Only after he's worn them for a bit though, so that they smell of cuddles. You may go and throw up now.

Sadly I am not bumptious.