The Sunset and The Bonkers Goldfish 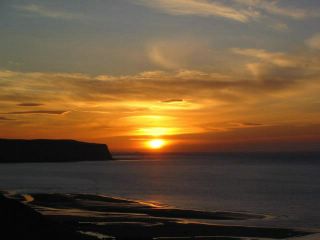 This picture is actually one that my friend Pete took. He was able to walk across the road to the edge of the cliff – all my photographs had lampposts in them which detracted from the view despite my best efforts to arrange them artfully.

Much happier at this end of the week. Trying to do some recording of my compositions today - trying being the operative word. I’m beginning to think that I’m just not that good a guitar player to play a four minute tune accurately, even if it is a tune I wrote.

My books moving on. It is very frustrating, this sense of being so near – beyond the point of no return – yet knowing there’s still a lot to do and notknowing just how much I have got to do, how much editing it’ll take, any major changes between here and the completed manuscript.

This stage in the writing process is like a sort of psychosis; you have all these characters in your head who you know intimately - better than you know most of your friends and family. You kind of created them, but you feel like they must have always existed elsewhere and only moved into your head when you invited them in. They’ve highjacked a fairly simple creative idea you had and keep replaying it in your head like a vivid dream – not a film because that’s purely visual and only lasts a couple of hours – but a fully sensual dream which seems to span a period of about a month, which is the timeframe for events in the novel.

I know the story extremely well, but it remains ever so slightly dreamlike. Even the most vivid and orderly of dreams have slight inconsistencies, bendy bits, clues that what you are experiencing isn’t quite real. Sometimes I read over what I’ve written and realise that time has passed too quickly or slowly, somebody has obtained an item which should have been elsewhere, someone has expressed a knowledge of something which they are yet to learn. Also these characters, who have become an almost demonic presence in my life, keep adjusting it like prima-donna actors interrupting the rehearsal to suggest “What if I come in through the other door and use this line instead of the crappy one you wrote?” The bastards.

The only thing I can do to exorcise them is to get it all written down and share it with someone else. But I have to get it perfect; I really have to get it right so that someone else can fully understand exactly what happened. I don’t believe that I’ll get these people off my back otherwise. I decided to give up and work on something else this time last year but they continued to haunt me all summer.

The novel’s principle antagonist is the worst because he’s so damn narcissistic. Sometimes when I am doing other things, thinking about other things, like when I’m blogging or browsing eBay or whatever, I’ll hear his voice saying, “What the fuck are you doing, Deborah? You’re supposed to be writing a book about me.”. He always speaks quite quietly but pronounces the word ‘fuck’ with great emphasis, like he uses half the breath he took for the entire sentence on it. Conversely, when I am writing lots – especially about him - he’ll say really gentle complimentary things, even tells me to take it easy and not be so hard on myself. I don’t really trust this. Frankly, the guy scares me. I want him out of my head.

I have had to abandon plenty of other projects because of my health or timing or because I realise I’ve made a mistake but I don’t think I’ve got a chance with this. I have to get it done or else in ten or fifteen years time they’ll still be bothering me.

Goodness, that feels a great relief to have off my chest, but you can kind of understand why this is not something I can easily share...
Posted by The Goldfish at 7:25 PM

I can understand that this isn't easy for you to share, but I think that it is good that you have. I say this as I have often wondered what drives people when they are taking on the often lonesome task of writing a book, be it novel or biography or prose.

I understand that this must be distressing to you at times, but also see it as your inner strength and drive pushing you.,,maybe too hard at times, on.

I do worry that you willpush yourself too far, so please keep sharing so I know you are ok.

I have pnd and mine manifests in an inner part of me 'sowing' anxieties which literally fill my head like a computer virus fills a hard drive, so I *think* I relate a little to the persistance of such drive.

sorry if i have missed the point totally, I feel a bit hazy tonight, had to take some codiene as well as other meds :(