The Horn of my Salvation

I have no idea why I felt inclined to write about this, but I did.

My sister Rosie played recorder when she was at primary school. The recorder has a bad name; one most often hears it played by small children who can only play three notes and that’s very slowly, but it is a truly gorgeous sound when played competently. Then at the beginning of high school, Rosie took up the French Horn.

The French Horn is an excellent instrument to encourage a child to play. For one thing, it doesn’t make horrible noises when one is first trying to get a noise out of it – it is not easy, but the worst you can produce is make a huffy-puffy wheezing noise or a loud low fart; you can’t attract stray cats to your window sill like you can when learning a violin or clarinet. But best of all it boasts the advantages of being a rather unpopular musical instrument (especially among girls) and often having relatively simple parts in orchestral pieces. This means that a much lower level of skill is required to get into an orchestra and to begin playing proper music with other people than you need with your strings and woodwind. This in turn is a very effective and fulfilling form of practice and improves the playing pretty quickly.

Unfortunately, it is rather unromantic. Even when a person gets good at it, they are still too often shoved at the back of the stage playing rather simple baselines. And then there is the issue of the spit valve. The instrument is a cold brass tube and is played by effectively blowing tight-lipped raspberries into it. Inevitably, there is condensation.

It was on BBC Radio Suffolk one Christmas Eve that a brass band Rosie was in was playing Christmas Carols. During a break, the presenter interviews some of the band. “So what’s your name?”

“Rosemary,” she says in her soft little voice.

“And what is it that I saw you doing just now?”

“I was just emptying all my spit out onto the floor.”

Rosie took her horn all around Europe with various youth orchestras and bands; Spain, Hungary, Germany, the Czech Republic and Saltzburg, Austria, birthplace of her idol. Rosemary actually had a little portrait of Mozart stuck to the inside of her pencil tin. It was really quite unhealthy.

I was dragged, by my hair, to many concerts as a teenager and not every one was an unrivalled pleasure. I have actually attempted to count the bricks in the walls of several music venues across East Anglia. And it didn’t even seem to be for Rosie’s benefit since I could rarely see her or make out which notes she was playing.

But then there was going to be a big school concert at the Ipswich Corn Exchange (we were a strange school; we had a proper purpose built theatre, but we were always holding concerts elsewhere, at Snape Maltings or the Corn Exchange). It was Rosie’s last year at school and they were going to play Mozart’s Horn Concerto #4 in E Flat Major. This is the one you think of if you can only think of one Horn Concerto. The third movement is a very famous Rondo to which you can sing these lyrics, should you be so inclined.

Mum and I came with Rosie to find a frock for her big solo. We went in all these incredibly posh dress shops, the sort where you get served coffee while you’re waiting for someone to try stuff on. But it was hopeless; there were short dresses which were inappropriate, long dresses that just looked wrong on an eighteen-year-old and most of them were black, which isn’t really the thing for a soloist. We gave up and on the way home we popped into a charity shop, where hanging by the door was the most ridiculous flouncey red dress one could ever envisage.

This dress was a little extreme. It had presumably been a bridesmaid dress circa 1987, but it was scarlet, the colour of pillar-boxes. And it was very… full. It had big puffy sleeves, a big flounce around the shoulders and a big silly skirt. Really honestly, this was not a dress that ought to have looked all right on anyone in any circumstances.

And yet there we are a few days later in the Ipswich Corn Exchange, up strikes the orchestra and out she comes in a blaze of bright red and brass. And she looked incredible. And she sounded incredible. And in all the many and tedious concerts I had attended, I had never seen a soloist looking so much at ease or playing so perfectly. And in all the many and tedious works of Mozart I had been subject to, none of them had ever sustained my attention for twenty minutes before. 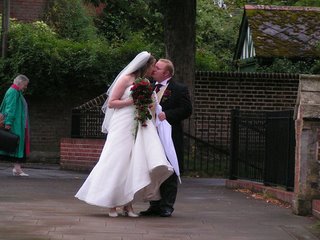 The RSI meant that Rosie had to use her voice as the main instrument with which to complete the practical part of her degree, and it was through her incessant warbling that she met choirmaster and organist extraordinaire, Adrian. With her horn and his remarkable organ, it was only a matter of time before they got together and produced the musical sensation that is Alexander. And they all lived happily after, with the horn making an occasional return whenever a local orchestra decides to perform The Planets (which you need several horns for, apparently).
Posted by The Goldfish at 7:08 PM

Why is the French horn a divine instrument?

Because a man blows in it, but only God knows what comes out of it.

I believe the song is by Flanders & Swann of immortal memory.

what a lovely piece, goldfish.

i love to hear stories of mistakes or events that were in some ways quite hard for someone, but that then lead to something wonderful.

my grandma, for example, tells of how when she was taking her college entrance exams, she skipped two whole pages of a section because they stuck together and she didn't notice. so she didn't do as well on the exam as she wanted, and as a result didn't get into the school she preferred (a well-known women's college in the u.s.). had she gone to this ritzy school, she would never have met my grandfather and the whole family wouldn't exist.