As keen observers will be remember from last year, today is the birthday of my Mum, Margaret Thatcher, Paul Simon, Nana Mouskouri and my brother-in-law's father, Keith. I hope you all remembered to send a card to each of them.

Some of you may know my mother, not as Mum, but as Superbat. And you may be wandering how it was that my mother, a humble school secretary from rural Suffolk, became this legendary figure throughout the world? 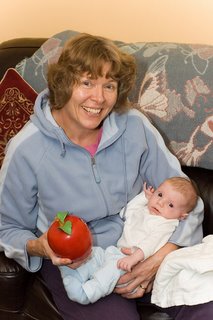 Well, when Alexander was born, there was the issue of what the grandparents would be referred to. The paternal grandparents embraced Grumpy and Grumps in ironic referrence to their cheerful dipositions. My Dad insisted that he wanted to be called Sir and the less said about that the better.

Mum would naturally have become Granny Kelly, only there already is Granny Kelly who is known as such far and wide. So she was struggling somewhat with how she wanted to be referred to.

At primary school, several of our schoolmates referred to Mum as Supergran. Readers of a certain age may remember a television programme of that title. Readers of a similar age may recognise the Happy Apple in the photo on ther right. So why Supergran?

One evening, my eight-year-old sister confessed to Mum that she had arranged to have a scrap with some boys in the playground after school the next day. The circumstances under which this dishonourable arrangement had been made have been lost in the mists of time. In any case, Rosemary had lost her nerve rather, but didn't want Mum's intervention.

Mum intervened. I can't be sure of exactly what happened as my six-year-old self was waiting at the other end of the school, wondering where both my sister and mother had got to. But this is the way it was described to me.

The playground cleared after school, leaving Rosemary and these four boys who she was going to fight. My mother had positioned herself and her trusty bicycle behind the wall. The moment the stand-off descended into a scuffle, Mum leapt on her bike, rode into the playground, leapt off her bike and took hold of the collars of not one, but all four boys at once. She then dragged their wriggling bodies into the school building to present them and this sorry tale to the headmaster, a mortified Rosemary following close behind.

Word soon got around and thus, being short of popular female role-models at the time, my thirty-something-year-old Mum became known as Supergran to the children at school. And when Alexander was born, she declared that she did not want to be known as Granny, but as Supergran.

I was talking about this on the phone to Rosie, when the voice of a certain young man who happens to be brother-in-law chirps up in the background, "Superbat, more like." 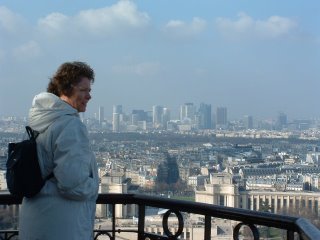 Being an incorrigible snitch, I was compelled to inform Mum of this slander. And she said, "Yes! That's much better. Henceforth, I shall be known as Superbat!" and she began practising heroic catchphrases such as

"Watch it! I'm the grandmother,"

"I can be a mean mother's-mother when crossed," and

"I was changing nappies when you were still wearing nappies, punk."
Posted by The Goldfish at 9:04 AM

Happy Birthday to your mum. I am so sorry, I did not send a card....
My two grandmas were living in the same small town as we did and we refered to them with the names of the streets they used to live in. So one was Granny Münsterweg and the other one ws Granny Annastrasse. Granny Münsterweg's house was was very old and my parents replaced it with a new one, with granny living upstairs in a little flat. Her name therefore changed to Oma oben (granny upstairs). Even though the system is very practical I have never seen it in any other familiy.

Oh, I just noticed that the squiggly little symbols in your posts are gone. It used to be full of §%&/ whenever there was a ' in the text, but now everything is perfectly readable. Even strange German letters such as ä, ö, ü and ß are not replaced by other symbols. You've done a great job!

As long as everyone's happy... and my god, Alexander looks too too too adorable in that picture.

Your mother sounds like fun. I love the idea of a Grandmother with Attitude.

Next thing, she'll be applying to join the local chapter of Hell's Grannies (Monty Python).

Please give her my best wishes.