I am rather pleased of my picture of Grandad Kelly. I had to abandon my first attempt entirely and briefly worried that, because he has been dead for five years and I have no large or digital photographs, I may have forgotten what he looked like. As it is, this is what he looked like. Roughly 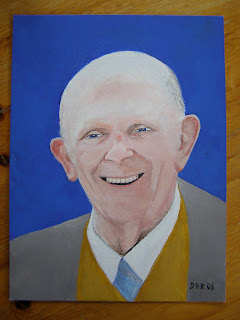 I had and still have a bit of a dilemma about this painting. Grandad has something which I understand to have been a type of skin cancer which had to be regularly treated but never caused any harm besides a permanent red make. on the bridge of his nose. I wasn't sure whether to pretend it wasn't there. In the end I decided to put it in, and to be honest it does look somewhat less prominent on the actual picture than it does on the screen - at least on my screen.

But what do you think? I had a similar issue with the mole of my friend Vic who I'm painting, but I spoke to Vic about it and we decided it was best left in. Grandad's cancer or ulcer or whatever you call it is another issue; it's not nearly so becoming as Vic's mole, but it was part of what he looked like. Does it stand out a mile? Does it look like an accident?

It is an emotional business painting dead people. I also wonder what my Granny Kelly will make of the picture when she sees it. They had an excellent marriage for just short of sixty years; in the original photo I used to paint him, he had his arm around her.

Unfortunately, my pain has crept up a lot in the last few weeks and I have been temporarily banned from sitting the chair that I use for painting. I'm not sure that'll make any difference but the pain is beginning to become a real problem again and I'm prepared to try a few things before resorting to harder drugs.
Posted by The Goldfish at 11:41 AM

The most prominent thing in this picture to me is what I interpret as your Grandad's merry spirit. The nose thing? It's just part of what he looked like, I assumed on first glance, just part of his overall physical presentation.

When I take portraits (b&w photography), I use natural light and never allow my subjects to wear cosmetics they don't wear every day. The point of a portrait for me, and for them if they choose me to take theirs, is to capture the person as s/he really is in this moment. All the marks. All the lines. Between all that, there is the spirit, and I like to see what parts of each create what parts of each. Character leaves marks. Marks create character. You know? In all of that there is the person, and that's what you are here to portray.

He looks like a nice man with a merry spirit and a compassionate heart. Was he? If so, you nailed him (and of course I mean that in the nicest possible sense).

Personally I think you did the right thing, but more generally I guess it depends how the person themselves would have felt. If someone has an imperfection which they are terribly sensitive about, minimising it's prominence might be tactful. But assuming your Grandad didn't have an insecurity complex about the mark, I think it's miles nicer to have a portrait which captures him how he was :)

If it was a temporary mark that just happened to be on his face at the time of the photograph - like a zit or a scratch or a smudge of ink - then I'd have edited it out.

But things that are a bit more permanent, like moles or scars or wonky teeth - they need to be left in, otherwise you would fine yourself looking at the 'sanitised' version and finding it very, very creepy, because you'd recognise the person but there'd be something Not Quite Right.

It's a lovely painting. I agree with the others that capturing someone with the marks that life leaves is a truer portrait. The mark doesn't look like a "mistake" on the painting and doesn't overwhelm his face.

Sorry to hear that you're in more pain right now. I hope you're able to modify things in your life enough to make a significant dent in it.

Pain isn't much better, but I'm coping with it better now I have a plan of action.

That's a lovely picture, and I can imagine how it would be hard to do - just looking through a packet of photos of past days makes me sad.