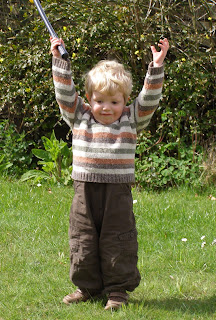 Come on, it has been a while since you've seen any gratuitous materteral blogging on here.

Yesterday, I got to see Alexander! I wasn't sure I was going to, on account of the fact that my sister's family all had rotten colds last weekend and frankly, if I hadn't got my pain sorted out, it would have been very difficult. I can't really be trusted to supervise Alex because I have no means of chasing after him; if I was really going to babysit, I'd need a giant net on a very long pole. However, at least with less pain I could pick him up if I needed to and I did manage to push him on the swing, from a sitting position on the grass (this is still a precarious practice, but I reckon the sustained giggling of a small child is worth the risk of being kicked in the head).

Another slice of luck was that the weather was so nice. I think it was warmer yesterday that it had been last August when we were in my folks' garden for his birthday party. Which is especially odd given the weather at this time last month. 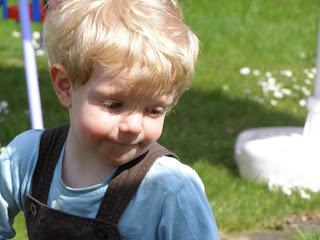 Alex still doesn't say much but he has learnt to count! Up to three at least. Mum was playing a game where she was saying "One, two three, hooray!" and Alex imitated her by say "Do, do, do, yeah!" several times over and he never one uttered more or less than three dos . Does that count as counting? I reckon so.

Alexander devised an excellent variation on the game of golf, whereby merely hitting the ball with a club (both lightweight plastic) merits a cheer. This is much more exciting and uses considerably less space than the other version. 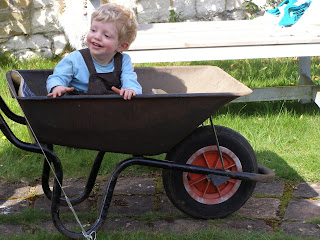 He also participated in the ancient East Anglian tradition of pushing small children about in a wheelbarrow. This originates from the time that women used to give birth out in the fields and wheel their children home sat amongst the turnips. This resulted in many turnips being mistakenly brought up as human children, with one turnip making it so far as becoming Archbishop of Canterbury in 1093. Sorry, but if I don't plump up this paragraph there will be a big gap at the end of my text.

So anyway, it was a very nice day. Alexander is a very bright and happy child who finds amusement in almost everything. Meanwhile, the more disconcerting side-effects to my new pills are already diminishing.
Posted by The Goldfish at 11:09 AM

Email ThisBlogThis!Share to TwitterShare to FacebookShare to Pinterest
Labels: Cooing, General Nonsense, Getting Out, Luck

What a cutie. Surely the best use for a wheelbarrow.

aww so cute. What great pictures.