Splashes to splashes, dust to dust 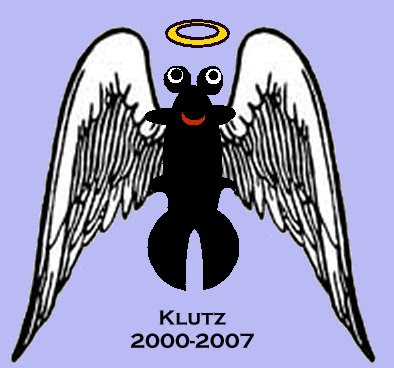 Klutz the fish made her final journey to the surface of my Dad's pond yesterday. She survived travelling 250 miles in a dustbin - including the coldest night of the year spent in a carpark somewhere off the A1. Then there was the flood and having to stay several days in the dustbin whilst it was established that we wouldn't be able to set the tank up soon enough. Then she survived being transferred into a pond outside with other, far hardier goldfish.

So she did pretty well but the stress of all this probably got the better of her; she acquired some sort of fungus and despite our best efforts (and eighteen quid spent on anti-fungal stuff), she died.

Which is a shame. And more worrying, both Schmuck and their kid Lucky have symptoms. So we're setting up a Fish Intensive Therapy Unit to try to keep them going; I really would be upset if we lost all three of them.

Klutz will be fondly remembered. Being a fish, she didn't have much personality. She would swim about a bit, eat stuff and lay eggs. She was much like every other fish you are likely to come across. But she was our fish. And now there's only Schmuck left out of the four we started with. You may recall the way that Gimboid left this world.

But apart from that, everything is okay. On the nature front, we saw two swallows, which don't make a summer, but were still nice to see. And I think my head may be ever so slightly clearer today.
Posted by The Goldfish at 11:48 AM

Sincere condolences from someone who has also loved and lost many fish. And the small, wild avian tragedies, accidents of our coexistence -- oh, they are bad, too. You have my sympathies all around.

Sorry to hear this. That is the downside of the pleasure we take in wildlife and pet animals. Cf CS Lewis: it's part of the deal. Hope your other fish make it.

IIRC, garden pond writer Helen Nash says to not name the fishes, because the fishes you name are the ones that die.

We started out with four golfsih, which were referred to generically as Alpha, Beta, Gamma and Delta. There weren't technically named because we couldn't tell them apart!

Of the quartet, only one has survived, along with at least a couple generations' worth (+/- 19) of offspring anonymously related to the quartet.

It's always reassuring to watch these near-wild outdoor pond goldfishes showing up again after winter.