Recently, there has been much debate about how to control nastiness in the blogosphere. Anna suggests that doing away with anonymous comments would solve much of the problem (something Charles Dawson wrote about some time ago). In a way, I agree with her; there’s not much excuse not to devise some screen-name. But most of the anonymous comments I have received have been very nice, some deeply moving and I have occassionally used the facility myself when contributing to discussions of a very intimate nature.

Mike at Troubled Diva weighs in on the responsibility of publishing systems like Blogger, who, as Mary discovered among others, really don't seem to take their responsibilities seriously when it comes to harassment and defamation. Mike also writes about the use of the word 'friend' when referring to everyone with whom you share links with on Myspace, Twitter, Last.fm etc. 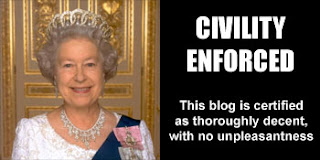 Meanwhile, the Unreliable Witness gets very shirty about the idea of a Blogger’s Code of Conduct, as proposed by Tim Reilly. When I first saw this suggested logo, with Her Majesty the Queen endorsing (or perhaps personally enforcing) civil conduct, I envisaged a uniquely British code of conduct, which could insist on the correct spelling of all sorts of words, as well as accurate grammar; fora, instead of forums, correct use of the concepts of inference and implication, I am nauseated as opposed to I feel nauseous etc., etc.. Fortunately, I decided this would amuse me and no-one else.

I have been very lucky in so far as this blog is rather obscure and unpopular (no, sorry, it is a refined taste, a blog to which only the most sophisticated reader is drawn), my commenters are all very lovely people and my writing style tends to have a sophorific effect on trolls, imps, hobgoblins and others of the more malevolent creatures of t'interweb folklore.

Despite this, I have long thought about writing some sort of Commenting Policy, just for the record, in case anyone challenges the decisions I make. One of the best examples I have seen is Andrea's House Rules and House Rules Redux. Unfortunately, I'm sure that those folks determined to leave unpleasant comments wouldn't actually click on such a link, let alone read it. In fact, all the unwelcome comments I have ever received haved been from folks who clearly haven't read a single word of content. Often they are placed merely to draw others across to another website. My favourite of these was (from a personal blogger, not a spambot);

I don’t know whether I like this site or not. Try to be more Christian!

Another commented on the length of my penis (again, a real blogger), which offended me even though the assertion was quite accurate - alas, I really am lacking in that department. However, such things are easily deleted and those sorts of people never come back.

However, none of the baddies in all this - those types I assume to be adolescent boys who find themselves with a box they can type in and just have to write something, or indeed those folks who, for whatever reason, are set on persistent harrassment and abuse - are going to pay the slightest bit of notice to guidelines, whether these are guidelines I devised myself, or guidelines we devised as a community.

The only real cure is increased consciousness and enforcement of the law. You're never going to stop people being arseholes. People can be arseholes wherever you go, they just are sometimes, and you can only feel sorry for them and shuffle away. However, in all the cases where on-line nastiness has moved from annoying to disturbing, the law is being broken.

The law and the Internet don't always mix too well because of the local nature of the former and the international nature of the latter. What's more, there are some brave bloggers who are breaking the draconian laws of their own countries in order to blog, in order to speak up about human rights abuses, political corruption and the suppression of free speech.

However, as I understand it, blogging clients such as Blogger, Wordpress and so on do have a legal responsibility that their software and crucially, their server space, is not used for criminal purposes in the country where those servers are held, which I guess would be the United States. Nobody should be able to use those machines to incite hatred, arrange criminal activity or harass individuals. They wouldn't allow us to post child pornography, would they? So why let anyone break the law with words?

Edit: Someone mentioned the other day about a glitch in Blogger causing their posts to be "Don't allow comments" by default. Typically, this hadn't happen to me until I posted this one...
Posted by The Goldfish at 2:52 PM

"Member agrees not to transmit through the Service any unlawful, harassing, libelous, abusive, threatening, or harmful material of any kind or nature. Member further agrees not to transmit any material that encourages conduct that could constitute a criminal offense, give rise to civil liability or otherwise violate any applicable local, state, national or international law or regulation. Attempts to gain unauthorized access to other computer systems are prohibited.

Pyra may, at its sole discretion, immediately terminate Service should Member's conduct fail to conform with these terms and conditions of the BTS."

In other words, they CAN shut down someone's account for being an arsehole. They just WON'T. Probably because it would be too much hassle, or because they've never been on the recieving end of it.

When my harassment was at its worst, I sent Blogger an email explaining all the ways in which (particular Blogger member) was violating their Terms of Service. I just kept getting back the automated response detailed by Troubled Diva.

The blogger (or one of them) posting about defaulting to Do Not Allow Comments was me.

You have to watch this version of Blogger. It doesn't do it every post, just waits until you have relaxed and stopped double-checking.

No, it doesn't stop the jerks from being jerks, sadly. But it does allow me to tear a strip off their backs, legitimately: "You can see you've violated my houserules, and as I clearly stated, persons who do so may be subject to mockery, ridicule, etc." I don't do it often, but when I want to, I don't want to feel guilty about doing it.

A nice "Hello. This is my living room. Don't pee on the carpet" can work wonders in that regard.

quite a co-incidence that you've posted this: only last night i was reading a blog written by one of the London 7/7 survivors, Rachael North, (http://rachelnorthlondon.blogspot.com/2007/04/felicity-jane-lowde-of-oxford-has-been.html), and her description of the harrassment she'd been subjected to by someone.. which eventually went to court. Worth a read, even if only for the jaw-hitting-the-table factor.

a friend of mine who posts a slightly more.. ahem.. adult blog (complete with photos) occasionally has real problems with negative comments.. she just deletes them. doesn't even respond to them these days - its by far and away the best way to deal with that variety of commenter.

I had to ban all comments because those spambots or just annoying penis stuff!
Terrible!

Nathasha
www.audacitymagazine.com
the disabled magazine for the able mind.

Yeesh - I just read that article that Kethry posted. I find that very, very disturbing.

Luckily, my own blog tends not to attract the sort of comments that need moderating, but this really is an issue. As I use my own software, which requires e-mail verification for the first comment, spambots aren't an issue either.

But these providers, like Blogger, really need to get their acts together. Just because a service may be free, it does not mean that the service provider has no responsibilities. Freedom of Speech is one thing, but Freedom of Abuse should be stamped on very heavily.

Thanks also for reminding me that it is a long time since I last listened to that album (Sweet Dreams) and that a playing is long-overdue.

Bloody hell...I just typed a comment and it dissapeared. Considering the comment topic...well..that's more than a little odd.

Anyways, what I'd said was hello, and your Queen logo made me spit out my tea laughing...and thatI've had friends get their Blogger accounts temporaarily halted until theycould prove they weren't spammers so maybe they're getting on it a bit (altho not very well it seems).
...and now this little "edit"...hmmm

Just wanted to pop in and say I like the way you think...