We met our new GP this morning, who couldn't have been lovelier. I was just a touch nervous, as I guess anyone with chronic illness is when meeting a new GP, hoping that they get it without too much explanation. But she got it. Indeed, the doctor was one of these rare people who you have to deal with, who it turns out to be a pleasure to deal with.

The only negative is that this particular local health authority refuse to pay for certain drugs which are available over the counter drugs. The cost in itself isn't a problem; it will cost me just over £1 a week to pay for my own paracetamol. The problem is that buying the stuff without prescription, you can only buy thirty-two tablets at a time. That's four days' worth, if I'm taking maximum dose.

This rule was put into place as a suicide prevention measure. Paracetamol overdose provides a very nasty and very slow death through liver failure, but being cheap and widely available, it has long been a popular choice for self-poisoning. Truthfully, you would pretty much guarantee liver damage and risk complete liver failure and death if you took all thirty-two tablets, but not as much as if you took a hundred, which is how many I used to get on prescription (which was okay, because the prescribing doctor can judge that I wouldn't take them all at once).

There is, of course, nothing to stop you stockpiling or from buying several lots of thirty-two tablets from several different shops in the same day. Indeed, someone suggested that the real reasoning for this restriction hinges on the restorative mood-lifting powers of exercise; a brisk walk between the two chemists might be enough to make someone change their mind...

Unfortunately, this poses a logistic difficulty for me, since I can only buy four days worth from a given shop on a given day. After some calculation, the only long-term option is to ask help from my folks. If both my parents and ourselves buy paracetamol at every opportunity, and then get them to smuggle the goods over the Suffolk/Norfolk border in the dead of night (safe passage signaled by a torch flashing Morse Code), I should just about have enough.

In other news (News? What news? You're rambling on about nothing, woman!), I tried to make my hair purple and it failed. It changed the colour of my hair, and it is a fairly interesting colour, but far more reddy-brown than purple. I shall maybe photograph it when I have good light. I guess that it is because, despite coming into contact with nothing more nourishing than water and bicarbonate of soda (really), my hair is in pretty good condition; it's just not porous enough to take in the colour. I shall have to think again, especially as following your encouragement, I am quite determined. 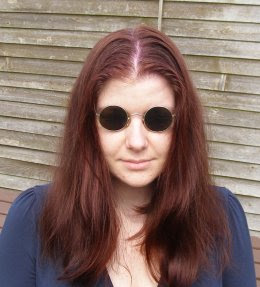 Edited, Friday Morning: Here is my hair, having been dyed purple from a start of somewhat orange. It is probably a touch more purply and interesting than it looks in the photo, but not much.

I feel rather ashamed of this appalling photograph which demonstrates my inability to achieve (attempt) a straight parting, as well as the fact I am having something of a bad face day and look like I may have been dead for a few days. Ho hum, I don't care if you don't, you wanted to see my hair colour...
Posted by The Goldfish at 9:12 PM

Is your hair dark? I thought you had kind of a dark blonde thing going on. It is my understanding that people with dark hair who wish to end up with true purple usually have to bleach their hair before applying the purple. Otherwise they just get kind of a rinse effect as you've described. And that can be very pretty, too, but not if you're looking for a whole head of true, vibrant purple.

Bleaching, of course, implies nasty chemicals and hair damage. Some people compromise by bleaching out just streaks and dying those. Personally, I think that results in absolutely the best purplehead look. In nature, no one's hair is all one solid color, after all, so insertion of purple highlights, especially if you do several streaks in different purples, can be superfabulous. And of course another way to do this is with little bits of fake purple hair -- what are those, extensions? appliances? I don't know the beauty shop lingo. But there are kiosks at our local shopping mall which sell them, and what you do is glue them to your scalp at various strategic locations so they look like they're growing out of your head.

I'm looking forward to seeing what you have, and then whatever else you do next. Maybe this was meant to be, since you were nervous. You can go gradually. :)

My hair is naturally mid-brown or perhaps light brown. It gets a whole lot lighter if I rinse it with camomile tea.

I quite like the idea of streaks, but am very reluctant to take peroxide to my head, partly because of the chemical bit, but partly because it can look seriously naff when growing out.

As for artificial bits... perhaps I'll investigate that possibility.

In any case I am quite determined to find a way!

I actually really like the photo! You like the lead singer in a punk or hard rock band.

s'okay, we all have bad face days.

Is it worth discussing with the doctor or the pharmacist if you can, perhaps, have not a prescription but a note, explaining that you are authorised to buy 100 tabs at a time?

That said, if it's just straightforward paracetamol with no added bells and whistles, you don't need an actual chemists. Thinking about the little row of local shops near here, there's the chemist, the post office, the off-licence, the One-Stop, and there's a petrol station round the corner. That's over 150 tabs in less than 500 yards.

Why, that's a fab colour! Not shocking purple, to be sure, but it's got very subtly pleasing plummy undertones. And you're not having a bad face day by any stretch. Them's nifty shades. :)

I came back to see if you'd posted a picture yet, and look! You have! (Sorry, but next on my agenda for today is redoing my boyfriend's taxes because his work screwed up his W2s, which I know means absolutely nothing to you, except that you are helping me procrastinate, and I thank you.) I think your hair looks very nice, actually, the color quite rich. And also, what Sage said -- with those sunglasses and the very pale skin, quite the little rocker. Go Goldfish!

Can I as one who has seen a fair number of paracetamol OD cases in his time, make a few comments?

Paracetamol (acetaminophen) often sold under the brand name Panadol in UK, is a mild painkiller available off-prescription. It's useful for some kinds of pain only, such as dysmenorrhoea, sinusitis and mild headache, after tooth extractions and the like; for a stronger effect it is usually mixed with other drugs such as codeine (co-codramol and co-dydramol BPC) or dextropropoxyphene (co-proxamol BPC).

It's of no use in arthritic-rheumatic complaints or severe spasmodic pain or for migraine headache.

Because it's always been available over the counter it is perceived as mild, harmless and sedating. It is not.

The reason the 32-tab limit was imposed was purely statistical. Whereas you have to take dozens of aspirin or hundreds of benzodiazepines in order to kill yourself, the fatal toxic dose for paracetamol is much much lower: 20-30 tabs for most people.

In fact people have suffered fatal effects from as few as six paracetamol 500mg taken at the one time.

That's an extreme idiosyncratic reaction but there is no way, currently, of foretelling it.

Paracetamol cannot be metabolised by the liver, which it damages by causing cell necrosis; the dose of the drug goes round and round in the circulation knocking off further cells each time it reaches the liver until the point of no return is reached and you die. There is no sedation, no loss of consciousness at all, and it is very very painful. And takes days until you go into a coma caused by encepalopathy, hypoglycemia, cerebral oedema, generalised haemorrhage....

In the early hours - up to 24 - after ingestion, an antidote, Parvolex (acetylcysteine) or methionine can be given which protect the liver but after that no antidote will help and you are talking liver transplant. You wish.

The real tragedy of deliberate paracetamol self-harm in my observation is that people who choose this method rarely mean death. They mean, help! they mean, oblivion for a while. Then, before Parvolex and liver transplants were developed, they had 3-4 days to discover that they really didn't want to die after all but were going to.

Quite often the person takes the tablets, sometimes with alcohol as well (which doesn't have any potentiating effect as it does with barbiturates) and waits until the abdominal pain is unbearable before seeking help. By which time it is too late.

There is also the point that some Australian studies have indicated (apparently it's a very popular analgesic Down Under) - that daily amounts as little as a gram (2 tabs) cause cumulative and subtle but irreversible liver damage. In this case we're talking like 40-50 years but it's still bad news.

Dear Blogger, when you have finished sorting out the Allow Comments glitch, how's about allowing Editing of comments once posted? Thank you.

Should confess I borrowed the shades off AJ as the sun was much brighter than anticipated. :-)

Charles, I acknowledge this. The paracetamol I take I take with Tramadol; they have a combined tablet called Trammacet but because of the doses, I'm taking Tramadol proper just now (kind of an in betweeny dose).

I do take the dangers of paracetamol seriously; have had two friends have very near brushes with ODing, although one before I knew her.

I'm more frustrated by the Health Authority than anything. However, 32 doesn't seem a sensible limiting number, since clearly it is enough to kill a person or else cause serious damage. And it is still a killer, they reckon well over a hundred people a year in the UK...

Everyone else has said everything else (thanks CD for explaining the drug effects) so all that is left for me to comment on is your hair parting. Its perfect. Every time (well, not every time) I see my Bump she says "MUM I'VE TOLD YOU YOUR PARTING IS TOO STRAIGHT AND ITS SO AGEING - mess it up !"
There you go !

Sorry, Goldfish, I really wasn't getting at you.

I agree the 32-limit is ridiculous. I suspect it was a hard-fought compromise between the Govt health advisers and Big Pharma, for whom the drug is a nice little earner.

I just wanted to seize the opportunity for some propaganda. I have seen too many silly little girls and men for that matter, made so desperately, fatally ill when all they wanted was a bit of understanding attention and help. And thought Panadol was a safe way to get it.

Charles - no problem, didn't feel got at and it is very important information. Most people don't know the functional difference between aspirin, ibuprofen and paracetamol, let alone their relative dangers (as someone who has suffered the effects of ibuprofen, I can't bear to watch people take it on an empty stomach, but they do).

I had purple streaks in my (mid-blonde) hair for about six months and, although looking rather funky, it did make my already deathly pale face take on an even more translucent shade of grey and scuppered my already low chances of finding respectable employment. You, luckily, seem to have avoided such an effect by going for a red-purple and damn if it doesn't look good, espeically with the blue.