How many kinds of sweet flowers grow in a somewhat neglected garden? 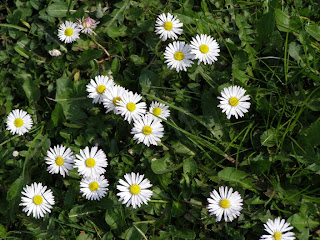 I was going to write another serious boring post today, but instead I shall show you pictures of flowers. Charles Dawson has been sharing the manifestations of spring in his garden and I've been watching the ongoing progress of spring over on Kethry's Blog.

It is really great having a garden, even though we've done almost nothing with it so far and being rented accomodation, there's not been much done with it in the recent past. All we've done is put a picnic bench out and some pots full of pansies, which I didn't bother photographing today. 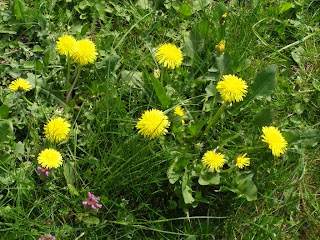 Fortunately, I like weeds! Perhaps I have some sort of affinitywith them, I don't know, but I think they're really pretty I like daisis and dandelions and nettles - of which we have two varieties! We also have some things with long stalks and tiny white flowers which were impossible to photograph. 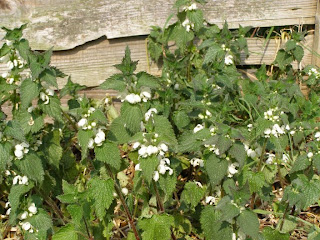 When I attempted to discover the names for our two varieties of nettles and to work out whether or not they stung, I discovered that next month they're holding a Be Nice To Nettles week. And so we should. I think. Probably. 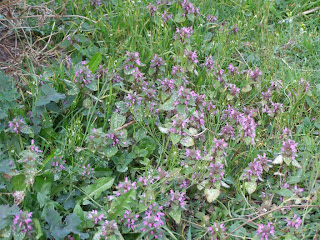 Apparently what we have here are Purple Dead Nettles and White Dead Nettles or as I prefer, the Purple Archangel and White Archangel and neither of them sting. The bumble bees seem particularly keen on the white ones. If I like, I can mash the stuff up and make a detoxifying tea for my kidneys or a compress for my wounds. Like in The Outlaw Josey Wales. Very useful stuff. 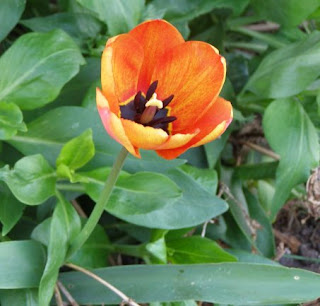 Bizarrely, we also have one or two proper flowers and I could do with some help with identification. Is this flower, on the left a poppy or a tulip? There are two of them so far. I thought tulip, but then I thought, perhaps it is a poppy? Thus I display the true depths of my horticultural ignorance. 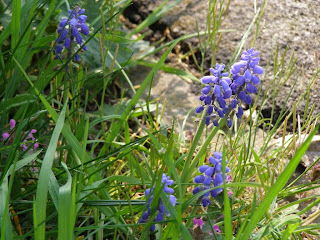 I know that these are bluebells on the right, of which we have a few scatterings. Not as many as Sally got to see the other day.

I suppose bluebells may be considered a weed as well. Who cares? I am kind of rambling on at this stage such that the photographs don't run into one another, can you tell? 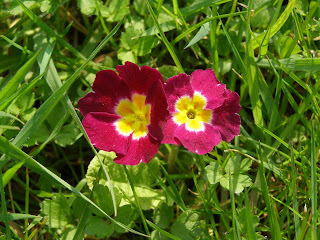 And is this here a primrose? Or perhaps a primula? Any ideas? It is just sat there in the middle of the lawn, which needs cutting. I am wondering whether it is possible to rescue the thing?

In other news, I have nearly given up reading my news on the BBC News website after, following the news of futher discussion of the latest Mental Health Bill in parliament, they decided to have a Have Your Say debate entitled Should the mentally ill be detained against their will?

Not even Should some mentally ill people be detained against their will? which wouldn't have been a very pertinent question, considering that some people with mental health impairments always have been detained against their will for periods and all that is suggested is a change in the criteria and process. It is an important debate. Proposed changes include detaining people who are anticipated to behave dangerously, and detaining people who are not felt to be able to benefit from treatement - such as people defined as having Personality Disorders (horrible diagnosis that). But these issues are really complex and really extremely important for disabled people and society at large. Should the mentally ill be detained against their will? is a bit like saying Should all immigrants be deported?

See, did manage a little bit of serious and boring, after all.

Not bluebells my dear - grape hyacinths. Probably a primula - there are millions of varieties. And yes, probably a tulip.

One of the delights of a wild garden is the variety of plants we can discover therein - don't let anybody do any weeding for a year, so you can see what you've got.

As to the serious bit - it's too nice an afternoon. Will try again later.

Thanks for the lovely sunny pictures. I do love the small flowers that grow in amongst grass and imagine being really small and exploring my way amongst them. I've been so delighted by the gardens around my house recently. My absolute favourite is Japonica in all its pinky shades.
Considering the amount of people on anti-depressants, there wouldn't be enough sane people to detain us all. I have in mind some surreal orwellian scenario where we're all trying to stop each other from entering the sane world.

The orange flower is a tulip. Also, yes, that pink and yellow one's a primrose and a primula; primula = primrose as tulipa = tulip. And Charles is quite right about the muscari (grape hyacinth), of course.

I like daisies and dandelions, too. I once took a fellow American to the Arnold Arboretum at Harvard University and she was appalled at the number of dandelions we could see quite plainly blooming everywhere. She is from the land of perfect lawn = perfect garden, you see, and all the chemicals that go with that, and thought it absolutely disgraceful that the despised dandelion should be allowed to live in a botanical garden. She didn't understand why I kept breaking into peals of laughter every time she complained.

Oh yes, now you mention it, they're not nearly bell-like enough to be bluebells. Well I got the blue bit right at least. :-)

Fluttertongue, I had to look up Japonica but yes, it is very pretty. Also another flower which can be used for all manner of medicinal purposes, apparently.

As indeed, are dandelions. You're supposed to put them in salads I think? I shall look that up. But rabbits and guinea pigs go wild for the leaves. Not sure about the flowers.

I have always liked bumble bees. My name means bee in Hebrew and when I was little I used to pick them up and close my hands around them to feel them against my skin. Never got stung, despite the gasps of horror from onlooking adults.

You can put dandelion leaves in salads but they are very bitter. The French blanch them like chicory.

The French word for dandelion, BTW, is pissenlit, so be warned!

I think dandelion greens are only eaten when very tender--once they're old enough to be supporting a flower I don't think they're supposed to be eaten.

I've taken a tincture of the root as a cleansing agent. Not the worst-tasting herbal remedy out there, but only because nothing is as bad as pau d'arco.

Lovely flowers, one and all. On the more serious stuff, shame on the BBC. The trouble with this sort of debate is that if the chair, ie the BBC, doesn't have a grasp on the issue, then how is such a debate to be fairly or intelligently moderated? I'm all for the freedom of the internet, but it really doesn't sit well with throwing comments around that in effect call for denying other people their freedom. And, unlike for example Question Time, there is no avuncular owl present to rein people in and guide the 'audience' or 'panel' through the issue in hand. I really think sometimes the letters page of a newspaper is a better option - composing a letter, even by email, allows for due consideration and thought to be given to a topic before clicking that mouse or licking that stamp.

I get quite upset when our lawn gets cut - along with the daisies and buttercups.

Remember weeds are only a flower in the wrong place (well, usually)! Just say your lawn is biodiverse :-).

You can dig the primrose up and move it (but I think in the autumn).

can't help with flower identification (any more than anyone else has) since what i'm growing is veggie based stuff, as you well know (and thank you for the link!).. but i do know this much - be careful about eating leaves like dandelions, or at least, where you pick em from!! (you wouldn't want them from our garden, lets put it that way, not when we have a dog that pees in the garden). I also know that you can pick dandelion leaves, stuff em (lots of em) in a woven sack and plunge the whole thing into a bucket of water, and leave it there for a while. after a while (i forget how long), remove the sack, and the resulting gungy stinky water makes a wonderful organic feed for plants. You can do the same process with a number of other plants too - comfrey springs to mind.

thank you for sharing the pictures, i do like photos of flowers!!

love the color of the last flower.