I am very good at keeping secrets, but absolutely crap at telling lies. Never trust me with a secret about which someone is likely to ask me a direct question. I won’t say a word about you robbing the bank, I can sit through hours of discussion about who might have robbed the bank without given any indication of what I know. Just so long as nobody asks me “Do you know who robbed the bank?”

The killer is when I am particularly emotional about something. If I have heard some bad news about which I am supposed to be discrete and someone just happens to catch me when I seem upset and asks why, then it is as good as told. Which of course is a great problem, because bad news secrets are the most sensitive secrets there are. Fortunately I am not often burdened with bad news secrets, I have never been let down by my own confidants and bad news is usually only a secret for a short time; the dying person dies, the job is lost, the illness becomes visibly apparent, the struggling marriage fails - or indeed mends such that it doesn’t matter who knows about the bad patch.

Of course, I do manage to lie, but I lie very badly. I don’t understand this as I used to be able to act pretty well. Most of it is guilt, I think; whenever I lie I feel like I am assaulting the person to whom I am lying. It doesn’t matter if they’ll never know, it feels like a betrayal. Even when it comes to arranging surprises or buying presents for people, it is far easier to say, “I can’t tell you; it’s a secret.” than to use the simplest most plausible excuse.

Fortunately, the most successful lies are told, not through clever use of eye contact, tone of voice and body language, but simply because the recipient of the lie does not expect to be lied to. Most of the secrets that I am ever required to keep are ones which nobody suspects a thing about anyway and when they have asked, I have delivered the most clunky wooden fibs, lines far less convincing than “Is it raining? I didn’t notice.” at the end of Four Weddings and a Funeral (surely the most badly-delivered line in the history of film?) and the conversation has moved smoothly onwards.

This makes me pretty good at covering up for friends who are up to all sorts of mischief and indeed, my own mischief when I have the opportunity to get up to some. Unfortunately (or perhaps not), I will never be able to lie to AJ about anything. I used to be able to a bit on trivial matters, but it's gone completely now. Cannot be done.

Hmm. This post is necessarily obfuscated. It may sound like I am talking about nothing at all, but it is good to get out of the system. 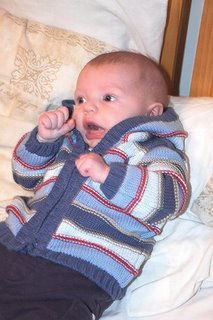 In other news, Alexander has been involved in his first rock’n’roll car crash! Fortunately he remained asleep throughout, whilst his father sustained whiplash. Still gives me an excellent excuse to post this picture of Alexander looking somewhat alarmed in a rather fetching cardigan.

In a less dramatic nephew-related development, Alexander told me (literally, he gabbled on for some time before his mother translated) than he has a his first tooth coming through. Apparently it bothered him a little but now he is quite happy with it.
Posted by The Goldfish at 8:56 PM

I am not very good at telling lies either. But it depends a bit about the people involved. It is easier if the person I have to lie to is someone I hardly know. The closer I am to someone, the more difficult it gets. Probably also, because those who know me find it very easy to tell that I have just told a lie.
All the best for your trip southwards. Hope you enjoy it. And tell Alexander that he has already become a celebrety in the blog world. Once he has understood what teeth are good for, he will certainly want more of them! That cardigan is lovely.

Any excuse for a picture of Alex :)

I find that Big Secrets are easier to keep, don't laugh, when you tell someone, but just one person.

Preferably anonymising the details, and telling someone who is in no way connected to the person(s) involved, and understands the confidentiality, but nevertheless just speaking the words.

That's how official counsellors and psychologists work - they have to have regular "debriefings" with another counsellor so that they don't explode under the pressure of all the aargh they deal with daily, or start talking about it to non-confidentiality-bound people, or feel like it's all on their shoulders and they must do something.

The other tactic I use is to excuse myself from the room if a dodgy topic comes up - go to the loo with my handbag (people assume I've got my period or need medication or something) and sit and play Golf on my phone for five minutes while thinking of new topics of conversation I can introduce when I go back to the room.

Hi I have enjoyed reading this post. I found your blog listed in Technoranki's Top 200 blogs and I am visiting them all one at a time to see what makes a good blog. It is easy to see why yours is popular. Your writing is excellent. I like the topic too. We all lie all the time to make people feel better. 'I like your hair', 'That dress looks good on you', but it is the big lies that are hard to tell convincingly. Like you I don't like to be entrusted with state secrets. If I am asked a direct do you know question, I blush giving the game away and have to insist forcefully that it is a secret.
Nice post.
Kate.
http://journals.aol.co.uk/bobandkate/AnAnalysisofLife/