A slight lie, but it made for a good title. I thought we were going to the Wits End Café at Sandsend. In the end we went to the Sandside Café which is at the other end of the village. Same difference; both very nice, although the Wits End is recommended if you come in the winter on account of the fact that it is (a) open and (b) they have a wood-burning stove and you can sit watching the dark skies and raging seas, drinking hot chocolate and feeling rather cosy.

My friend P and I got a taxi to Sandsend, the next village up the coast from Whitby and a very beautiful place indeed. We had apple pie and cream (and tea, obviously) at the Sandside Café and then strolled onto the beach. 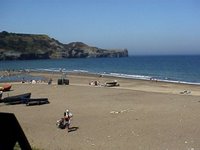 Here are the two views, left and right (East and West) from where we were. You can see Whitby pier and the Abbey on the West Cliff. There were lots of people on the beach today, most of them turning rather red. 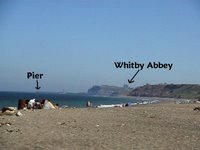 The sweetest thing we saw was a tiny little golden-haired cherub who was paddling in the brook with the ducks - he was little bigger than a duck himself. Obviously, he didn't get his photograph taken.

We went down to the beach and made our way to the water's edge bit by bit, having a sit down every ten yards or so. Then I had to do a dance in the sea; the first time I've set foot in the sea for some considerable time. P refused to join me on account of his delicate constitution and insistence that "That's nothing but freshly melted polar icecaps!" 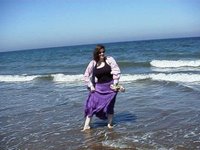 You may notice that the horizon is on the wonk. This is a natural phenomenon exclusive to this stretch of coastline.

You may also observe that yes, this was the hottest July day since 1911 and yes, it was 36°C even in parts of North Yorkshire, and yes, I did remain modestly dressed. This is because I am a reptile and I was still a bit cold, even today. 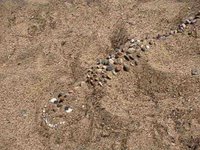 On the subject of reptiles, our coast here is famous for its wealth of ancient fossils. Here is an Ichthyosaur what we uncovered on the beach. It swam in the sea here 118 million years ago. It still looks rather jolly after all these millennia.

I hadn't been out of the house (apart from to the doctor's) for five and a half weeks, so this was a very welcome excursion. And I didn't feel sick at all today. I began to doze on the beach but at that point we decided to head back. A lovely afternoon.
Posted by The Goldfish at 7:44 PM

Exceptionally pleased though Lady Bracknell is to hear that the Goldfish has had an enjoyable trip out, she is not taken in by the faux ichthyosaur....

Her ladyship has a very suspicious mind. She and other readers may wish to compare our specimen to that in the Whitby Museum.

Her ladyship may also note mention on that webpage of The Gentleman's Magazine. Is there a similar publication for The Lady?

36 degrees and long sleeves?? I wish I was reptilian too.

Looks like a lovely way to spend the day!

Glad you had a good time, Goldfish. When I win the Lottery I am going to buy a small beach hut with all mains services and live on a beach all year round.

Congratulations, Goldfish. This looks fab. I am, of course, a big fan of the beach.

Goldfish by the sea, fabulous, so glad you had a great day out. Playing in the sand is so good.

That looks a perfect place for a great afternoon out. I love beaches too. (much more than mountains, by the way). I am glad you had a nice time on the beach.