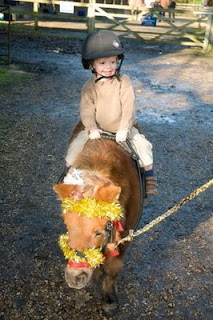 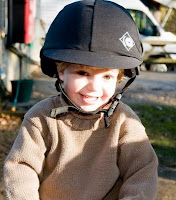 At the weekend, Alexander got to ride a real horse for the first time. For some reason, the pony in question had attempted to disguise itself as a Christmas tree.

I wasn't there but I thought I should share a couple of the pictures with you. And it is a milestone. Alex has previously only ridden his rocking-horse, which is about the same size. I guess riding a horse is on one of those lists like "50 things to do before you're 3".

Apparently, Alexander is a natural. I guess he'd have to be, what with being two years old and managing to sit on the horse without support. They even managed to trot.
Posted by The Goldfish at 10:27 AM

How incredibly cute! And what an inane little comment I am making. But still, that look of delight on his face, that hat, and that tiny, happy-looking pony, are just wonderful!