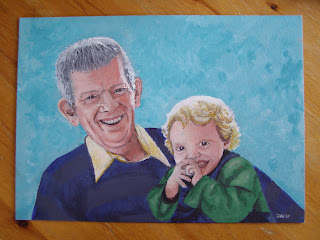 This one is of my Dad and Alex. I didn't paint the entire thing since last Thursday, but I hadn't quite finished it then. This was a bit of a challenge. I was working from a black and white photograph so I had to guess the colours to some extent. Also, the photograph cut off the top of my Dad's head, so I had to make that bit up as well.

I managed to get to Southampton to spend Saturday afternoon and Sunday morning with Alexander. He was very affectionate; either he now knows who I am or he is very easy with his hugs and kisses. It is also now far easier to comfort him when he's grizzly; previously, this was not something I could do myself, but now a cuddle seems to do the trick.

He has a few more words, but doesn't seem terribly interested in using them; occasionally he will point to something and name it, but he can't be persuaded to do it again and if you point to something and ask him what it is, he looks at you as if you have asked a very foolish question (which I guess you have).

Alexander is, however, increasingly expressive. He uses the baby-signing pretty well, he points and waves and hands things to you. He put his milk-bottle in Roosevelt, the bear-puppet's mouth. And his favourite gesture involves him holding his hands palms up, fingers spread wide and an expression somewhere between exasperation and resignation as if to say "What the hell?"

I managed the whole thing pretty well, especially considering the two flights of stairs in my sister's house, and a pretty bad night, complete with some of the most profound hallucinations I've had in ages. Nothing scary though, only disconcerting. I am in no great shape now, but I'm basically okay.
Posted by The Goldfish at 11:33 AM