I don't care too much for money

So the other day, Lawrence Fishburne (or somone who looked very much like him) came to my door selling investment policies. He spoke very slowly but without hesitation so that before I could get a word in, he had explained all about his policies to help people put their kids through university and other policies to provide security in retirement. Which of the two, he asked, might I be most interested in?

"Neither," I said with a smile, "Thanks all the same."

"So you've got all your finances sorted out for the rest of your life already?" he asked, clearly dubious.

Now that was pushing it. There could be lots of explanations for my disinterest which might be highly personal, whether I was surprising rich or surprisingly poor. And indeed, I didn't want to tell him my actual situation, partly because it was none of his business, but partly because he might be embarassed. He might even feel guilty for having asked had he known. He might have even offered me money, but probably not.

So I weighed up my options.

"No, but I'm relying on tax-payers like yourself to see me through."
or "No, but I don't want me kids' heads to warp with too much learnin'."
or "No, but I'm planning on dying young."
or indeed "No, but I've only got three weeks to live - do you do life insurance?"

"If I were to become just four pounds and thirty-six pence richer, I would have more money than sense."
or "They say there's gold in that there compost heap."
or "The Lord will provide."

or perhaps, if I really wanted to frighten him and if I could get the tone just right,

"Money is the root of all evil."

As it was, I shrugged and said, "Kind of." He nevertheless gave me his card and departed with a wink. A wink, I tell you. From Lawrence Fishburne (or somone who looked very much like him).

It is a difficulty though. Like when you're offered those Payment Protection Plans on credit cards and the like and you're thinking, "In what way could my financial situation get worse?" (Of course it could be worse, but nothing anyone would offer insurance against).

I was once accosted by particularly persistent charity-collector, one of these who is paid on commission for the number of people who sign up for a direct debit donations and who really couldn't imagine why I might not be able to afford monthly donations to a charity supporting people of my own age in circumstances not at all dissimilar to my own. And yet, I did not wish to explain all that, to say I lived on benefits and to detail my exact position; even the richest person should not have to make excuses. So eventually I declared, "I'm afraid I'm a charity case myself!" and the young man was, at long last, speechless. 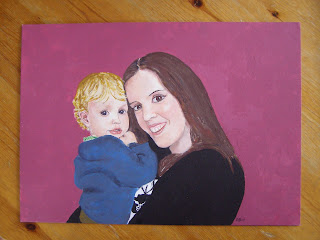 Anyway, I'm off to visit Alexander, Rosie and Adrian this weekend. They have lived in Southampton for over a year, and this is the first time that I've had the opportunity to visit when I've actually felt up to going. It's just a flying visit with my folks to babysit Alex whilst R & A go to a concert and I shall be back on Sunday.

This is a picture I painted of Rosie and Alexander - my second portrait. I've almost finished one of Alex with my Dad and I must say that, despite his cuteness, the lad does have a rather boring face - no lines or wrinkles or anything!
Posted by The Goldfish at 7:43 PM

I have to say that if Lawrence Fishburne turned up at my door offering the red pill or the blue pill, I don't know what I'd do.

I do like your come back lines, and yes, I have had that situation and I find that bursting into a bitter laughter just confuses them.

Indeed, I was recently accosted for not giving money for making sure animals were taken care of correctly - which considering my medical condition and testing done on ME at that moment, I was having a stretch to figure out how much fur I would need to get people on the corner with a pic of me raising money to stop the testing.

I hope you have a good weekend away and I like the picture, more please!