8 Random Facts about the Goldfish

I have been tagged twice with this, by Jemma and McEwen. At Andrea's Buzzing About, the Meme mutated! I am very excited about this extraordinary development and will do that one soon as well. But for now, the original;

1. Let others know who tagged you. (I did that already).
2. Players start with 8 random facts about themselves.
3. Those who are tagged should post these rules and their 8 random facts.
4. Players should tag 8 other people and notify them they have been tagged. 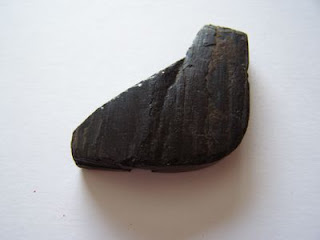 1. I mention this to the Unreliable Witness the other day. I carry this bit of jet around everywhere. As you can just about make out, it retains the texture of wood, specifically Araucaria araucana which is the monkey puzzle tree. North Yorkshire used to be covered in such trees during the Jurassic Period, over a hundred and fifty million years ago. They then got squished and squashed and moshed and mished until they became very very black and very very hard. Thus jet.

My friend H gave it me. He is a jet-carver and he decided I needed a piece as a lucky charm. I think this was a test after I accused him of superstition over something. It's a little bit magic to hold; lighter than you would imagine and warm. The only bits of jewellery I have of any value (as in, they'd cost more than a fiver to replace) are made of jet and they're very precious to me for more complicated reasons. But that's my bit of raw material.

2. When I was looking for my piece of jet, I found a spark plug socket in my handbag. I have no idea how this got there. I fear I may have accidentally stolen it from somewhere. Have you lost a tool for removing spark plugs? Did you see me, behaving suspiciously, in the area shortly before it disappeared? 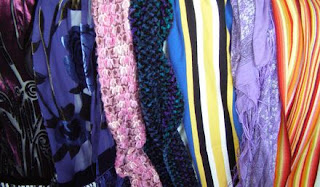 3. I have a vast collection of scarves, all of which were gifts to me and all of which I love. Okay, so seven scarves but that's six more scarves than a person needs, isn't it? And no, they don't look very good piled together, but hey - you have to picture each one by itself with a grey trenchcoat.

You may notice my Open University scarf, as worn by Julie Walters in Educating Rita - not that exact one, obviously. Curiously, two scarves were given as souvenirs from Florence, Italy, by two different parties, ten years apart.

4. I had trouble walking to begin with. I was on my feet soon enough, but I walked like a penguin, apparently. I can vaguely remember having to go see some expert about it and having to walk up and down a room. Later, of course, I was very good at walking; I walked for many miles at a time and ran for many miles at a time. And then I got rubbish at it again, but not because I started walking like a penguin. A moving story, I know.

5. I've never been in debt, except for once was when I accidentally and very temporarily overdrew my current account by £19.50 (this was many years ago, but I remember the sum because I was mortified). I put my debt-free existence down to 50% circumstance, 40% good fortune and 10% good judgement. I haven't had a good excuse to borrow money (and I do think there are good excuses) and I've always been fairly lucky with the way things have worked out.

6. Yesterday, I contributed to a wiki for the very first time. I put an article about Blogging Against Disablism Say up at Disapedia, which is a wiki all about disability. Zephyr mentioned this on the Ouch! Blog this morning. I reckon this is a really great idea, which naturally relies on contributions from all of us, so get over there. 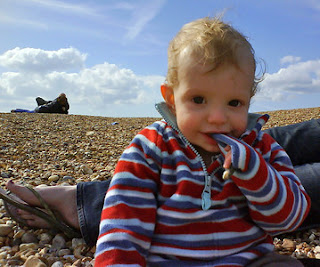 7. I am writing this on my new computer. I haven't told you about this even though I've had it over a week. Remember I was going to sell my powerchair and buy a MacBook? Well instead, my brother-in-law - who took this gorgeous picture of Alexander - gave me his old iBook, which is like a MacBook but older and yet is in pristine condition and has far better spec than I could have afforded buying a new MacBook. It is a fantastic machine, I love the user interface, I am very very pleased. And it was free! See above about my good fortune, eh? The only downside is that there's inexplicably no hash key, so you have to press ALT 3. Why no hash? Why?

8. I am related, in a very roundabout fashion, to the great Andy Williams. As I understand it, my great-aunt married an American, whose sister married Andy Williams. I think. Or the connection may be even more tenuous than that. And a second cousin briefly dated Michael Hutchins. It's a rock'n'roll kind of family like that.

Okay tagging. Forgive me if you have (a) already been tagged or (b) no desire to be tagged - there are no Meme police, this is entirely optional;
Sage, Marmiteboy, Sally, Cusp, Timbo, Diddums, Fluttertongue, Mark.
Posted by The Goldfish at 5:55 AM

Well, no one can acuse you of not knowing the meaning of the word "random"! A spark plug socket? Hmm ...

I've often wondered myself about the lack of a hash key on the Mac keyboard -- it's the same on my MacBook so I'm guessing it's an American thing (although I do have a pound and a Euro symbol).

Scarves eh - it would be wrong of me to say 'I have more than you do,' so instead I'll say 'I like more than you like yours.' I don't like them for sentimental reasons [think jet!]

I'm shocked to know that I might be associating with someone who is light fingered! Or is it really 'light minded'?

As for relatives, I was always under the impression that I was VERY closely related to the Queen - my mum told me so, but she left out the specifics.

Cheers and thanks for playing along

those were all random and really interesting to read! :)
Alexander is a very handsome young lad..

I have a random fact about you - you are featured in the latest edition of carnival of the feminists.

please come and have a read and if you get the chance publish a link. ta. cru

I didn't know how to find a hash on my Macs - that's always annoyed me! Thank you. No longer do I have to search for an example of it, copy, then paste.

These are interesting random facts - I won't do as well, but I'll try. Time to dig out the slate and chalk.

And then I realised that was Tony Christie.

I had no idea jet was made of monkey puzzle trees. The things you learn from blogging! I also like that story a lot. Everyone needs a talisman given out of love. Even if it doesn't actually affect one's luck -- not that you will ever catch me saying that it doesn't; logic be damned -- it is a constant reminder of someone else's interest in your well-being, and that is a wonderful thing to have in your pocket.

does the jet rub off on anything in your bag? do you have to keep it in plastic or do you just sit it in with the rest of your stuff?

Crikey I am late, I think I must have read this on a drug down day, and I truly thought I had acknowledged with pleasure and thanks, being tagged. So sorry Goldfish. I have been thinking and working on it, enjoyably so.

That's interesting about the keyboard! I have an American MacBook, and it has a hash mark # above the three. OTOH, when I want to type the £ I have to use the option + 3. I think that to include the £ easily they substituted it for the hash.

Sorry I'm so slow, but I've been a bit out of it and Midwesterntransport (long time, no see - hope life is treating you well) asked about jet. No, it doesn't rub off on anything. You can scrape a reddish mark with it if you scrape it against something like a very hard rock, but it isn't inherently dusty, no.