Today I am a small blue thing 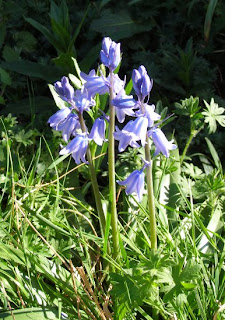 Now, they are bluebells, aren't they? Unlike the flowers I identified as bluebells in an earlier post. Yes? Good. They're up in our garden now, whereas those bluebell-imposter plants (grape hyacinths, as identified by readers) have gone.

I am afraid I am still rather fragile and have spent a few days watching the light crossing the bedroom ceiling. But on... a day, recently (it's all got muddled) I went shopping with my Mum and bought flip-flops. Or thongs, as I think they are called elsewhere in the world, although here, a thong is an undergarment for people who feel it is important to wear pants - uh, underpants - but undesirable for any closely observant onlooker to know they're wearing pants.

Anyway, my flip-flops are purple. There is little else to be said about them. Enthralling, I know.

In other news, I am sure that Alexander is on the verge of talking. We are having lengthy conversations on the telephone in which he yabbers on, pauses for me to speak and yabbers a reply. He has a noise which is very close to Hello. More like Ewoah!, but hey, that's close. And he has a noise which is definitely affirmative. I can't really describe how I know it means Yes, indeed, absolutely! when it comes out more like Dawah! but I know what he's getting at. 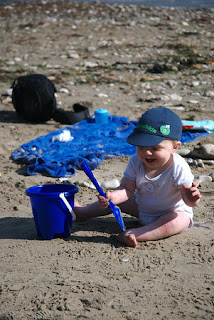 He was particularly proud to tell me that having mastered sitting up by himself (a task he found impossible when he visited less than six weeks ago), he is now pulling himself up into a standing position and letting go of whatever he has hold of for several seconds before falling on his arse. It is only a matter of time before his physical abilities overtake those of his auntie.

The only big negative about our conversations is that Alex hasn't really figured that the English language doesn't incorporate screaming, which seems his way of articulating that something is great fun or very exciting. Just as the pitch of your or my voice might increase as we speak more excitedly, as does his, only it gets higher and higher and higher until it is right on the edge of human hearing and all the dogs in the vicinity go wild.

It is incredibly high-pitched, it seems remarkable that it doesn't cause him pain to make such a noise. And it sounds really bad down the phone. Doesn't help of course that, unable to be cross, one responds with laughter and laughing makes the child even more excited.

Apparently, my first word was gullysucker. A gullysucker is another object which may be known by other names elsewhere in the world. It is a big lorry (uh, wagon or truck) with a suckery thing which sucks all the dead leaves out of the gutter as it goes along. I have no idea what else you might call it. I don't actually believe that was my first word, but so goes the legend that I pointed to this object and identified it correctly. It is an especially dubious story as my sister is accredited with helicopter. Parents are fanciful creatures.

Another unlikely first-word story is that of Alexander's father, Adrian, who was rather delayed in speaking and didn't say anything until he was about three. Adrian's Dad was in the forces and while he was away, his Mum would put the toddler on the phone so his Dad could speak to him. On one such occasion little Adrian was listening to his Daddy in his acccustomed silence, when suddenly he declared, "We been missing you Daddy!"

Almost mastering the past pluperfect before uttering a word. Is that the pluperfect? Or the imperfect? I don't know, in any case, it is quite incredible.
Posted by The Goldfish at 11:56 AM

I've known too many two-year-olds who pretty much refused to speak, apart from when someone uses a swearword that they haven't heard before. Upon which, they repeat it perfectly.

Sometimes it depends what counts as a word - is "mamamamamamamamama" a word, or just a sound? Is "ewoah!" a reasonable attempt at "hello" if used in the correct context, or must we hang on for starting with a distinct "h" and managing the "ll" too? Is "juice" still counted on the word-score if it covers not just juice, but any liquid found in a bottle or beaker?

We guessed you were sleeping BADD off, not like sleeping off a hang-over, altho' just as necessary.

I once had a conversation (him first, me replying, then he following on) with an eight month old, and his sentence structure was remarkable, and yes it made sense - and he had red hair ... that must be the reason.

My first word was woof.
My son's most endearing, if not first, was chipduckpark. A park where his two most favourite things could reliably be found.

Sorry you were so wiped out but glad you're feeling well enough to write again.

I was always astonished, listening to Z.'s early sounds, that English doesn't have at least 4 or 5 different consonants that sound like Bronx cheers.

You have an awfully cut nephew!

gullysucker=street cleaner for me. But I might start calling them gullysuckers now!

I love people's "first words" stories. I've never been told what my first word was, but I am frequently reminded that my first full sentence was, "I do it MYSELF!"

My son's first word was, "hungry." Nine years later, it's still his most frequently used word. ;-)

I thought my first words were gullysucker, radiator and helicoptor. I though yours was aaaaaaaaaahhhhhhhhhhhhhhhhhhhhhhhhh
Strange how history distorts these things :-) I also remember you saying 'she did it' a lot in the early years.....