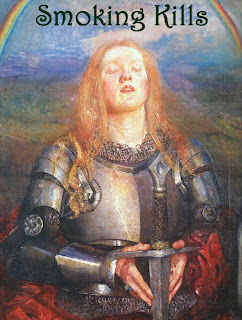 BBC News: Church no smoking signs condemned
(I'm sure that should involve a hyphen, but hey.)

I am one of the very few people I know who have never put a cigarette to their lips. When I was seven or right I was sick off school with the flu and saw a programme on the television which must have been meant for teenagers to deter them from the demon weed. In my case, it gave me more information and gruesome mental images than a seven or eight year old really ought to have and I became very concerned about my Dad's smoking.

This was one respect where I was quite naughty and got away with it because Mum hated the smoking and Dad knew that to defend his habit would be to condone it in us should we wish to have a go (he knew this, because I told him as much). I would hide the cigarettes, I once dipped all the tips in soapy water and put them back in the packet. I would collect all the butts together and stew them in a jar of water before declaring, "Yuck! That's probably what it looks like inside your lungs!" 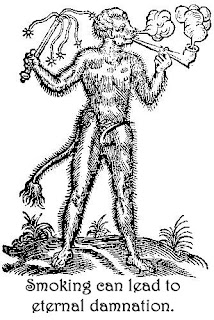 I know. But I felt very let down; if Dad didn't want us to watch him die horribly (which I was sure was imminent), he'd stop. If he wanted to set a good example to his growing children, he would stop. My world was uncomplicated like that.

The UK government has taken what I consider to be the entirely sensible move of banning smoking in all places of work, effective from the first of July. This is a health and safety move and it'll also enable some disabled people to work or simply go to places they couldn't previously access; people with severe asthma or cystic fibrosis for example, who simply haven't been able to go for a drink in a pub. Wonderful stuff. 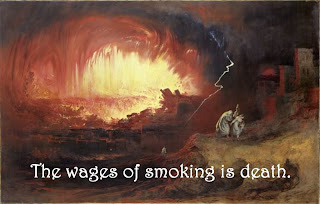 However, it's only bloody cigarettes. Everyone understands what the ban means. You don't need to put no-smokings signs up in churches - since when was it ever okay to smoke in church? And I do wonder what a smoking compliance officer might actually do that another health and safety worker couldn't. We don't have signs up in places of work or special officers coming round telling folks not to sexually harass one another or stick pencils up our noses.

I find it all rather suspicious. Well, of course I'm not that bothered, I'm just writing this post as an excuse to post my ideas for no-smoking signs that could be used in church. You knew that, didn't you? I spent a while thinking about Moses, the burning bush and the pillar of smoke, but I didn't get anywhere. Yes, I know, quite tired today, head full of nonsense.
Posted by The Goldfish at 5:53 PM

Ha - I thought the world was going mad in this rural back water, then I read it on Goldfish: yes, our little village church has to erect a sign outside and adjacent to the the venerable door stating 'No Smoking'. Daft.

Indeed, I have never been bothered by second-hand cigarette smoke in a church in my life - including the period at the Roman Catholic primary school which involved quite a lot of church.

Used to get huge sneezing fits from the incense though. Very keen on the incense, was Father Canstale.

On the other hand, I once had a class of eleventh graders who liked to put pencils up their noses.

Is it true that smoking while driving is to be made illegal as well? Why on earth?

Love the illustrations, BTW. If you're not careful the ASH people will pinch them and use them for real!

Charles, I don't mind people smoking in cars, but I mind when they flick ash and then a burning cigarette end out of the window and onto a passing/following-behind pedestrian, cyclist, motorcyclist, mobility scooter, kid in a pushchair...

Actually S., when we were at primary school (uh under elevens), there was a point at which we were convinced that you could get high from sniffing wax crayons. I don't know how this started, but there was quite a market in the things, especially the metallic colours which smelt quite distinctly...

I'm with Mary about ash, but that is already covered by littering - in fact there was a case in Poole last year which seemed a little extreme, but still.

If somebody's that dumb, what else will they do? I mean, anything thrown from a car window has the potential to be lethal - bottles which smash, metal which cuts; anything hard if it hits the right spot, even a sweet or a lump of chewy could put an eye out....you can't legislate against every possible missile in detail. Seems to me better to make throwing anything out of a moving car a felony in the first place.

I think that, as in the case linked there by Goldfish, it IS. But people - even the people who would hesitate to throw, say, their McDonalds cartons or crisp packets out the window because it's littering and Not Nice - are convinced that "only a cigarette end" doesn't matter, because it's so small/biodegradable/not something they're prepared to keep in the car.

They tend to not be bikers.

Surely the thing about smoking while driving is mechanical, if you like, rather than health. THat is - ytaking one hand off the wheel to lift the ciggy to lips, tap the ash off - or even light it.

Mind you that doesn't equal a little bit of a "From Our Own Correspondent" which said about a lady using a mobile phone, breast feeding and driving. That's what I call mutli-tasking.....

What amazes me is the odd people who get done for reading while driving! One character was, believe it ot not, reading a newspaper!

To me it's crazy that churches have to put up no smoking signs.

The world has gone mad!