Following a rollercoaster nine months in which Alexander, of Tinker & The Taylors, has taken the world by storm with his death metal, classical music and Glam Rock, the young star has been taking some time out from rock'n'roll to launch a career in the movies. Our reporter talks to Alex about this change in direction. Photographs by Mummy. 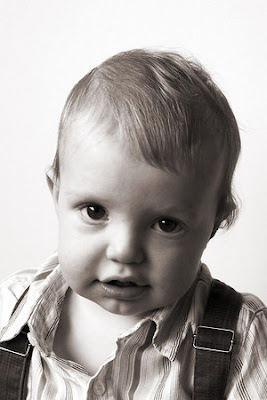 Alexander's acting talents were first noticed by critics when he took a crawl-on part in a remake of the Hitchcock classic, The Baby Vanishes. A further cameo proved to be the highlight of the otherwise tedious Sleepless in Southampton and Alex is now taking a break from touring with the band in order to pursue his first major role.

I catch up with the star on the set of his latest movie, The Eternal Sunshine of a Spotless Behind, in which he stars as a baby who has nappy rash, which is cleared up with the help of Kate Winslet. I ask Alex whether he has any formal dramatic training.

“None at all," he replies with a giggle, "Everyone knows that once you’ve been a rock’n’roll star, you can do anything; end world poverty, stop global warming, whatever you like! Some of our finest living actors started off in rock’n’roll – such as Johnny Depp, Jack Black and Will Smith, my co-star in The Pursuit of Nappyness. All were very serious and critically acclaimed musicians at some point.”

Alexander famously admits he has never been to the theatre or cinema and he doesn't pay a lot of attention to the television - although he has managed to turn it on and play a DVD when nobody was watching. So how did his interest in acting begin?

"Last Christmas - which was, of course, my first Christmas - I played the part of Baby Jesus in the carol service at Church. The part was offered to me at the last minute, I barely had a chance to look at the script, but it all seemed to come to me quite naturally. If you can pull off the role of the Saviour to several billion people around the world, I figure you can do romantic comedy. 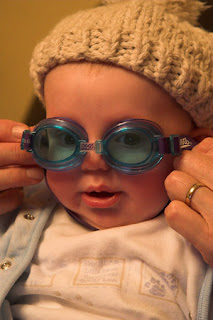 “Also, being a baby, so I am used to being dressed up in all sorts of silly clothes, which I think helps. My own auntie, for example, having been asked to dress me after my nappy had been changed, attached my socks to my ears and put my trousers on top of my head. I was very confused about it all until Mummy came back and put it right. It seems my grown-up audience has a real appetite for visual comedy, whereas I prefer more subtle cerebral humour. Like when someone blows a raspberry at me. That’s so funny! Ha ha ha! Ha ha ha!”

Alexander continues to laugh for some minutes. When I can finally get a word in edgeways, I ask Alexander how he approaches a role. In his latest project, he plays a baby with nappy rash. Is this something that he has found particularly challenging? 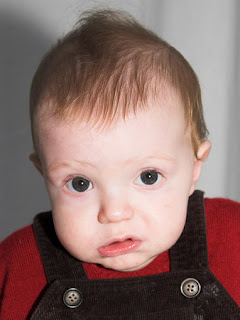 "Naturally, I have great sympathy for babies who have nappy rash," Alex gurgles, "When I think about what it must be like to have an itchy bottom, I can summon up my serious face. Do you like it? It involves far more work than you'd imagine. I think I look rather like a young James Dean. Or at least the expression James Dean would have made, had he ever had nappy rash."

Alexander has a hectic summer schedule ahead of him, with his first birthday in August and, in just six weeks time, his Christening. I ask him how he feels his spirtual faith impacts on his work.

"I think some of my fans are worried that my getting Christened is likely to have a detrimental effect on my music in particular. But I have a very simple answer to that; there are lots of Christians in the world, but there's only one Cliff Richard." 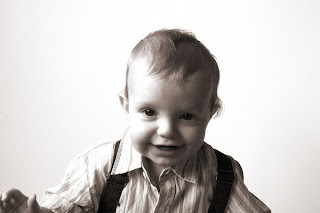 And what about the future, is there any danger that the call of the silver screen may draw Alex away from his rock'n'roll roots entirely?

"I am not yet nine months old," he says, "I am growing all the time and soon I am probably going to be speak and walk and perhaps even sing in tune. I think it is entirely sensible to explore a wide range of possibilities at this stage in one's career.

"I would like to get back in the recording studio, but I would also love to do some theatre work, perhaps some Shakespeare. I am sure there are several parts simply made for me; Baby Macbeth, Pramlet and I intend to put the cute back into Mercutio."
Posted by The Goldfish at 11:42 AM

Alex better get going! there are younger rivals coming up all the time.

I heard of a Hollywood actor who was sacked at age 3 weeks because the producers decided he looked "too old" for his part.

Too cute and funny! Alex is way to talented to ever have to worry about getting gigs. Happy Mother's Day!

I had a good laugh. The photograph with Alex wearing these goggles is my favourite. And it is good to see young actors able to express serious concerns in their facial expressions. All the best for your career, Alex!

Tears of joy, laughs to raise the neighbours, seriously fun raising on this wet Sunday afternoon. That boy has a hell of a future and much fun coming his way with Aunty Goldfish. So cute.

I hate to be the one to break it to you, but in 13 years time, when Alex's first girlfriend stumbles across this while googling for her beloved, you are *not* going to be his favourite auntie...

Some omissions in the list of pop stars turned actors: