How it should have been 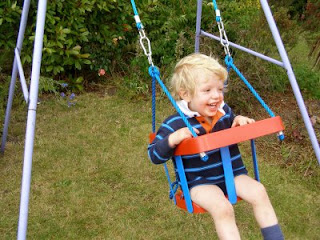 When Alexander was born, I made a promise to myself not to mourn for the auntihood I might have had. Even saying that sounds melodramatic, but I have a manipulative imp and this is just the sort of thing it'll pick on when it wants me to feel sorry for myself.

Alex was born exactly ten years and one day after I acquired these limitations. I was never going to be any other kind of auntie. Before Alexander was conceived, I didn't know I was going to be any kind of auntie and whilst I had my hopes, I wouldn't have had any complaints if it wasn't to be. Alexander is a gift. And he can only be better off having me as opposed to no auntie at all.

But. This week Alex and Rosie have been staying at my folks, I've seen a lot of them both and earlier in the week I began to feel rather sad and guilty.

Alexander is the most physically active not-yet-two-year-old I have ever encountered. He can sit and play quietly or be read to, but he seems to need to spend most of his waking time hurtling about, dancing and climbing things. Fortunately he is also very good on his feet and resilient; he doesn't often fall over, but when he does he generally picks himself up and carries on without complaint. At the play park, he heads straight for the big children's climbing frame.

So there's a part of me that minds that I can't play all the games he wants to play. And I feel very guilty that I can really only cope with a few hours of his company before I am fantastically exhausted. And when fantastically exhausted, I need and desperately want to be away from him as soon as possible. Which is an awful way to feel about a small child, when they're not even playing up.

And I was thinking about this when I read (I forget where) someone lamenting the tragedy of their becoming disabled with, “I should be playing football with my grandchildren!”

The focus of loss is a personal thing - maybe this was a relative young person who had been a keen footballer - but it struck me as an interesting kind of should. Because of course, lots of grandparents can't play football with their grandchildren. Personally, I knew I was lucky to even get to know all four of my grandparents; I know people are living longer and healthier lives than they were, but still. I imagine impairment would be quite different for parents; there are some roles it must be very difficult not to be able to perform oneself, but the rest of us? We're all here to throw in whatever we've got to offer. It's all complimentary, for both parties. 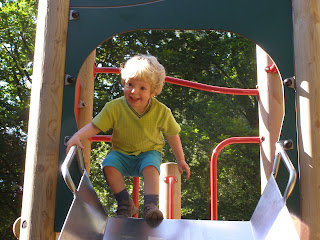 Then we were visiting my Gran and I had taken a very restless Alex into the garden. I followed him to the end of the garden once and back and realising I couldn't do this a second time, I sat down in the middle of the grass and watched as he ran ahead. He took his place on the bench and waited for me, rather anxious to find I wasn't right behind him.

After that I found several other games that involved Alex moving about a great deal while I stayed very still. My favourite was one where I threatened to come grab him and made very slight movements as if about to pounce; Alex would run away giggling, then edge back towards me, still giggling, until some twitch of the finger sent him running again. And thus I got over myself.

It has been a lovely hectic week. I shall now enjoy the silence and catch up with my blog-reading. Oh and happy Independence Day to my American friends, hope you've all had a good one.
Posted by The Goldfish at 9:26 PM

I think being around small children is mentally and physically exhausting for even the healthiest of people. My boyfriend looks after his nephew once a week, which generally results in him returning home half dead and covered in dubious stains! :)

As Alex gets older he'll come to learn that physical limitations are not so very important. It's better to have an exhausted auntie that loves him than an auntie who is in robust health but has never found time to get to know him because she's so busy pursuing a high powered career or backpacking in Nepal :P

I saw my only uncle today for the first time in two years. After an hour of awkward small talk in which he showed no interest in me or my life, he addressed me by the wrong name and it transpired he thought I was my sister. he's someone with such a self-absorbed lifestyle that i've never formed any sort of relationship with him at all, which is a shame. So, definitely better a relative with physical limitations than one with emotional limitations :)

I remember when I first got sick, people saying things like "I guess you won't be having kids then" and the suchlike.

Happily the amount of time I've spent with Pip's Littlun has reassured me that it's okay. He's at the, ahem, 'boisterous' end of the scale, but even so I can manage him by myself - he understands the difference between Mary playing, and Mary giving an Instruction That Shall Be Obeyed Upon The Instant.

He also loves to help out with things. I mean seriously loves. Anything from fetching everyone's shoes when it's time to go out, to piling groceries from the trolley onto the checkout belt (although it's important to grab the eggs first).

Radio - You're right. Even my Mum, who is Alex's number one fan, describes him as a rich fruit cake; completely delicious, but overwhelming in large quantities.

And whilst personally I have lots of uncles and aunts, only few of them have shown a great deal of interest or made an influence on my life.

Mary - I must say that spending time with Alex has shown me that there is no way I could have children of my own. Fortunately, I don't want to, but I guess this was another factor in my gloom; at this point I can't look after him by myself for more than a few minutes. The rest of the family suggested I give him a bath, as he loves baths and that's great fun, but I would be anxious about my own ability to keep him safe in a few inches of water.

I think I will cope better as he gets older and is less vulnerable. And I do know that if that was something Ｉwanted, like yourself, there are ways around pretty much any obstacle. You will make a smashing mother, whatever.

Kids just need to know you care. They actually thrive on simple love.

Well this rings many bells because when our son was born I was well and within 18 months of our daughter being born I wasn't well and never have been since. My daughter cannot remember a time when I was like other people and I don't think my son can either.

I've been through all the 'shoulds' and 'oughts' and realized they are just fabrications: no parent is how she/he 'ought' to be. You are just as you are and as long as you love your children and show your love and do your best, that's all you can do. In the end I have had to make adjustments and there are things I cannot do because of how I am but, on the other hand I make the best of the way things are too --- e.g. I'm at home much more than many parents nowadays [well, lets be honest, I'm home all the time ! ;0) ] and I have the time to do all sorts of things with and for them.

When my daughter was tiny I found all sorts of ways of getting round the difficulties of illness yet still providing (I hope) good care of her and providing fun. I just had to be nore creative and think outside the box and not simply rely on the TV as a minder (though, admittedly, sometimes the TV was useful). That's what you were learning with Alex.

The other day I read comments from two people, both with the same chronic condition. One had become ill at age 40, been married, had a career, had children and lost the lot because of the illness. The other had been ill since age 16 and was berating the former for being better off than him because 'at least you had all those things and I never will'. Although the bitterness and frustration of the younger commentator was understandable I cannot personally see that there is anything to be gained from 'comparing misery' and trying to score points.

In the end you have to make the best of what you have and you are a shining example of that --- whether it's in your creativity or in forging relationships with bloggers or loved ones and the children around you. It's lovely to see you enjoying Alex and vice versa

i think alex knows his auntie loves him very much... and any time you can spend with him will be remembered throughout his life. this is a great blog post, thanks for sharing!

Thank you very much Diane, Cusp and Naomi

Cusp - I think you're very right about age and getting ill. Sometimes older people have said they imagine it was particularly hard for me, whereas I actually kind of imagine it was easier; I was still very much in full-time learning mode, still very adaptable. I think there were unique challenges to illness and disability in one's teens, but there are another set of unique challenges in any other given decade...

Small children are exhausting on a good day! I have heard it said that if their energy could be harnessed, it would be able to light up a city! So not being able to keep up with them is baseline for everyone-- what is important which is the thread through all the postings-- is the love, time and connectedness you have with him.

He will always know your name, and have funny stories of fond memories with Auntie.

And at the end of the day, that is all that anyone wants.

A lovely, wise post. I lost a year or so of my son's childhood by getting lost in the grief of losing his childhood, as I saw it then...rather than living in the here and now as I try to do these days.