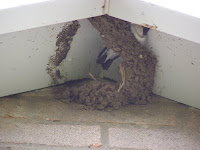 The house martin nest built in the apex of our roof collapsed today under the weight of the chubby little house martin chicks. It is as yet unclear as to whether this disaster is the result of shoddy workmanship or rising obesity among house martins.

One of the chicks is staying balanced inside the ruined nest. There are a couple of chicks on a nearby rooftop who apparently managed to fly to safety. 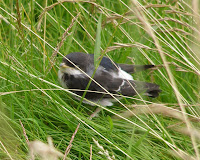 But one young House Martin was found on the grass. We haven't cut our grass this year so there is quite a lot of cover, but it was still an apparently flightless black and white bird on the ground surrounded by green. It had to be rescued!

Fortunately, you may remember that we have six chronically unoccupied bird-houses, so [...] picked up the bird and delivered it to the safety of the top of this house. Concerned it would need shelter later on, he then enlarged the hole in another bird-house, one with more of a ledge, placed dry grass in it and transferred the infant. 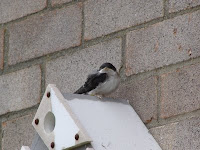 But would parent birds feed their chicks when they are in two different places? We watched and waited. The baby bird went into his new shelter, and soon enough the parent came to visit it. The united parent and chick had a prolonged conversation, after which the youngster flew all the way up to our rooftop.

So it could fly after all. And the birds could probably have sorted themselves out without our intervention. However, after flying all the way from Africa, all the weeks it took those martins to build that nest and all the months that they've been feeding those chicks, we could hardly stand by and watch the young bird get gobbled by a cat.
Posted by The Goldfish at 12:36 PM

We had a rather tragic incident in our garden this year when we had someone in to prune one of the conifers. We had no idea that there was a nest in it, and the workman didn't realise until it was too late, with the result that two baby pigeons bit the dust :'(

A happy ending and glad to see the bird-houses played their part. I put money on them being occupied next year.
Ralph is in disgrace having eaten an entire sparrow yesterday. I feel torn as a wildlife lover and cat person. I do hate it when he does that cat thing. I still haven't forgiven him for the robin. Shame on him. Nature lovers say you should overfeed your cat to stop the hunting instinct. I disagree. But it's still guilt-inducing when they catch something.

My in-head TV is playing a wonderful sitcom with Mrs Martin looking at all the beautiful birdboxes with an acquisitive gleam in her eye and making comments about the fabulous neighbourhood, and Mr Martin (quite possibly with a Yorkshire accent) saying nests were always good enough for his family, of course he can build a good sturdy nest, better and stronger than any of this new-fangled rubbish...

Ya did a good thing there Goldy- that is so heartwarming! Seahorse- that's why we love cats isn't it- 'cause they are so close to the wild. Nature is not kind but some people are thankfully.