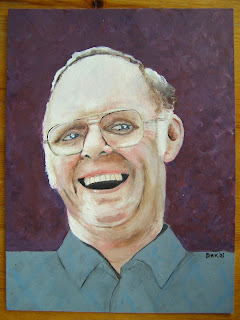 This was by far the hardest portrait I've done so far. It is my maternal Granddad, who died ten years ago in February. On top of his shocking failure to visit me as a ghost, I only had very small photos to work from. And well, let's just say that Granddad had a compulsion to pull faces whenever he saw a camera, leaving very few photographs of anything like an ordinary smile.

Added to this, I really miss my Granddad and became rather emotional about the whole thing, afraid that I had forgotten what he looked like. Even now I don't think this is a brilliant likeness, but I hope I've finally got the gist of him.

Granddad W. was a very special person, who I always hoped I took after to some extent. He was an avid reader, the only blood relative who could beat me at Scrabble and the writer of the most appalling that you ever read. And he was always making things, building houses out of brick (which was his job) or making furniture or little curiosities out of wood. Our garden alone boasted a hutch and a run for our guinea-pigs, a bird-table and a bench that he'd made. He always smelt of sawdust and pipe tobacco. I don't, but I feel I share his inability to sit still. Metaphorically at least; I actually sit still a great deal of the time, but perhaps you know what I mean. 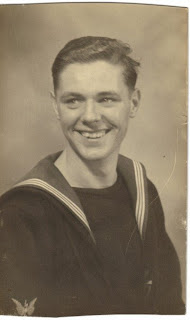 But then when I was talking to my sister about this portrait, she sent me a photograph of Granddad when he was in the Navy, aged about seventeen or eighteen. And to my complete amazement, well, he looks like me. If I were ten years younger and less chubby. Oh and much more butch. I hadn't previously seen myself so vividly in anyone before and it came as quite a shock.

One the one hand, Granddad taught me that it was possible to love and respect a person without taking them altogether seriously. People are daft, and they can make you daft if you take every word to heart. Family feuds raged around him, but he managed to appear not to notice (our particular family feuds are especially petty).

On the other hand, Granddad always seemed to take me as seriously as he took anyone else; he always knew what was going on in my life, not just in a general way. He encouraged all my interests, and whilst I was a naïve and opinionated teenager, he would chastise my parents for interrupting me or telling me to shut up. He also took the p*ss out of my parents, which was an absolute joy for my teenaged self. And yes, this was the Grandad who insisted that I would be the next female prime-minister. I presume he took a similar interest in all ten of his grandchildren.

And I really do miss him. I'm sure he would have adored little Alexander (as well as all the other great-children that have come along since he died). If everyone lived forever, the world would be a terribly crowded place, life and love would be less precious, but a time-machine would be handy from time to time.
Posted by The Goldfish at 12:27 PM

There's a real sparkle there you've captured very well, and if you've captured that ten years on then I reckon he is still very much alive in your memory. What a great relationship you describe with him. The upside to missing someone special is that you can miss them and smile.

What a handsome, good spirited looking guy. I loved my granpa for the same reasons. Memories keep them near us forever. Genes, amazing, huh?

What a beautiful post! I'll go so far as to say (without getting too sloppy) that this is the kind of post that blogs were invented for.

A celebration of life, love and a place to archive our memories of the past.

I believe I am correct in saying that an American Indian belief states that the departed have a life after death so long as someone remembers them.

And, even I, am remembering Granddad W. What a handsome fella!

A time machine would indeed be pretty cool; I'd love to be able to take my boyfriend to meet my Granda as I think he's the one member of my family who would instantly like him :)

Your portraits are beautiful - I'm in awe of artistic ppl!

"And yes, this was the Grandad who insisted that I would be the next female prime-minister."

What an adorable guy! Thank you so much for sharing him with us. And though obviously I only know him through you, both what you've said and who you are, it looks like you captured his spirit beautifully. What else would he be but laughing?

(Speaking as someone who looks like her father in a fat suit, my own personal view is that family resemblance is a mixed blessing...)

Thanks everyone, I very much appreciate your kind comments. :-)

People dont post quite as well as those nostalgic photos