I'm writing this on my new computer! You may remember talk of a new computer about one year ago. Well, I finally got one. It is not a MacBook. In fact I had the following exchange with my sister's friend who became interested in our conversation:

“Is it a Mac?”
“No,” I say, “It's made by a company called Asus and it runs on Linux.”
“What the hell is Linux?” he demands.
“Linux is a family of open-source operating systems, named after the programmer Linus Torvaldes who was Finish or Swedish, or possibly a Peanuts character.”
“Oh,” he says, disdainfully, “Well if it's not a Mac...”
“Basically, Linux is what all the cool kids are using now.”
A shriek. “What?!”
“I'm afraid so.”
“But everyone in Starbucks has MacBooks!”
“Exactly.”

It is true that all the grooviest people are using Linux, at least my homies Vic and Mr Bunny are and they are two of the hippest cats I know. If you imagine those Mac adverts with Robert Webb representing Apple, David Mitchell representing Microsoft (although in fairness he doesn't), well if Linux was to be represented, it would be by Jimi Hendrix walking on and doing something like this. But since David Mitchell really represented all PCs, I guess my new computer is David Mitchell - but come on, he's the one we all fancy if we're honest with ourselves.

Of courseＩwas far more concerned about the fact that it was the cheapest, lightest most shock-proof computer I could find with a word-processor and a wireless card. And the most exciting bit is the aforementioned word-processor which actually saves to disk and I can use the same machine to go on-line. Otherwise I just have the guilt that tends to accompany new toys, which I have to combat with the knowledge that it's re 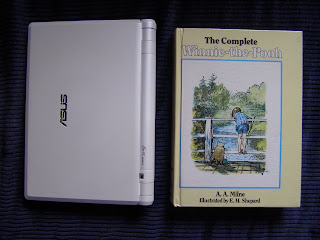 ally a new tool and one I've been struggling without for a long time.

It is very diddy, about the same size as The Complete Winnie-the-Pooh, so a bit bigger than a bible but smaller than a dictionary. As a result, the small keyboard takes some getting used to, but I would say I have average dexterity and I've just about got the hang of it (it's not like one of those raspberry devices where you have to cut your fingernails to a point to hit one key at a time). And it works. And it saves files to disk. Amazing!
Posted by The Goldfish at 3:53 PM

Oh they're reeeeeaaaaaaaallllly cool. I was going to get my daughter one for her birthday but she wanted a full size laptop so ended up getting an Acer. I'll be interested to knowhow you get on with your new Eee.

Until I read this, it hadn't occurred to me that the Mac vs. PC ads would have a different pair of men representing the two outside the US--d'oh! Thanks, I had fun watching the different ads. (BTW, the US ads feature John Hodgman and Justin Long, shouldn't be hard to find on YouTube.)

(psst... your Jimmy Hendrix link goes to the same Mac/PC advert as the Mitchell and Webb one.)

I envy your shiny new technology.

I do not have Linux or Mac envy. I'm good with what I have, which was free to me because my true love paid for it. The really best thing about it is that it runs all the expensive design software I already own and can't afford to replace.

A sample of the ads Penny is talking about can be found here:

I am so unhip that I didn't know the name of the guy who isn't John Hodgman, so thanks, Penny.

I know Hodgman from the Little Gray Books lecture series (old podcasts here), and I only know of those because I am a tremendous public radio geek. Now, of course, he's famous and even on The Daily Show but somehow not quite as funny to my mind.

I think it is hysterically funny that Mac is running exactly the same campaign only with local talent in other countries.

Well I have been extremely puzzled. I have seen very small bibles and very big ones. And dictionaries. And what's really been bothering me is how big is the Complete Winnie-the-Pooh? This is the problem when you don't keep up with technological progress. I gather it's small but not impossible to use. Which sounds very cool indeed.

Penny + Sara, now you mention it, I had seen the other Mac ads on the commercials they put on the top of rental movies and the like. There's also a parody in the style of South Park where the two characters get nasty with one another. (In fact the creators of that one also did one including Linux)

Now I'm imagining all sorts of versions of the Mac adverts performed by pairs of men in national costume through the world. I did look but I only found badly dubbed versions of the US ones for other European countries...

Sara, if you say those podcasts are worth checking out, I shall probably get hooked.

Seahorse, that's about the size of it (boom boom). How about three DVD boxes in a pile? Except heavier than that. The fact you don't know how big The Complete Winnie the Pooh is suggests you might not possess one, which is just plain odd. ;-)

Actually (she said airily) I have an AA Milne box set. Now that would be just plain daft computer-shaped. Bit like the good old days of brick-shaped mobile phones. No, three DVD boxes in a pile sounds just dinky.

Woohoo for mini laptop :-). I guess if one found the keyboard a problem one could always plug in a full size.

And thank you for the "hip cat" - the first, and I suspect last,time I will be described as such. Though I notice it's in connection with something pretty geeky. I'm not sure how far being a "hip cat" would get me with da yoof either!

What flavour of linux are you using? It's definitely the future - Dell are releasing Ubuntu on machines - the CEO is even using it on his own laptop.

Good luck! Any problems linux wise (or rather Ubuntu wise) give me a shout.

And I must confess I do fancy David Mitchell more than Robert Webb (who's married anyway).

Oh, and if anyone reading this likes The Daily Show, check out The Bugle podcast

Two weeks later are you still loving it? Any teething problems?

Or is it even better the more familar you become with it?

I'm still laptop-less and still a slave to the PC and Windows Vista [shudder]... but I'm secretly and subtly gathering information and considering jumping the fence...