Today was my Mum's birthday. She is apparently now 39, which is pretty impressive for someone born in 1953. I did finish making her present, which I forgot to photograph but [...] responded to my suggestion that I might be up to baking a cake this week with some rather strong language. Good job too, as this meant that Rosemary had to improvise something and thus... 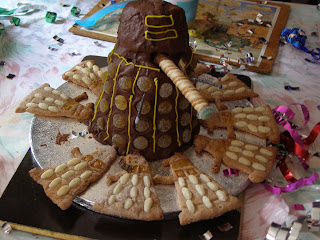 A Dalek Cake! And partly through the power of blogging. See, Lady Bracknell's Editor wrote about her cake-decorating and Jess wrote a comment giving a link to the Flickr pool of Dalek Cakes, which really is... something. Mum has always a had a thing about Daleks; the very first film she took us to see at the cinema was Doctor Who and the Daleks when it was being shown at the Ipswich Film Theatre (which shows old films, foreign-language films and very rude films of unquestionable artistic merit which can't go on at the normal cinema - Doctor Who and the Daleks came into the old category, in case anyone wasn't sure). So it was a very appropriate theme for Mum's birthday cake, but one Rosie might not have thought of if it wasn't for me ol' blogpals.

And as you can see, it is more than up to standard to join the photo pool. The accompanying biscuits were made using a Dalek Biscuit Kit available at Sainsbury's.

We all sang Happy Birthday in the style of Daleks (instead of doing the "Hip hip hooray!" at the end, you have to break into "Exterminate!") and then we, well, exterminated it. And very nice it was too. At one point it had sparklers attached but they had kind of sparkled out before I had the chance to take the photo. 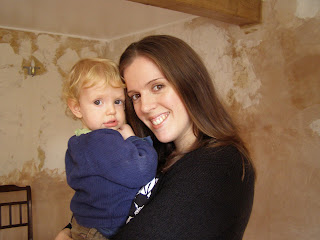 I tried to take a photo of Alex with my mother, his Superbat, but they were all blurred, so you get Alex and his Mummy instead. Alexander was fine; his current obsession is talking on the phone. Only anything will do as a phone, which he will put up to his ear and babble at. His preference is for a real phone, which makes noises when you press the buttons on it, but a shoe-horn is apparently an adequate substitute.

Rosie has recently started giving music lessons for a few hours once a week during which he stays with a child-minder, and perhaps as a result, or perhaps as a complete coincidence because that's where he is in his development, he has entered that phase where he gets really upset when she goes away, even just out of the room. But all babies go through this and I've seen much worse (rephrase; I have been subjected to much worse as a teenaged babysitter).

First time I've been out of the house in weeks and weeks, so that was nice too.
Posted by The Goldfish at 5:52 PM

Email ThisBlogThis!Share to TwitterShare to FacebookShare to Pinterest
Labels: Cooing, Events, General Nonsense, Getting Out

Daleks taking over the world in cake form...not even the scriptwriters saw that one coming.

That is fantastic. (No Ninth-Doctor-reference intended, but, whoops, there it is, innit.) Mmm, chocolate Dalekanium panels.

That is an awesome looking plate, most worthy of extermination. But thank goodness you took pictures first!

I wonder why Dr. Who never thought of simply eating the Daleks? Okay, they don't respond to guns and whatnot. But did anyone ever try sneaking up on one and biting it?

I'm astonished that a blog post of mine has led - in a very twisty-turny way - to a cake actually being produced.

Ought I, perhaps, to be more careful what I write about?

Are bookmarks disappearing from houses across the UK as we speak?

Or - even more worrying - are the good citizens of Blighty all simultaneously looking at their washing-up liquid bottles and thinking, "Now, what that needs is a natty little apron"...?

Well that's a cake that gets my vote! Too funny about the phone, luckily we don't have to cope with anything so 'dangerous.'
Best wishes

Come and pick up your award!
Cheers

Great cake and the biscuits look even better. Very impressed

Anything that surreal has to be good - I just wanted to sing Happy birthday...exterminate! with you. Glad it was a day out.