Purge me with hyssop, and I shall be clean. 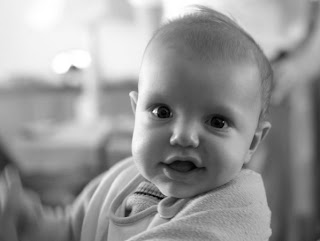 Alexander is very sweet, but he can't be the star of the show all the time. This week the star is his Mummy, who sang the fantastic scary high bit in this, Allegri's Miserere at the Winchester Cathedral Ash Wednesday Service, which you absolutely must listen to. You can also listen to the rest of the music at the service here.

Still, that was a vague excuse to post another picture of Alex, wasn't it? I mean, it has been a while.

Meanwhile, I have purple puffy cut knees having tripped over in a spectacular fashion onto one of the carpetless floors. I did cry, not because it hurt, but because I was carrying a slice of toast, the first slice of toast out of three I had managed not to burn, upon which was spread the last of the Marmite. And I was so hungry. And naturally the plate smashed and the toast went everywhere. As I was mopping up my tears, [...] said, "I'm sorry; if I had realised you were likely to trip over that, I would have set the camera up." Hmm.
Posted by The Goldfish at 11:19 AM

Thanks very much for those links, Goldfish - that was fantastic.

Was that really your sis singing?

Yes it was and brother-in-law conducting. I thought it was ace, especially as R hasn't had a lot of practice in recent months besides singing lullabies to Alex.

WOW! THat is a seriously good choir and your sister really did the business with that top note, which was why I tuned in. Amazing. I was in a university choir which toured Europe and this brought back many happy memories. Singing in a cathedral makes the hairs stand up on your arms and neck (ooh there she goes again - your sis with that spiritual high, got it on in background). Religious or not, there are few more pure experiences. Wow she has a lovely voice. I'm a mezzo so tend to grub about nearer Top A, C at a push but never that reliably.

Can't listen to stuff right now, but the toast thing had me laughing (only because I've been there). Hope you got some toast eventually.

The singing was wonderful! the whole coir is really remarkably good.
Sorry about the toast. What a waste of Marmite ;-)

Aw - I was finishing off a white finger roll spread with Marmite when I read that post! So I'm glad it wasn't me it happened to. Tasted goooooood...

Great performance, thanks for the pointer. I hope someone gave those people who were shuffling around and making a noise a good clip round the ear.

Off-topic: can we assume that BADD is happening again this year?

The shuffling round was part of the service - most of the talking you can hear is the Dean of Winchester! Thanks for all the nice comments. I'll pass them on to the choir ;-)