I've got a glorious feeling...

My letter may have worked. In the last 24 hours... 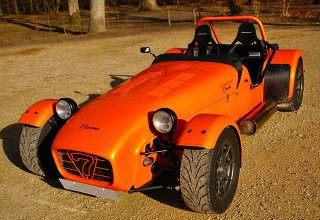 1. The car has been brought back to life by a spectacularly moustachioed man from the RAC. He had been to my folks' house before - last time to fix the Caterham which brother-in-law was driving. Here is a picture of a Caterham. -->

The ancient rusting Proton was probably a bit of a let down after that, but it lives to see another day.

2. The broken pipe is mended.

3. The chap has come, checked and serviced the boiler. This in combination with 2. mean that we now have heat and hot water. And fortunately it is all coming out of taps as opposed to the ceiling. Which is a plus.

4. The missing mobile phone has been found.

5. The house has working broadband. We imagined this would take weeks to set up, but it's there right now.

6. The fish appear have survived all the stress of the move, the changing temperatures, changing water conditions and all and are now swimming happily about in my Dad's pond. Yesterday the blackmoors skulked at the edge of the pond, the goldfish eying up these exotic incomers with suspicion. But today they all appear to be friends. Ebony and orangey...

They have been through a lot though - and I really am genuinely surprised they have survived. Of course, they need a few weeks before we can consider them safe. And they are now somewhat more vulnerable natural predators, like herons, than they were in the tank.

Anyway, it all seems to be going very well. We've half a mind that we might move into the house at the weekend, even if we won't have any electric lights, a kitchen ceiling or any means with which to cook. The kettle is working okay, apparently, so what else do we really need?
Posted by The Goldfish at 4:43 PM

I'm so glad to hear things are perking up again.

Personally, I would take advantage of having the parents' house available while they are on holiday, and take my time sorting out the "moving in" stuff. Particularly with regard to cooking and eating proper meals - man cannot live by Pot Noodle alone.

My boyfriend when I first got sick drove a Caterham. We took it as proof there was definitely something wrong with me when I fell asleep in it on the 30-minute journey back to mine from Norwich.

I think you've made the right decision re staying with your parents rather than throw yourselves at the mercy of the random whimsy of state officials.
This CAN and will all be sorted in time. I do agree with Vic though about getting electrics, drying out and bigger jobs done for you. And I also wonder if a phone round some advice lines (vague I know) may bear fruit. I got some top advice today, and it was from the local council. Wonders will never cease.

Sounds much better than a few days ago. Not being able to cook can be a nuisance. I remember I had to live on chinese take away for a while and felt sick and tired of it sooner than I expected. I hope the remaining problems will be solved soon.

I agree with the previous posters. Having had to move into this cottage during refurbishment (because our then landlord wouldn't agree to monthly extensions on the lease, the bastard) I know just how bonedeep cold and damp a building can be which has stood empty through a winter - and that was without a flooded pipe!

Being without cooking facilities is no fun, either, once you get fed up of takeaways and cold meals.

Moreover, the replastering job will be messy. If either of you have any tendency to respiratory problems, try not to be there while they are doing it. I know. I had to have my whole ground floor walls replastered.

Oh a Caterham as in Miss Haversham? (see link if confused, though you might have to "dig":-))

Have sent you email - so would be grateful if you vould let me know if you've got it (or not!) :-)

Wonderful that the universe is at last turning in the right direction, but I endorse all above: please stay away, dry warm and safe from damp induced health problems, until it is all finished !

Fish: Does planting a plastic heron on the side of the pond deter the predatory ones ?
I heard yesterday of a Japanese Vet who specialises in fish. As the coy (?)carp are renowned for being expensive and high maintenance, apparently he has a thriving practice and can diagnose reasons for loss of colour and even carries out operations. How ?! Think about it.

Don't forget that the electrics will probably all be via the loft - so it all needs to be checked first.

Also (I'm afraid it's a biggy), we've just remember from our mini-flood that the carpets were ripped up so the floors could dry out, so that it didn't affect the substructure. So, again you're landlady really needs to get that checked.

Thanks everyone and for all your advice. We're going to play it by ear this weekend, see how it goes.

I will keep a good thought out for you in your transition to the new home.

And I agree with you and the tea kettle-- I tell my children that tea cures most illnesses and woes!!

P.S. I can't find the orginal post, so thank you so much for the Four Yorkshiremen hyperlink! You made a very difficult week bearable!