Care in the Community

Feeling guilty that I might neglect the second Disability Blog Carnival in a row, I feel compelled to recount a wee bit of disability history. 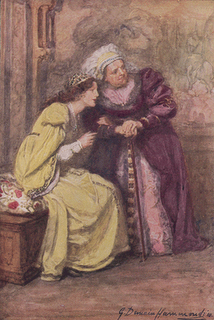 Mary and Charles Lamb are famous for writing Tales from Shakespeare; the stories of the main Shakespeare plays written as prose suitable for young readers. Even though these were written in the early nineteenth century, many of us grew up with that book and it remains an important teaching tool today. For example, when I sat my English GCSE, I attended a few sessions with the mature group who were retaking the course having previously failed it (in some cases, more than once). Since the objective was to get everyone to pass by whatever means, the students were asked to read the story of Macbeth from Tales and then study just the one short passages from the play itself.

Both the authors, who were brother and sister, experienced mental ill health. Charles also had a speech impediment, as it happens. And in 1796, Mary experienced an episode during which she stabbed her mother to death. I’m sure it was all very dramatic and tragic with lots of blood and cries of anguish, but boring as I am, I’m more concerned with what happened next.

It was pretty fortunate timing. A few years later, in 1800, a man fired a gun in the general direction of King George III at the Theatre Royal. In fairness, it was during the national anthem - our national anthem can be very irritating - and this chap, a former soldier called James Hadfield, had previously bashed over the head several times with a French sabre, resulting in significant brain injury. Having missed – or perhaps not having meant to shoot the king at all – he declared his affection and loyalty to the monarch before being arrested and tried for High Treason.

Both Mary Lamb and James Hadfield were acquitted of any crime on the grounds of insanity. Mary was released into the custody of her brother Charles who guaranteed that she would be looked after and would never hurt anyone else. Mary almost certainly had manic depression and as such, went on to have further episodes of severe mental illness, including periods in the asylum, but otherwise had a full and apparently happy life writing books and rubbing shoulders with other notables of the Romantic Literary Movement.

James Hadfield, who hadn’t killed anybody, was less fortunate. The idea that one would let a man who had shot at the king roam free was politically unacceptable, however unwell he had been at the time. In response, the government passed the 1800 Criminal Lunatics Act, which meant that anyone who was acquitted of a felony on the grounds of insanity would remain incarcerated in an asylum, usually for life. And indeed Hadfield was to spend the rest of his life (less a brief escape) in Bethlem Royal Hospital.

The reason I think this is an interesting story is because it marks the beginning of a significant change in our cultural attitudes to mental ill health and the danger of violence (although this wasn't the only change taking place at the time). I'm not sure any profound conclusions can be drawn from it, but I guess it is a small piece of the puzzle of our history.

Do you have any idea how many times that, having published this, I then noticed some little typo or other and had to edit it again? The answer is many. I'm back off to bed.
Posted by The Goldfish at 12:36 PM

As someone who knows shamefully little about mental health, I found this post (and, indeed others you have written) very informative.

It just goes to show
(a) that public/media pressure affecting judicial procedure is nothing new.
(b) It takes a long time for things to change. A personal example being over 100 years on from these, my great-grandmother was kept in a "mental hospital" (as I suspect it would have been called) for most of the second half of her life due to post-natal depression. We believe she hardly saw her children (them being very young when she was admitted) and didn't see her grandchildren.

I would be interested to know the relative wealth/social status of the Lambs and Hadfield.

I think it is safe to assume that the Lambs, being able to read and write and being part of the literary set, were decidedly middle-class, whereas Hadfield was a soldier and they don't know exactly when he was born, so I imagine he wasn't terribly well educated and wouldn't have had many friends in very high places.

You know, I can't say often enough how much I love reading your blog! It's enjoyable on so many levels.

Thanks so much for putting it out there!

we need these type of musings in mainstream media as negative attitudes to mental are more entrenched than ever.Maybe social class should be considered atype of discriminationin the 21st century?