Living is easy with eyes closed

Having a run of crappy days, which is great timing when I’m off in less than a fortnight. When not asleep, I am not worrying about the move; everything seems to be going all right. Unfortunately my imp is instead bothering me with all sorts of unrelated and frankly paranoid concerns. Which I guess is projection, but frankly I would rather be worried about paperwork, packing and general stuff than the bizarre fantasies about my having upset and offended everybody I have ever met, all sorts of bad things happening to people I love and similar nonsense. Some of the scenarios it has managed to convince me of in the last few days - such imagination - it ought to be writing books! 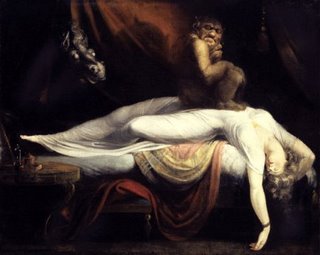 I know this happens because I am extremely tired, sleeping sleep that isn’t vaguely refreshing and generally very frustrated. I am particularly pissed off because I think this was my fault. On Saturday I got a little woozy. It was an accident, I rarely drink and when I do, I do so in very small quantities. But suddenly I realised I had crossed that line. After a somewhat horizontal performance of The Timewarp, I got a little nervous and proceeded to drink two pints of water. Which may, in itself, have been a mistake.

But no, I reject the possibility of a four day hangover. I haven't even had a headache. It is just that last week I was doing really well, so I am really very cross and wanting answers. I need to be better at the moment. And naturally, inevitably, I am now shit-scared that I’m having a turn for the worse. But that's not happened for ages now; I will be much better in a few days.
Posted by The Goldfish at 12:47 PM

Goldfish, I really hope you will have better days soon! And don't be cross, it doesn't help anyway.

I expect it's the stress of the move kicking in, underneath. Removing house is right up there with death and divorce as the top stress-inducers in life. As Bloggingmone says, try not to start quarreling with yourself.

Have you ever tried Bach Flower Remedy for stress? Works wonders on cats.

last week I went through similar feelings. After I lost my dad in October that was the first time I went trough depression. Suddenly fear came upon me - all sorts of what if I....

You can get over it. Post more here. Read other's blog. Keep yourself very busy in things that is not your daily routine or occupation. Meet people. go out. If you believe, try - prayer, bible, church...

(((hugs))). Is it worth seeing if you can take something like Herbal Nytol for a month of so to get you over the move?

I should explain that it is my physical health which has taken a turn, and my emotions following in dramatic fashion. I have been sleeping most hours of the day and able to do very little in between times.

Trouble is that when you're extraordinarily tired you become like an emotional sponge. As with a properly drunk person, you can get hysterically happy at times, but if what's going on in your life is at all stressful, then you can become deeply miserable. And because you can't keep busy, most of the time you're lying down and close to sleep, it is very difficult to lift your mood.

I already feel much happier because I've improved to a level where I can at least listen to the radio or watch telly for periods of time. And obviously, type a little. So I really should feel miles better soon, and cope with whatever's coming, just as soon as I get over whatever has set me back physically. :-)

The connection between physical and emotional health is always a hard one. Hang in there. Give your body what ever it needs, nurture your mind and spirit.

Hey, that's the scary painting from Buffy the Vampire Slayer!

take good care of yourself. You just moved house -- and location in the country. Every thing's different.