Music To Watch Patients By

Yesterday I went to the doctors. Our practice covers the entire population of the town and is in a large modern building. They play music in the waiting room, usually inoffensive pap – “The Pan-pipers of the Eastern Andes play… Songs from The Musicals.” type stuff. It was mid afternoon on a weekday and my fellow patients were mostly elderly or exhausted-looking mothers with children, everyone slumped and looking miserable, some dribbling a little in the heat.

And suddenly they’re playing Manamana (a.k.a Phenomenon) by the Muppets! 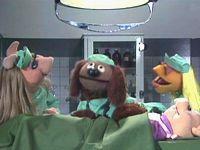 Nobody responds. Nobody looks up. I had been beginning to drift off before that point and wondered whether it was just me with the Muppets playing inside my head.

Then Manamana finished and on came The Theme from Hawaii 5-O. You know the one. Still everybody sat slumped, gradually sliding off their chairs at a rate of an inch every minute or so such that you thought they were moving but you couldn’t be quite sure.

A boy who looked about eleven or twelve, attending with his mother got up to have a cigarette outside. His mother complied with this, agreeing to knock on the window if they were called in. The kid then stood smoking right outside the open doors so we all got to inhale anyway.

The local muscle-man came in and sat right next to me. I have never spoken to the chap but you can’t help but notice him around. He is really extremely muscular, like Vin Diesel or someone - way too much for my tastes - but he always wears skin-tight jeans and t-shirts tucked into them, the fabric stretching across his chest such that you can see his nipples. I imagine it is very hard work looking like that and good luck to him, but when the guy plants himself next you to, you don’t really know where to look. Fortunately I was then called in.

Doctor put me onto a yet stronger lot of painkillers and I requested to see a physiotherapist, just to talk about ways in which I might be able to keep my muscles working without making them worse. The doctor called me “Young Lady” which amused me. I guess he was a bit worried about the state I had been in last week. He asked me whether the dizziness had improved and I had to tell him that dizziness is par for the course.

When I came out into the waiting room they were playing The Theme From Shaft and still no signs of life from my fellow patients. I do wonder sometimes whether there is a zombie plague taking over the world and most people have already sucumbed.

I'm sorry, but if I was there and Manamana came on I wouldn't be able to not sing-along with it.

What wierd songs to play in a doctor's waiting room?
At ours they have the tiniest sounds of classical music playing in there.
I wouldn't like it if they played that sort of music, wouldn't it make the patients all fired up to leave?

I think it's something they pump into the atmosphere in doctors waiting rooms - it just sends you catatonic. As soon as I walk in I just stare straight ahead like everyone else, lost, lost, until somebody barks my name.
Regards, Wyndham

Wyndham said...
This comment has been removed by a blog administrator.
9:22 AM

this isn't relevant, i just wanted to ask if goldfish has heard James Blunt's cover of Fall at Your Feet, cos yknow, she likes crowded house i seem to recall. its quite good actually, low key, just a guitar.

obviously not just a guitar. that would be silly. a guitar and james blunt. i'm not a fan btw it's a single belonging to Spawn of Googlespack.

Now I can't get that song out of my head Goldfish!
hehehe, thanks for putting a smile on my face and making me tap my feet, we sort of a limpy, gimpy tap (damn feet) but oh well :)
I have developed a bit of a neurosis surrounding classical music over the years and am convinced that it is from hearing it so much in doctor's offices. I hear classical and get a panic attack, so Manamana would be a vast improvement for my docs office!

Thanks guys for your comments.

Turtle - James Blunt, no but I am trying to download it from Tesco as I write. I'll let you know what I think.

Mumpy - Panic Attacks provoked by classical music. It's not Beethoven's 9th by any mischance?!!

failing that i can email it you, it's a CD rip not itunes so it should work for you.

I went for a brain scan once and Trisha was being shown on the TV in the waiting room. I'm sure my scan must have provided final proof of its ability to numb minds.