The most fun thing about decorating projects is the language used to advertise products and services. After all, most of us are ordinary people living in ordinary homes. Most of us are neither artists nor artisans, most of us are working with fairly unyielding budgets and practical limitations. It fascinates me with places like Ikea that draw your attention to really original funky pieces of design only to sell you the very ordinary and inoffensive bits and pieces which actually fit in your home. 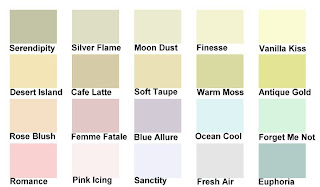 Of course, advertisers don’t want to remind you of the reality of the situation. They want you to think that this is a great opportunity for self-expression, that you are buying into an image, a lifestyle. The very word lifestyle has shifted in meaning from the style in which you live your life to the style of the surfaces upon which you live your life. A new language of magnificent hyperbole has grown up around this.

And it is so very seductive; here we are, patching up rented accomodation on somebody else's budget and even we are thinking, "Are these carpet tiles really us?"

My absolute favourite is the paint colours. In one colour chart this week (pretty sure it was Crown paint) I found a colour called Utopia. I’d like you to take a minute and consider what colour you think Utopia might have been. What do you reckon?

Beige. Really. The colour of farmyard mud that's dried on the chassis of a tractor.

But they do have this tremendous problem as, as I say, most people live in ordinary homes. For a lot of people, neutral colours are the most safe and practical option. Yet the illusion of choice is a seller, so you have to give them lots of shades of much of a muchness; Barley White, Magnolia, Buttermilk, Ivory. My sister once had to buy a tin of paint to patch up the wall of her rented house. She went to the DIY shop and asked for a tin of County Cream. The assistant looked this up on the database and insisted that there was no such colour. Then she pointed out that there was an O in County. 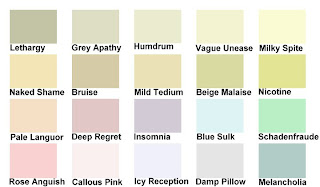 I like to go through the colour charts and make up my own names, especially for those colours which, though not unpleasant (not sure a colour can be unpleasant by itself), would certainly have an unpleasant effect if you had entirely rooms painted in that colour. She says, writing from a room painted in Ferrari Red (actually, there's a tin in the loft and it is Summer Pudding, but to me it is Ferrari Red, or possibly Scarlet Lake going off the corresponding Karisma pencil colour). But the red is quite liveable now we have furniture in here. Honest.

Anyway, my favourite example of decorating hyperbole this week though is not a paint colour, but a little sentence in an otherwise innocent, entirely sensible article. They’re not even trying to sell anything, it is just that this sort of language has become natural in discussing such things. I was looking to buy a lampshade frame, and on my search found some fairly wacky ideas of how to make your own lampshade. Then this, entirely sensible one. It begins

Nothing makes a more dramatic design statement than a pleated lampshade crafted from leftover wallpaper or border. 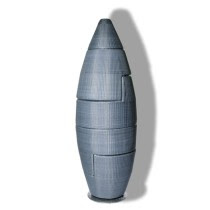 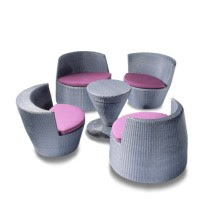 Anyway, on my on-line meanderings, I did come across one really appealing objet. The Obelisk. Which is an, um, obelisk, which turns into a table and four chairs.

If I had several grand to throw away, I would certain consider purchasing such an item.
Posted by The Goldfish at 9:28 AM

I wonder if having Vague Unease on my walls would cancel out having it in my life. If so, I'll take a gallon, please.

I have worked in many offices painted or papered in Mild Tedium. They were all law offices.

Haha, great post. For some reason, I tought that Euphoria turning into Melancholia was the funniest thing I have ever heard. Don't ask me why.

Does this mean the decorating effort is going well, or not? Or simply that you're getting distracted?

Personally I quite like magnolia. It's not exciting, I don't feel it represents me, god knows what effect it supposedly has on my mood/skin tone/etc. But it's nicer than an unpainted wall, much less hassle than spending hours with colour charts, and will be completely inoffensive to whoever lives here next.

Oh, and I have now spent two separate sessions of several minutes each staring at the Obelisk set and trying to figure out how it fits together...

I don't think I'd like it on the walls, but I'll have two scoops of schadenfreude please.

Wouldn't you expect Femme Fatale and Euphoria (and Utopia) to be more intense?

This post made me think of two movies: Fight Club for the Ikea reference (what you own ends up owning you), and Eternal Sunshine because she wants a job just naming hair-dye colours all day. "Somebody's got that job, Joel."

I love your colour chart renaming.

I have a sort of magnolia tinted by an undercoat of grey which is the most peaceful safe restful room in my house. Shame its the staircase.

I found a sweater in a catalog that I loved, in a beautiful burgundy. The catalog called it "sanguine". Sigh.

That obelisk is the coolest.

It always puzzles me the use of "taupe" for these buff colours.

Taupe is French for "mole" and while I concede it sounds fancier than "beige" I have never seen a mole in such shades.

The decorating is... Okay, so I have got distracted, but once again this is another job where I can be involved in the decision making stage and have little to offer on the practical side.

This was a v amusing read, and I wonder if you've seen Unreliable Witness's latest post on Shaggy Blog Stories? Although you won't (crying shame) be able to use your ingenious paint samples, I am sure there's something equally original and genuinely downright funny in your archives. Troubled Diva is co-ordinating the whole thing.