I surmise with my little blue eyes

After Monday’s post, I've been thinking about ancestors. The idea of some sort of social or cultural heritage tied up with our genes is one which amuses and interests me. It especially amuses me when people – often those with a basically xenophobic agenda – like to talk about being indigenous to the UK, or England specifically. As if any of us are.

Yet even I can succumb to a degree of fantasy about my own supposed genetic past. Talking about this with one Scottish friend, he said (I'll try to do the accent),

“Ach well, that’s the Celt in ye, lassie. Them Saxon Sassenachs see the past as something which is gone and irrelevant. Whereas us Celts see the past as inextricably linked with the present, the noo. History is a people's memory, and without a memory, man is demoted to the lower animals.”

Which I thought was Malcolm X, but perhaps Malcolm X had some Celt in him too; he was somewhat ginger. Actually, he did have reddish hair apparently (not evident from what photos and footage I’ve seen, but I read mention of it somewhere and added him to my list for Alexander, who seems to be heading in that direction). My limited understanding of genetics suggests that Malcolm X could not have got his gingerness from genes of European origin. However, he could well have had some Celt in him; he did have a white grandfather, and in any case, very many African American men carry a Y chromosome of European origin because of what is sanitarily described as the sexual dynamic of slavery. So Malcolm X could well have had some Celt in him.

Which kind of illustrates the nonsense of what my friend said. Whilst people and peoples do have a history and a heritage, it has very little to do with our blood, but rather who we are in this life, our social and political experiences and how they came about.

I don't know much about my family tree, but there are at least thirty different characters from whom I am directly descended, between me and the beginning of the twentieth century. By which point they are living lives quite different from mine, some in other countries and there is very little information about them. I know that many couldn’t sign their own name on the 1901 Census, leading to several different spellings of each of the relevant surnames.

However, like I say, I am very susceptible to fantasy. For example, I know at least one of my kin was a member of the IRA (freedom-fighters, unlike the Provisional IRA who were terrorists – important differential). He was executed for his troubles; I picture him as Cillian Murphy in The Wind that Shakes The Barley. Meanwhile, another of my kin was an Irish member of the British Army around the same time, who shot himself dead by accident (I fear this man is the character with whom I have most in common). And already at that point, those from whom I am directly descended had eloped to England because of a forbidden romance from either side of the political and religious divide. A story which I paint all shades of romantic in my mind.

My maternal grandmother’s family were Gypsies or Roma. The information surrounding this is rather messy, being conveyed as it is through my Gran, whose most frequent references to this heritage include the fact that her grandfather had an earring (well, I don’t suppose many chaps had earrings in the 1920s’ England, when she was growing up) and the fact that she is herself the victim of a jinx, a Gypsy Curse. My grandmother is not an especially unlucky person, but she has had some misfortune in her life, the greatest of which is an inability to appreciate what she’s got. However, she thinks she is jinxed. By the Gypsies from whom she is descended.

I like to think that there is actually a story behind this, that there was a curse that she was told about as a child. However, I suspect this was something my Gran made up. After all, I make things up about the Roma. Like about my blue eyes... 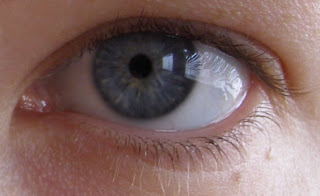 The Roma are originally refugees (a status resumed several times over, including in some parts of twenty-first century Europe, alas). They left India, the Punjab in fact, in the eleventh century and made their way across the Middle East and into Europe. A lot of the Roma traditional beliefs carry echos of Hinduism, although Europeans often mistook these for the occult, black magic or whatever. Thus my Gran and her jinx.

So anyway, I decide, I must have got my blue eyes from the Roma. Forget all that ubiquitous Celt; my eyes belong to India!

Gets better. Because of course our neighbours across the North Sea, the Vikings, were also very well travelled. We know they made it as far West North America and as far East as India. And it is speculated that it is the Scandinavians who settled there at this time who injected blue into the local pallet.

Thus my theory goes that my blue eyes are very well travelled. They went half way round the world and back over the course of 1300 years.

Whereas in reality, well, it really doesn't matter. In truth, my eyes have only been as far as I have which, possibly mirroring the passage of the relevant genes, is only as far as Ireland and back.

To celebrate my extraordinarily dilute Indian heritage, here is a song. Also, my proposal of what we need to do about the railways in this country. Bare in mind that at this point in the movie Dil Se, we know this particular train is eight hours late. Don’t you think we could cope with a forty-five minute delay if everybody had a good old singsong? Especially one the like of this.

Chaiyya Chaiyya by Sukhinder Singh and Sapna Awasthi (that's not them, this is Bollywood; the chap is actor Shah Rukh Khan, the lady is Malaika Arora).
Posted by The Goldfish at 1:50 PM

Has anyone ever told you that you've got very cute irises?

What about that schoolteacher in Somerset who proved to have the dame DNA as 3 000-year-old fossil bones discovered in the Cheddar Gorge? He must be indigenous!

Though mind you, given the usual treatment meted out to aboriginal peoples, he is probably wise to not make too much of it.

But imagine upstaging the Queen, for example: Who are these Johnny-come-latelys?

Unreliable, why thank you. ;-)

Charles, of course, the fossil in Cheddar Gorge accounted for just one of that school teacher's millions of ancestors. The rest of them may have come from anywhere else in the world. If they had happened to prove a relationship between the Cheddar Gorge fossil and someone living in Thailand, whose family going several generations back were entirely Thai...

I do not know much about my family tree either, but some of your theories made me curious. I did not know that blue eyes were that rare. I also have blue eyes, but dark brown hair and I am not exactly pale skinned. I am 3/4 German (well I guess...) and 1/8 Polish and 1/8 Dutch. Wonder what that reveals about me... I would love to find any jinxes or romantic legends in my family, too.

I know a bit too much about my family tree...records as far back as 1688 to a James Colburn from somewhere in the southernmost part of Ireland...

Then, businessmen and drunkards came to America in the 1740's all the way through to the present day....One of them, thought he was Daniel Boone and went around annoying his aquaintances with his coonskin cap and his omnipresent skinful of alchohol

But I like the small spare bits of something else...A great, great grandparent on each side was from France (or Quebec)