Occassionally, I get anonymous packages in the post. You may remember Albert, the cactus? He's still going strong, thanks for asking. Anyway, last week's mystery package from my oh-so-secret admirer* contained a book of short stories about sex and death, which is probably a favourite theme for books sent anonymously. 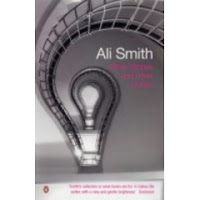 Actually, these stories were more about love and death.

We believed in the superiority of feeling, and we believed there had to be some superiority in everything we felt since we felt it so strongly in the face of such taken-for-granted shame.

I don't generally like short stories, particularly ones that clever people describe as postmodern (I actually saw Ali Smith described as Late Postmodern, which made me titter).

Short stories frustrate me because usually you're not given enough of characters to get really invested in them - and if you do, by the time you do, the story is over. Plus there are only so many things you can do with a few thousand words. Horror and ghost stories work best in this format because although the same sort of thing happens every time, the emotional response is so strong you don't really care. How many times have you read the one where Peter encounters Paul, who gives him the willies, and later Peter learns that Paul is a ghost? I've got shivers down my spine thinking about it (really I have; powers of imagination being much better than powers of description).

Postmodern short stories frustrate me even more because they break so many rules that they're often not even stories in a proper sense; they often lack a beginning, a middle and an end. They are mere vignettes and as such, well, they are just so much wallpaper.

The fact that Ali Smith dispels all these prejudices is just one way in which I find her writing a terrific relief. She writes about women the way that I know women, real women, women as human beings as opposed to heroines, or creatures preoccupied by shoes and scales and men. She writes very movingly about the love between women, not just sexual love which she handles beautifully, but every flavour of affection, of friendship, sympathy and kindness between women.

Every story in the book features something about death or loss of one sort of another, but not one manages to be even slightly morbid. Okay, one does, a bit. But mostly the darkness is woven into its rightful place as part of life's rich tapestry.

I can still see our heads together, our eyes and our mouths, intent and pretty and serious as stoats, as we thought things as innocent and perilous as, for instance, that suicide must be a good thing, at the very least a truly romantic thing, something all truly romantic people would do, since people so clearly felt so much when they did it.

Smith plays with grammar from time to time, but she takes it in hand rather than murdering it with a pitchfork and dancing on its grave. She moves fluently between tenses and grammatical persons, often within the same narrative. And there is no fluff; Smith is supposedly literary, but this was a doddle of a read. Her writing is as digestible as it is delicious, which is a rare thing indeed.

Get the impression I generally liked this book? I did. Generally.


* Concerned readers may need to know that through a pain-staking process of ellimination (I'm sure someone mentioned Ali Smith to me recently - it'll probably be them), I did eventually work out who had sent the book. Coincidentally, the same person who had sent the cactus.
Posted by The Goldfish at 9:02 AM

The term "postmodern" always amuses me. Check out the short stories of HE Bates written in the early 1950s sometime (not The Darling Buds of May). They anticipate all the postmodern tricks by fifty years.

Especially since they did send you an email saying it was on it's way ;-)

My friend just came back from the States with a gift for me. An anthology of short stories called 'Book of People with Problems'.