My Gran was a very unhappy and unpleasant character.  I think she suffered from untreated depression for most of her life, she had no friends to speak of, and had dramatic fallings out with, over time, almost every member of her vast family. As she became older and more infirm, she fell further in on herself, paranoid and suspicious of everyone she encountered, until she developed dementia and lost the ability to hold a grudge. Now my Gran is more cheerful than I can ever remember her being. When the nursing home took photos for a newsletter, Gran was the single smiling face amid the crowd of bewildered residents. Occasionally, Gran's old suspicious self seeps through, but only briefly, before she loses her thread.

Mum was helping Gran write a card out to Stephen and I, spelling out our names.

And so somehow, we received a card addressed 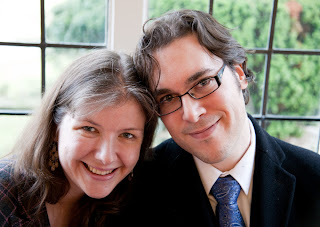 The card was because last Thursday, we performed the legal part of our marriage. The wedding is in July and the plan was to do the Registry Office bit very quietly indeed. We thought it was only fair to let our folks come along if they wanted, and soon enough there were eleven people there. But it was nice. It was quiet by most people's standards, and getting underway at four o'clock in the afternoon (Remember four o'clock last Thursday? It was about then that the blizzard arrived.) it wasn't a long day.

I couldn't pronounce matrimony - I didn't pronounce matrimony, so there's the possibility that legally, Stephen and I have another kind of legal contract altogether - possibly something only covered by Klingon Law. Sophie is practising her vocal skills at the moment, and gave a running commentary like a less articulate Huw Edwards (although there were times even during the Royal Wedding where "Bla bla bla bla bla." would have made perfect sense).  Both these things worked in our favour, because it all felt quite strange and giggleless silence would have made everything rather tense.
Later that evening, I discovered that, thanks to the considerable help of a certain gherkin fan, I won my benefits appeal.  And the next day, a tiny white poodle came into season.  This was significant because she lives with stud dogs, her owner was away and Stephen's parents had offered to take care of her if this occurred.

Dogs teach us something about hierarchy and nature. Ajax is the oldest, largest and most intelligent dog, and the one aggressive in play; he'll growl, bear his teeth, pounce and gently nip at you.  He'll bound after pigeons in the garden (but will slow right up if they don't fly away). He's very attached to us all - when Stephen and I were away and sent a postcard home, he took it for himself and wouldn't let it go - but he's not very good at doing what he's told. Yet somehow, he is at the bottom of the pack, and even Suzi, size and temperament of a rabbit, seems to have inserted herself above him; she goes first, he gets out of her way.

Few animals are hierarchical in the same way dogs are, and people certainly aren't.  But people are the only ones who ever argue that there's any obvious natural system (smarts, strength, seniority etc.) that determines who should be in charge. They ought to observe toy poodles.

Anyway, all in all, life is treating us very well.  We're planning the wedding for the summer, we're watching the skies for the possibility that there might be a spring at some point between now and then and I'm writing lots and lots and lots (at least, by my standards, which means I'm getting on with my work, at a slow but steady pace).

Yay: Congratulations you guys! :) I'm glad you had a nice (if blizzard-y) day.

congratulations to you both :) I reckon your gran had it just about right - the two of you are positively radioactively glowing with happiness!

I was trying to find the correct scene, but this is the closest I could find - Fantastic Mr Fox perfectly sums up how I felt.

And thank you all!

Your card reminded me of one my nana wrote while she was in the hospital, for her little sister's birthday. My aunt wasn't quite sure that Nana could remember exactly what a card was and what one was supposed to do with it, so she wrote the main text, leaving Nana only with the task of writing her own name.

When Nana came to sign the card, my aunt said, "Big E" (for Elsie), and we all watched with interest as Nana wrote many letters. She had misheard, and had written "Piggy". Then she wrote "Elsie". I think that Nana's sister received the explanation for this unusual monkier...

oh it perfectly sums it up :) many many congratulations!!

Thank you so much, everyone!