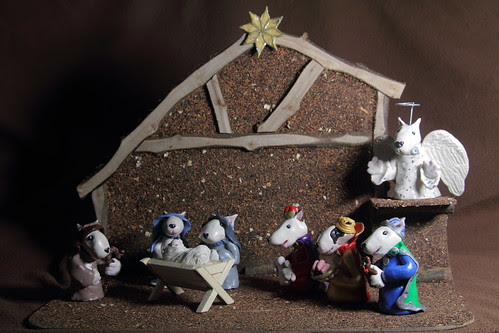 So this was by far the oddest craft project of 2011. It wasn't my idea, but when people I care for were contemplating paying up to £100 on a fimo Bull Terrier Nativity Set on eBay, I had to step in and volunteer to make one myself. I used Sculpey, which is cheaper than Fimo, and probably used about £15 worth of polymer clay.

Stephen used a lathe to make wooden cones for me to build the figures around, to stop them keeling over mid-production. Originally, I'd intended to remove the cones once the clay was cooked, but then decided they made the models more stable. Also, they got stuck. 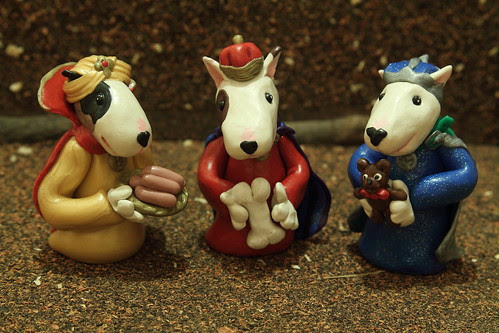 I haven't played with polymer clay for years - perhaps seven or eight years at least - so when I volunteered I was kind of thinking the project would eat up half of December and maybe I wouldn't be able to pull it off. So, whilst it wasn't my idea and part of me keeps thinking this thing I've made could win prizes for poor taste, I'm really rather chuffed about how it turned out.

Stephen made the manger in about half an hour and his Dad made the stable backdrop in a little longer than that. 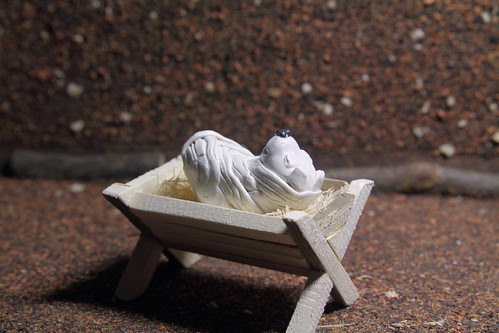 I hadn't met any bull terriers until this spring, when I made friends with two miniature bull terriers, who are rather akin to albino pig-shark hybrids. They're not nearly as bright as my border collie or poodle compadres and they move around as if there are no obstacles of any kind, anywhere – if your legs are in the way of where they want to go, they're going to go through them. But they are extremely friendly.

The nativity set is a present for someone, who at the time of writing has no idea what's in store for them. They're coming round on Saturday. I hope it makes sense to them.

Image Description: Possibly defies description. Models of English Bull Terriers made out of coloured polymer clay, representing characters from the nativity (Mary, Joseph, Jesus, a Shepherd, an Angel and three Wise Men/ Dogs). In the second picture, the wise dogs are bearing gifts; sausages, a bone and a teddy. In the third picture, we see Puppy Jesus, a puppy wrapped in swaddling clothes, in a pale wooden manger with wood shavings for straw.
Posted by The Goldfish at 9:08 PM

Lovely zaney and so neat, thanks for sharing them

OMG I LOVE them! You are so creative!
I hope "chuffed" means happy with them....

Wow! Those are gorgeous. Lucky friend.

Oh my giddy aunt! I'm glad to read they weren't your idea - did seem very "you". They are fabulously made and great fun, I'm sure they'll be appreciated.

Thanks everyone! They were received on Saturday and the person in question seemed extremely pleased with them. Only trouble is, she's just acquired two kittens, so they may well be eaten by the new year!