Messing about on the river 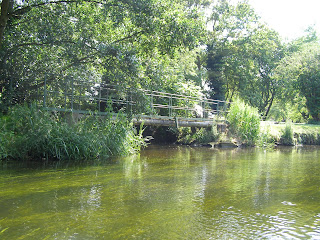 Yesterday was a really good day, after a good few weeks of rough. It was the half-way point of the year and my Dad's birthday, and my folks were looking after Alexander whilst Rosie was off singing on the South Bank. And it was probably the hottest day of the year, at least down South. So my folks, [ex], Alex and I went for a picnic in the woods before going rowing on the River Little Ouse. It was absolutely gorgeous and a splendid time was had by all!

The river is runs roughly along some of the border between Norfolk and Suffolk, but it's kind of tucked away from everything. And we didn't see another soul that afternoon - nobody on the river, nobody on the bank. Lots of horses, waterfowl and absolute swarms of electric blue and black damson flies. Did you know that when two damson flies mate, they make the shape of a heart with their bodies? I didn't, now I do. 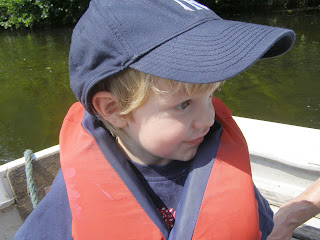 Alexander is talking much more than even a few months ago and making a really conscientious effort to learn new words and concepts – for ages, he was speaking, but wasn't really interested in conversation. Now, he's asking lots of questions and often whispers a word someone has said back to himself to help it sink in. And he has some long words, including a disturbing variety of car makes and models.

He was very impressed with my powerchair and said it just like a helicopter. I think this is because it has a joystick, not because it can fly (I don't like to fly it in public; people get complacent about accessibility when they know you could just fly between floors if you wanted to). 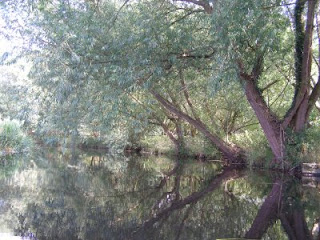 Incidentally, my sister was singing at the South Bank Centre with a group called the Celestial Sirens, who did the music for this week's and next week's Woman's Hour Drama Sacred Hearts on Radio 4 - you can still catch up listening to this over the weekend if you like.

Will blog properly really soon, I promise!
Posted by The Goldfish at 9:41 PM

I think this is because it has a joystick, not because it can fly (I don't like to fly it in public; people get complacent about accessibility when they know you could just fly between floors if you wanted to).

This is CLASSIC. I'm not even sure how to tell you how awesomely ironic this statement is. Words cannot express the level of win. :)

Aaahh...halcyon days! Sounds and looks perfect. Glad you all had such a good time.

We in Scotland are also enjoying the heatwave. Unfortunately, it's been really muggy and nasty. Two ferocious thunderstorms Thursday and Friday. Took me almost 2 hours each day to coax Coy out from under the bed - even when tempted with his favourite treat, extra strong matured Cheddar!

Sensible child, in my opinion...

I'm happy that you are feeling better and things are a bit more fun! What a beautiful spot! I know that the talking is momentous and wit til he's chewing your ear of as we say in the states!

Good to read that you had such a lovely day. I'm sure Alexander's vocab is helped no end by having an uber intelligent Auntie.
Wow, what lovely singing from Rosie and crew.
As for power chairs...mine doesn't fly :-( have I missed a secret button somewhere?

Didn't know yew wuz a local. I'm a Norfolk Dumpling. We really do have a great area of the country in Norfolk and Suffolk. Weather not so grand these last few days though !