I went to the shops and I bought... 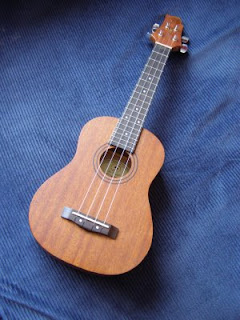 ...a ukelele! Isn't it a thing of beauty? Most importantly, it sounds beautiful and within a matter of weeks, I daresay I should be able to do this sort of thing.

The guy in the music shop tried to sell us a mandolin case to put it in. I suggested that having a ukelele in a mandolin case was a little like keeping your machine gun in a violin case. The guy looked kind of nervous.

We bought it in Cambridge where we also had a look the new clock at Corpus Christi. It is almost five feet wide and has an evil-looking grasshopper on top, which is munching up the time.

A lady who was standing by the clock said, "I'm sure the grasshopper is supposed to do something on the hour, like light up or wave its arm in the air."

To which [...] responded, "It climbs down and bites your leg off. At least that's what happened to her." and he nods towards the wheelchair.

Later I wheeled into a tree, although I was pretty knackered by that point and it was a tree coming out of the floor in a shopping centre. And I lost our parking ticket. And my computer died. But today I am too busy rearranging Linkin Park songs for ukelele to care!
Posted by The Goldfish at 1:39 PM

Email ThisBlogThis!Share to TwitterShare to FacebookShare to Pinterest
Labels: General Nonsense, Getting Out, Music, Shopping

Hurrah! I think I know which shop you bought that in, as well. :) And AJ's remark nearly made me spit tea all over the desk.

I want to go see that clock! We may have to head down that way at Christmas.

Rhe tree just came out and hit you, right? Another hazard for unsuspecting w/c users.

Yippee for the ukelele. In the same way that you post pix of pix, can you post mp3 of sound?

My cousin used to play his every hot, summer night, on the porch. Great sound.

Have you heard of Liz Bentley? She is a disabled poet/comedian who performs with a ukelele, almost identical to that one (as well as a Casio keyboard)...

Fun post. Love the ukelele (sorry about the tree though!) Great to have you in the blog carnival!