Return of the Goldfish 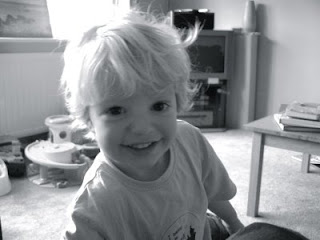 I was very slow, then I was very busy and then I had some serious sleeping to do. Now I'm picking up again and making a tentative return to blogging and the world generally.

The busiest bit involved a trip to Southampton to visit Alexander. I was only there a few days, but they were very full days, as days tend to be in the company of a two year old.

Alex is still not saying a great deal, but he made several admiral attempts at my name. He is also adept at pointing out churches and miscellaneous Christian iconography (crucifixes etc.) with a very musical "Dong!" (the sound a church bell makes, presumably and much easier to pronounce than church 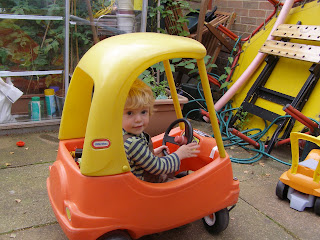 I have been monitoring Alex's verbal progress on account of the competitive auntying my friend Vic and I engage in; Vic's two-year-old nephew is using grammatical tenses and learning to count in Cantonese! However, my mother informs me that I didn't have a lot to say for myself at two either. See, I wasn't a smartie-nappy (which is like a smartie-pants, but smaller).

I got to see the school where Alex is starting nursery in a few week. I know, two years old, but now I've inspected the place I reckon it'll be a lot of fun for him. It'll only be a few mornings a week in any case. 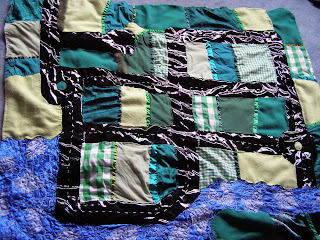 For his birthday (which is actually this Wednesday), I made Alex a playmat, a blanket with roads and fields sewn on. This took me ages, sewing it all by hand, hours and hours and hours.

Fortunately, it didn't cost me anything, as I seemed to have a few green remnants from things like Alex's jacket plus two green tops, one of which had paint down the front and the other had an irreparable hole on the chest. I found a scrap of blue lining fabric for the river and teh roads are made of less than a remnant of black PVC that I bought ages ago because it was very cheap (although I told my sister it had come from one of [...]'s old catsuits). There are even road markings embroidered on there but you probably can't make them out.

Oh yeah and the blanket I sewed all this on? It was the accursed wheelchair blanket my mother gave me some years ago. When she noticed, I claimed it had been on my lap (serving its purpose) when I had begun to sew and it accidentally got stitched into the project. 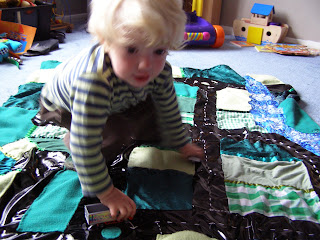 Hopefully Alex will be able to use it for lots of different games, for toy cars, farm animals and later on, as a landscape for a Lego town (which was the favourite use for the one Mum made us as children).

Alex knew exactly what to do with it and I could only get blurred images of his zooming a toy truck around the roads. I tried to observe whether he 'drove' on the right side of the road. Even though the steering wheel of his Little Tykes car isn't attached to anything, he nevertheless steers in the correct direction every time he turns. Which I think is genius.

In other news, tomorrow marks twelve years of the Dreaded Lurgy. I am rather proud of my near indifference to this event - not quite so near that I haven't noticed, but pretty damn near.
Posted by The Goldfish at 12:10 PM

Dong is indeed a very sensible thing to say when church-spotting, because that's how they go!

Well he's going round the roundabout in the right direction. Ring up the DVLA and schedule that kid a road test! He's ready. :D Cor blimey he's a cutie.

I'm glad you're working your way back. It sounds like the time off has been good, even when you had to take it slowly. Welcome back! :)

When she was a similar age, my baby sister used to point to a lot of large buildings and say 'church'. Alas, she was frequently pointing at pubs at the time. We wonder if this was a foreshadowing of things to come...

By the way, it's great to have you back!

Welcome back. Way to go with the re-purposing of the "wheelchair blanket." Maybe we should start a new tradition of anniversary gifts for Lurgy-type things. The 12th year is traditionally linen or silk. How about very good chocolate instead?

I love the blanket. What a great place for such a cute kid to play.

Please go to link and sign the petition to

Pass along to friends,