The Goldfish Guide to Painting a Portrait from a Photograph in the Absence of Talent or Experience. 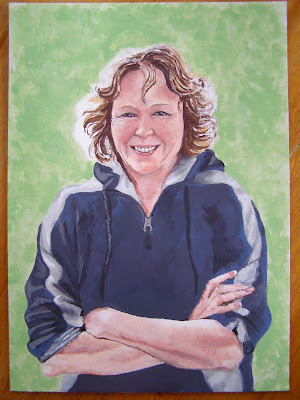 Now this I am chuffed with. I've never painted a portrait before and this is roughly what my mother looks like.

Of course, I did cheat and I thought I should confess all here in case it might be useful to anyone else. I know there are a few proper artists who read here, but there might be someone who has a similar absence of either talent or experience as me.

First off, I used a photograph. Obviously. I used a digital photograph which I printed off as big as I could, which happened to be A4. I found a painting board at the back of my craft cupboard which was about half way between A4 and A3 and of the same proportions.

Using these proportions, I then drew a grid of approximate squares on both my photo and the board. You don't need to measure along the edge - you'd have to use fractions of milimetres. Instead you use that old trick from school maths where you lay the ruler diagnonally across at a multiple of the number of lines you want to draw. So for example, if I wanted my grid ten across on a board 334mm wide, I would lay the ruler such that one edge of the paper was on 0mm and one was on 400mm, then draw a mark at every 40mm. I'd then repeat this so I've got my two dots I need to draw a straight line. Does that make sense?

I then turned the photo upside down and began to copy the picture across, using the lines as a guide. Copying upside down is a very good idea if ever you're copying an existing picture, because it forces you to draw what you see as opposed to what you know to be there - I imagine this is particularly important with faces, which we instinctively want to be symmetrical and orderly, when of course they're not - especially not in my family.

Anyway, I then splodged all the paint onto the board in a random fashion, returning to it for a few minutes at a time a few times a day for several days. Okay, so that's not fair; I suppose I do have some experience with using paint, but as you may have gathered, I tend to decorate things in a cartoonish manner as opposed to proper painting.

And I have to say, that whilst the painting is a good likeness to my mother, it doesn't compare brilliantly to the photograph. So a further cheat should probably be, destroy the photograph and nobody need be disillusioned.
Posted by The Goldfish at 11:25 AM

It came out awesome!!! And your 'formula' for painting it is terrific! Thanks for the trick!

Yes, well we can tell you fibbed about the absence of talent because that really is an excellent piece of work, so much so that you are to be both praised and chided for your artwork and fibbing respectively.
You can tell I'm horribly jealous. AJ is right, this really is very good indeed!

(I didn't even know about that ruler trick, so thank you.)

I come from a family of artists (though I have not one iota of artistry when it comes to painting) and I am thoroughly impressed by this first attempt. In fact, I think you're a natural. More!

That's really good Goldfish! I think you will find a lot of artists working that way.

Keep at it, practice does make perfect, here speaks an old practiser;-)

But like magicians you should not give away how you did it!

That's very good! You immediately like the person in the portrait. I wonder how many of the other bloggers whose blogs I read also have hidden artistic talents?

I think you underestimate the talent you have artistically -- not just in this painting but in your other creations too. Lovely !

Goldfish, I probably don't need to tell you this but many professional artists use photographs to work from. And before cameras, landscape artists would cement the idea of the finished work by producing a series of sketches, sometimes many, many sketches pieced together in grid form. I think The Hay Wain was produced this way. And Leonardo Da Vinci's sketches and doodles are as famous as anything else he produced.
The method that leads to the final result in the artistic process can never be described as cheating. You have produced art, and it is very good indeed. Particularly the hands and the skin tones. Fantastic!

That's really cool - do you really have such defined forearms, what do you do to keep them so toned and fit? Anyway, it is really cool and I find it a very warm painting, makes me want to know the person in it, which is not like many portraits (like the ones in Uni's of old deans). So well impressed.

Sorry I didn't get here to say so sooner (MANY THOUSANDS of interruptions, mostly from the same person), but I do love this painting very much. I love her eyes, her stance, and especially her arms/hands.

And this lady, whether or not she looks like your mother (and I'll take your word for it that she does), looks like a lovely person. So well done, you. :)