And so this is Christmas 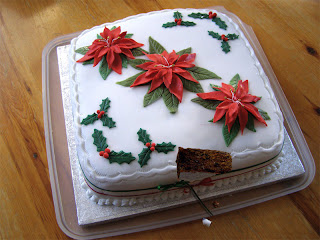 Almost. Look; the twenty-third of December. How did that come round so quick? Tomorrow I will be in my late-twenties as opposed to my mid-twenties, which is quite exciting. Twenty-seven has always struck me as a very sexy age to be; I'm feeling due for a prime number. Also, for most of this year I have thought I was twenty-eight for some reason, so I've unexpectedly gained a year - or two, I guess.

I haven't really stolen a slice of cake, but a certain fiendish geezer doctored my picture for blackmail purposes.

We made it to Cambridge on Thursday and had a very nice day indeed. The Sedgewick Museum was really very good. Probably the most boring place in the world if you have no interest in rocks and fossils and I think you'd probably have to apply a fair amount of imagination to enthuse a child on the matter.

Then we went to a pub called the Eagle for lunch. We went to this pub because it was one my folks had been in before, but in fact it turned out to be the pub in which Watson and Crick had got pissed every night, and whose room-swimming had revealed the anti-clockwise orientation of double hel

ix (that's not at all what it said on the plaque on the wall, but I filled in the narrative gaps). We then went to the Art Gallery, which was very nice and we finished up at the Starbucks in Borders, where Jess's husband maybe saw Stephen Hawking (I recounted this almost-anecdote at the time and everyone was very impressed). And I had Gingerbread Coffee, which is weird but very nice, and my folks bought me a book I'd wanted for ages.

So that was all very good. And whilst of course I've been knackered since, I've not entered any kind of major collapse, as I feared I might - it was easily the busiest day I've had since we moved house in February. I'm now looking forward to Christmas, which should be fairly quiet and manageable.

I hope you all have a lovely Christmas and thanks for all very much the support you have given me this year.
Posted by The Goldfish at 1:02 PM

Email ThisBlogThis!Share to TwitterShare to FacebookShare to Pinterest
Labels: Events, General Nonsense, Getting Out, History

Paul wishes to protest that he very definitely did see Professor Hawking. And furthermore I actually did get a sneaky peek at his screen on our way out. It's all multicolored lines of text, and that. Very nifty.

(You know you are a Yank if you find yourself calling Stephen Hawking's communications kit "nifty." :D )

I am very pleased you made it to cambridge! And had the Gingerbread Coffee, what is my favorite. (I can't stomach their regular stuff.)

May as well scoff the lot of that cake, now it's compromised. Every woman for herself! Nom nom nom.

I loved all the years ending in 7 for no logical reason. 27 was my final year without kids or pregnant, though I didn't know it at the time. I even shamelessly juggled two men for a while! Very sexy indeed.

That is, I'm assuming you're turning 27 and not 29 (the next prime number you're due to meet).

By which of course I mean I remember being in my late 20s, as opposed to remembering the back end of the 1920s.

I might be a cantankerous old fart, but I'm still in my early thirties:-)

So, so happy to read that you had an outing, and that it was such fun.

And dang, Mr. Geezer, that is some fine cake photo doctoring! I'd never have known it was an untruth if Goldfish hadn't said so.

Hey, hope today's been a fab birthday. And have a happy Christmas too - sorry to put both in the same message, I'm suffering from a lack of wifi hotspots right now...

Happy Christmas Goldfish. Glad to see you are enjoying.

Go Girl! Happy Birthday and all the best for the New Year

Ah, The Eagle! A boy once bought me a double Bailey's in the Eagle.

(I have grown up since then.)

Well, birthday girl, how was that cake? :)