2007 might be summarised as moved house, then I was sick.

It's not been a bad year, nothing terrible has happened and even my health hasn't been disastrous. But very little has gone according to plan; it has been a year of great frustrations and a lot of those have been around the shortfall between what I wanted to do and what my health would let me do. Right now, I must admit, I feel decidedly negative about this. The nights may be drawing out but we're about to enter the darkest days for the immune system and mine is already decidedly ropey. Not that I am likely to catch anything that would carry me off or anything like that, but I really don't want to feel any worse than I do just now.

I think I will put down 2007 as a learning experience. I'm sure I have learnt a lot, but I haven't entirely ironed out my perspective on things and I'm likely to be rather dull and vague if I go there right now. 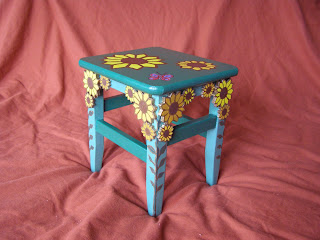 Christmas was mostly very good, thank you. My cake was a great success, so far as I can tell. Rather, uh, moist, but that was to be expected. Some of it has travelled as far as Snowdonia, would you believe? I saw Alexander on Boxing Day and it seemed that he was having a lovely time, even if he did get enough toys to furnish a large kindergarten. His favourite present had been a baby-baby-grand, so to speak, which he played all Christmas Day and then returned to, stark naked, after his evening bath. 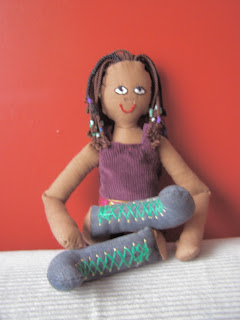 I gave him a stool which I had decorated and painted and a doll I made. He responded well to the stool in so far as he immediately understood that it was something to sit on. The doll is called Petal the Pirate (to be friends with Kettle - Petal doesn't look much like a pirate, I know but she is one because I said so). I wrapped Petal up such that she could still see out of the wrapping paper and as soon as Alexander spotted her eyes, he tore off the paper, pulled her out and gave her a big hug. He then ran off with her and came back empty handed. I later found her sat in a pair of slippers; I'm not quite sure what that means.

So that was Christmas and now we're about to enter 2008. Despite my significant fears about January and February, I do feel positive about the new year. I've spent the last several months waiting for my health to improve after a dip. Now is the time to stop waiting around and investigate whether there are different ways of going about the things I want to do. I'm sure I haven't exhausted all the possibilities just yet.

Happy New Year Everybody!
Posted by The Goldfish at 10:53 AM

You have created some incredible stuff this year, physically and intellectually. Plus of course organising BADD which really is a serious achievement.

Here's hoping for an uptick soon :)

I learned much from you this year, my friend. Thank you.

Best wishes for fewer frustrations and more fun cakes in the coming year.

Best wishes Goldfish. There was a huge amount of insightful stuff posted by you last year, and the year before and and ... so best wishes for a good progression through the dark days until Spring.

Spring is as far off as Christmas was two months ago. Which may sound ridiculous, but it puts passages of time into perspective. No. It actually just sounds ridiculous. But, ahem, anyway I still feel once January is dispensed with, March is really not far off at all. And there's plenty of things to write, make and do in the meantime. Loved the stool. Bubble and squeak seems to be my new thing. My son loves it. He eats vegetables when they take on other guises. Will be going to Bot Gardens with my camera soon. Go away grey!

I like your stuff - creative. A Happy New Year to you. Check out the give-away on my blog. I think that you'll be glad you did.

Petal must be a Shoe Pirate. I don't know what it is, but I like the way it sounds.

Best wishes on the new year and yeah - naked piano playing is the new wave.