God is the experience of looking at a tree and saying, "Ah!" 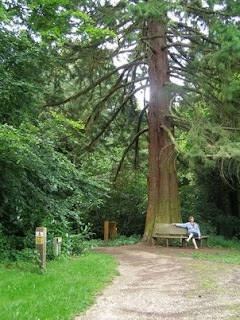 (That was a Joseph Campbell quote, in case you wondered)

Today Mum took me to Brandon Country Park which is a pretty green place near here that nobody seems to know about. It's free to park there, they have a coffee shop, toilets and the paths are pretty good for wheelchairs. Not all of them, but you can have a pretty good 'walk' there on the flat. 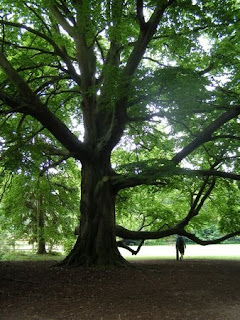 Like I say, a hidden gem and thus today, on a sunny day in the school holidays, there was nobody about.

There are a couple of massive trees there. Our American and perhaps particularly our Canadian cousins will be decidedly unimpressed with a rather young Redwood and whatever this one on the left is (you can see my 5'11" mother wandering off to the right, for scale). I must admit I did check nobody was looking, kicked off my shoes, got up out of the wheelchair and attempted to climb it. But these are big kickass trees for the South of England. 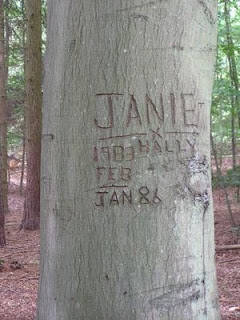 The woods are haunted by some chap in a deer-stalker, but he wasn't about today. There is a mausoleum of the family that used to own the land and tree documenting the relationship of Janie and Hally. Writing carved into the bark reads Janie + Hally, 1983 Feb., Jan 86. 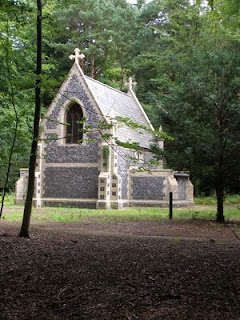 My Mum decided that Janie and Hally had been happily in love during the spring of 1983, but three years later Hally had brutally murdered Janie and buried her body beside the tree on which their names were inscribed. My Mum has that sort of imagination.

We saw some squirrels, a Jay, the most enormous black slug you ever did see. On the way home a stoat crossed the road in front of the car. I had to look it up to know it was a stoat as opposed to a weasel, and learnt that in Japan, a stoat is a sign of good luck. 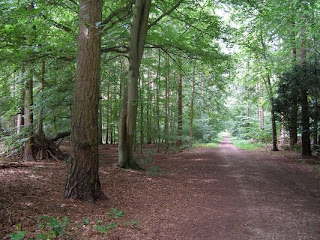 It was a very nice couple of hours; it is so good to be out in green places. Sara wrote about this last week in Green is the Meaning. Seahorse has also been enjoying the great outdoors in Shropshire.

It was also nice to be with my Mum and talk about nonsense. I managed to breach the sticky issue of the big bad family secret which I had inadvertently divulged to someone. It is a rather pathetic big bad family secret, something which has had shame heeped upon it where there ought to be no shame (someone did do something naughty, but nothing injurious to another person and it was over fifty years ago). Fortunately Mum was only slightly surprised that that someone hadn't known already. Which was a relief.
Posted by The Goldfish at 5:51 PM

Email ThisBlogThis!Share to TwitterShare to FacebookShare to Pinterest
Labels: General Nonsense, Getting Out

There is an Annie Dillard piece about people who gain sight in adulthood--I will come back later when I have it in front of me because I know otherwise I will mangle it.

Hi! Back. From Pilgrim at Tinker Creek:

When the doctor took her bandages off and led her into the garden, the girl who was no longer blind saw "the tree with lights in it." It was for this tree I searched through the peach orchards of summer, in the forests of fall and down winter and spring for years. Then on day I was walking along Tinker Creek thinking of nothing at all and I saw the tree with lights in it. I saw the backyard cedar where the mourning doves roost charged and transfigured, each cell bussing with flame. I stood on the grass with the lights in it, grass that was wholly fire, utterly focused and utterly dreamed. It was less like seeing than being for the first time seen, knocked breathless by a powerful glance. The flood of fire abated, but I'm still spending the power.


Sorry so long, but I thought you'd like to read it/be reminded of it. It's from the last paragraph of chapter 2 (I think this is more useful than telling you the page # of an American edition.)

I was tagged with a meme by 2 bloggers today and I'm tagging you, unless you don't want to do it or have already done it. It's 8 random things about yourself, than tagging 8 other bloggers.

That looks nice. If I can kick my brain enough to remember, I may persuade Steve that we should stop there next time we're driving to his (we'd probably go near it as the A14 is messed up at the moment).

'Slightly surprised' seems like the right option to me.

oo, i'm a bit jealous. and wish there were some hidden green gems about where i live. i love new york, but all the concrete can get a bit...grey.

when i lived in california and had a car, i frequently went up to muir woods, a big redwoods area. then i would just sit and read and breathe in the oxygen those trees were kind enough to lend me. it was great.

glad you had a good day.

Yay! I'm so happy you got out!

I love seeing redwoods in places they don't belong. There's one in the Bois de Boulogne that I used to visit. It looked ridiculously tidy.

And I think I'm back from lunch.

Lovely place. I used to stop over for a break here when I was doing a lovely reminiscence project with older people in the town. I heard soem fantastic stories about the woods and the town.

Nice to have a relaxed time with your Mum and strange how family secrets can get all out of proportion.

This looks very verdent, and I like the way your mum thinks too. That's why I like going to graveyards, some inscriptions are a bit like a mini soap opera.

Glad you were out and about enjoying the Green!

What a lovely place and glad you got out to enjoy a natural cathedral of towering cool trees.