We had a lovely day on Monday. Rather worse for wear now, but it was well worth it. 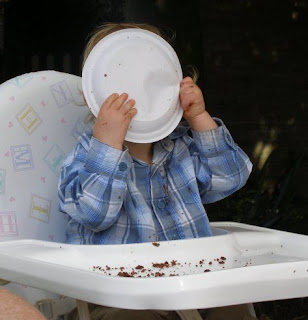 We had a little do for Alexander's first birthday in my folks' garden; there was Alex, his Mummy, Daddy, both sets of grandparents and his favourite Auntie and Uncle.

The Goldfish family and my sister's in-laws haven't seen an awful lot of one another, but my Dad managed to disperse any social tension by serving us "Pimms and Lemonade" with what I reckon was about 1 part lemonade to 5 parts Pimms - you certainly couldn't see any of the bubbles. But of course, we didn't realise this until we'd started drinking it and soon everyone was comfortably giggling and making rude remarks about one another as if we'd all been fast friends for some years.

My Dad also provided a dysfunctional bubble-generator/ water-pistol, which kept [...] busy while he took the entire thing apart, performed his juju magic and put it back together again in perfect working order. 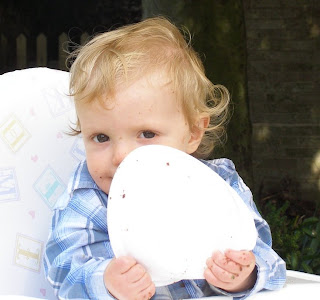 My folks have a little paddling pool for children who visit, which we had fun in, and for his birthday, Alex got some tubes to crawl down. These, Alex and I mostly used merely for peek-a-boo purposes and Alex's father employed in a dramatic reconstruction of his terrifying pot-holing adventure - made all the more terrifying when we turned the now functional water pistol on him once he was thoroughly stuck.

Alex's Mummy had made a hedgehog cake, presumably to raise awareness that hedgehog numbers are dwindling in the UK. She realised at the eleventh hour that her design could so easily have been converted into a Dalek Cake (link originally provided by Jess in the comments to a post of Lady Bracknell's). 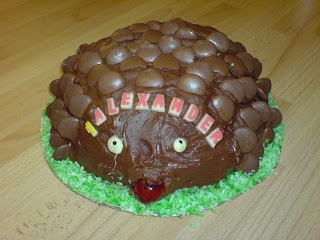 The cake was delicious and Alexander liked it so much that he smeared it all over his face and hair, an act accompanied by squeals of delight (see above - I didn't take too many pictures as I was busy having fun).

Alexander's favourite birthday present by far was a little toy piano with four notes very much like this. He has apparently played with one of these at a club he used to attend called Baby Sensory and was delighted to unwrap it and make noise with his. Making noise seemed to be the principle use to which he employed his various presents. 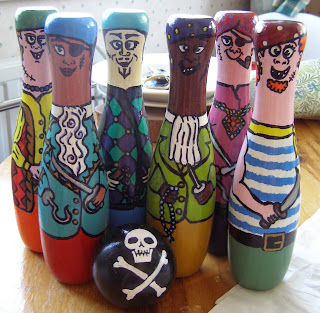 I painted up some wooden skittles for him, which you may note are extremely well varnished in the hope that not all the paintwork falls off the first time they're knocked over. These were a terrific rush to finish; last coat applied first thing Monday morning. We made him an alternative ball out of two pairs of black socks which I then sewed together - one you could throw at a window by mistake without breaking it. Alex gave them all a quick taste-test and seemed to approve.

It was a really good day; last week I was anxious whether I would be up to going at all, and whether it might be grim for me if I did. But it was good, I was fine and whilst it is impossible that Alex will actually remember it, I believe that he had a very good birthday himself.
Posted by The Goldfish at 4:38 PM

Bowled over by your Pirates;-)

Of course, I can't fairly take credit for the link to "Dalek cakes." I can only bear astonished witness to its Daleky, cakey goodness. And then call attention to it by pointing. There! Look! Cake! Like that.

Glad the day was such a good one. :) The skittles look fantastic! As it happens (and talking of Pirates), we had a similarly lucky one-year-old up at the weekend, to whom the hubby and I gave a Genuine Pittsburgh Pirates baseball and small wooden bat. Both of Which, naturally, the adult males in attendance promptly whisked away and began to play with themselves. You haven't seen sad till you've seen a load of grown men trying to swing at a baseball with a miniature bat. Oh, dear me.

Nice to see that at least one of your rufty-tufty pirates is multiply-impaired...;-)

And, look, I know it's very bad form to reply to comment on someone else's comment rather than on the post itself, but if you'd permit me, just this once?

Jess: you do make me laugh!

I've made hog biscuits... but will have to try a cake too.

I'm a hedgehog rehabilitator by the way... :)

Lady B.: I'm pleased when my mad yammerings make anyone laugh, but coming from you I consider it particularly high praise. :)

those skittles look fantastic. I'm glad it was a nice party :)

I've been astonished at how much Z. remembers--at 2 1/2, she doesn't remember her first birthday, but she remembers things from a year ago quite clearly.

And of course she still plays with the toys from that birthday!

Ooo chocolate buttons! I made something similar for my oldest daughter several decades or maybe lifetimes[?] ago.
Many happy returns of the day.

Alexander will remember the piano - I have a pic of mine at 22 months, sat at the piano plonking away - and she remembers doing it !

Ah ha. Hidden talent: we have an artist in the midst. Great pirates. You could market those. Love the cake too. Are those chocolate mallow cakes for the spikes and can I have one ?

Of course Alex rubbed the cake in his hair. It's the done thing on your first birthday.....simply evryone who's anyone is doing it darling

I love the skittles. I wish you were my Auntie.

A really joyous post, one of those ones that leaps out of the screen with its warmth.

Thanks everyone - sorry I'm getting so behind with commenting but comments are always appreciated (and you are more than welcome to talk amongst yourselves).