Recently, my creative projects appear to have taken a sinister turn. I suspect my big mistake is doing stuff when I'm not entirely conscious. And I keep producing hideous objects. Okay, so I have produced two hideous objects.

I had the idea of making a toy bat for Alex. You may remember that his grandmother is referred to as Superbat, I had been singing Twinkle Twinkle Little Bat to him, from Alice in Wonderland and I was getting a little nostalgic for Whitby. I thought young Alex should like a Twinkle Bat of his own.

I didn't have a pattern or anything, but I didn't for his pirate doll. Patterns? Who needs patterns?! So I sewed this during periods when really I should have been asleep. Or indeed, perhaps, when I was asleep. Because yesterday I suddenly found it was finished... and it looked like this... 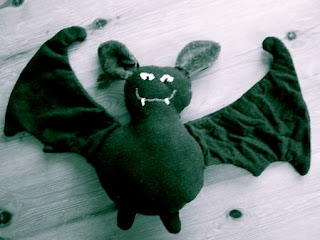 I put it in black and white, because it is even worse in colour. Honestly. I'll hide it behind a link and you can look at it here... if you dare!

Look at its feet! Look at its ears! Look at the shape of it! This really is an appalling bat. This is a truly a bat gone wrong.

Only a couple of weeks ago, I decided to decorate a couple of t-shirts for Alexander using some fabric paints I was given. I don't have any experience with fabric painting, but the first attempt didn't go too badly. I can't actually remember painting on the second t-shirt, that period is rather vague and blurry, but when I had finished I looked at it and saw this.... 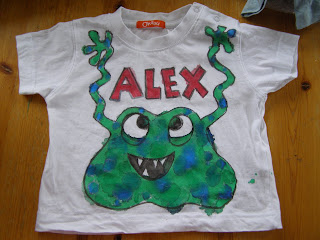 It might not have been so bad had the paint not run. It went all splodgy. It's a terrific mess.

I must admit I did give this to Alex anyway as I felt it was probably suitable attire for playing about in the mud - an essential activity for any growing child.

It is pretty bad though.

The very worst thing I ever produced as an adult was a cross-stitch of Winnie The Pooh. I don't do or like cross-stitch, but someone gave me a kit during a spell of very ill health, so I sat in bed and attempted it. It had three arms. It had the right number of legs but one of them was coming out of Pooh's ear. Naturally nothing quite compared to that classic anecdote of Damon's, which if you haven't heard you have to listen too now - it's the top audio file on this page. 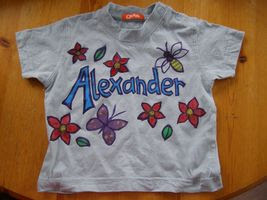 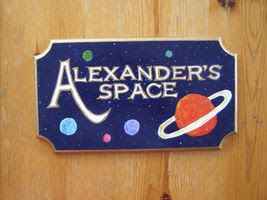 Alex did at least get two passable presents; my first attempt t-shirt and a plaque for his bedroom door.
Posted by The Goldfish at 4:03 PM

This may sound conciliatory and annoying, it's not meant as such but I think that bat is really rather wonderful. I'd be absolutely thrilled to bits if someone hand-made me a bat. I like bats.

It's a disabled bat. Obviously. Nothing wrong with that.

I'm partial to the mudding shirt myself...

Yeah, I think the bat AND the shirt rocks! I mean, hey, I had to sleep at my grandparents under a victorian painting of "the poor gypsie girl" whose eyes would glow in the dark - your bat is way more huggable and way less freaky than that - and the t-shirt for some reason makes me think of "giant purple people eater" (though it is not purple) - which is a cool song to sing (about 200 times) until your parents beg and then order you to never do so again.

Love the room sign myself. I'm with Elizabeth on the purple people eater. Alexander will be growing up with so much cool artwork. Where's he going to put it all?

All of these things are perfectly adorable. I especially love the bat.

I hope you go ahead and give them to him.

My 3-year-old says, "Is that mine bat? Can I have that bat, mama?" There's you go. the Judgment is final.

the bat is going to get loved and chewed to shapelessness anyway.

As for the t-shirt, it is clearly a slime monster and as such, is sliming. Not that anyone will notice when it is (a) wrapped around a child rather than spread out on a table, (b) has the cuteness of Alex's grin on top of it to distract attention, and (c) is covered in chocolate dribble, blackcurrant squash dribble, and unidentified dribble after thirty seconds of wear.

PS that is a stunning door plaque.

On a more interlectual note, (because my other paper just ran out?)
Very late last night I tried to watch a TV program about J.W.M. Turner, wot painted some pretty pictures.
Seems he also had a darker side the results of which have been mostly kept hidden Paintings with scenes of terror and considered to carry grand messages about life and death and man's inhumanity to man and all.

Maybe we could analise the "Bat" In this way and give it great deep meanings and lessons which would make it even more valuble to a growing child.......

This is the cutest bat ever - in colour as well as in black and white. Alexander will love it!

Thank you so much everyone! You are all very kind, if having dubious aesthetic tastes.

If Becca or Sage's little one would like me to make them a bat, I would happily do so, although I must warn you that my next attempt at bat-making might produce a bat or superior quality, which might therefore lack some of this bat's alleged charm.

Elizabeth, I now have to hunt down the Purple People Eater song... Mary's slime suggestion is a good one and yes, Nobby, I'm sure what I was trying to say with the bat was something about the deep existential paradoxes of the human condition (or some such, with lots of syllables).

Bats *are difficult. I have a half-finished, misshapen (as opposed to somewhat wrinkly) and frankly repulsive bat firmly stuffed to the back of a cupboard. At least Alexander's is cute. (Not my favourite adjective, but applicable. & suitable.)

I would absolutely LOVE a bat.

Can I give you some money for materials or owt?

Becca, okay I'll do you one. Don't need anything - should have enough fabric in my leftovers. :-)

I LIKE your bat. It's very 'Mona the Vampire' (Kids TV prog.)

There's no shame in producing the hideous if it's made with love
;-) After all, have you seen some of the things I've been inflicting on relatives and friends lately. Keeps my hands busy, so why shouldn't I share

hi, you've got great posts in your site. gotta give you credit for that. found me some articles too in your site i think are worth bookmarking, thanks. keep it up.

jay
board and batten siding